The next generation Galaxy Z Flip might pack significant upgrades over its predecessor. Samsung has filed a couple of design patents for the Galaxy Z Flip 2 and both of them showcase a triple-camera setup on the outside. The original Galaxy Z Flip only has two cameras on the back.

The South Korean giant also appears to be considering putting a larger cover display on its next clamshell folding phone.

Dutch tech site LetsGoDigital have discovered two design patents Samsung has filed with the World Intellectual Property Office (WIPO). The accompanying sketches reveal that the next-gen Galaxy Z Flip doesn’t look too different than its predecessor from the inside.

However, Samsung is seemingly making some changes to its outer appearance. The company is looking to pack three cameras on the back of this phone but is undecided about whether to arrange them vertically or horizontally.

The Model A has a horizontally-arranged triple-camera setup with an LED flash on the side, similar to the original Galaxy Z Flip. This is a tried and tested design but it doesn’t leave enough space for Samsung to place a larger cover display.

Hence, the company is mulling a second design with a vertically-arranged triple-camera setup. In the Model B, the vertical arrangement of the cameras makes room for a bigger cover display. A bigger display on the outside could add greatly to the device’s functionality.

It’s unclear what type of sensor the third lens would be. The Galaxy Z Flip features a 12-megapixel primary camera and a 12-megapixel ultra-wide-angle camera.

Sketches in Samsung’s design patents showcase circular-shaped camera lenses. So it could either be a depth sensor or a macro camera. Or maybe Samsung would make the camera setup a little more flagship-grade by adding a zoom lens.

After all, the Galaxy Z Flip, despite its hefty price tag of $1,400, does not offer the greatest of specs. Samsung would want to improve things with the next-gen model. Do not expect a periscope zoom camera like on the Galaxy S20 Ultra, though.

As for the rest of the design, the Galaxy Z Flip 2 still has a centered-punch hole cut-out which houses the selfie camera, a side-mounted capacitive fingerprint sensor, and a USB Type-C port.

While a patent filing does not confirm that Samsung will actually go ahead with this design, it seems highly likely in this case. It remains to be seen if the company goes with the Model A or the Model B design. 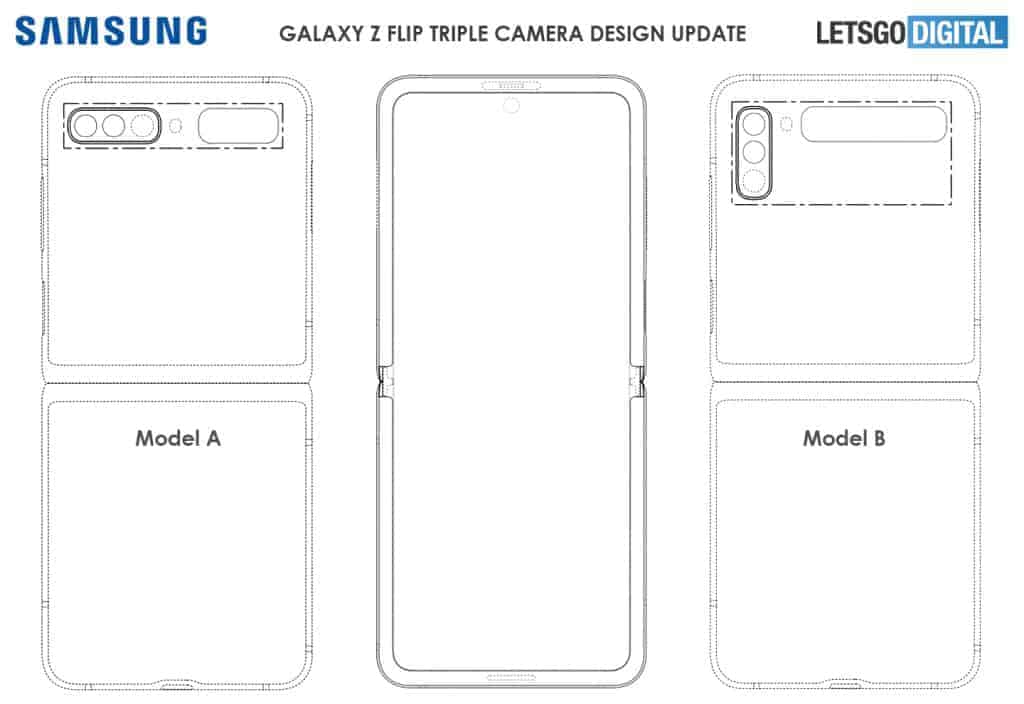