Skip to content
Advertisement
Trusted By Millions
Independent, Expert Android News You Can Trust, Since 2010
Publishing More Android Than Anyone Else
21
Today
178
This Week
155
This Month
3477
This Year
113530
All Time
Advertisement The Samsung Galaxy A51 was the world’s best selling Android smartphone in the first quarter of 2020. According to the latest research from Strategy Analytics, a total of six million Galaxy A51 units were shipped globally this past quarter. The Samsung mid-ranger accounted for 2.3 percent of the global smartphone shipment for Q1 2020.

A follow up to last year’s hugely popular Galaxy A50, the Galaxy A51 has been received well by consumers throughout the world. Samsung has even launched a 5G variant of this phone, but it only arrived in the second quarter.

“Samsung’s A51 smartphone is popular in all regions, particularly across Europe and Asia,” said Neil Mawston, Executive Director at Strategy Analytics.

Overall, 275 million smartphones were shipped worldwide during the period between January to March 2020. Android smartphones accounted for 86 percent (236.5 million units) of all smartphones shipped.

The impact of the COVID-19 pandemic on the smartphone industry is already visible in the first quarter shipment volume. The figures for the second quarter may look worse as the pandemic has caused disruptions across the supply chain. Strategy Analytics expects phone sales to drop about 17 percent annually this year.

According to the report, the Xiaomi Redmi 8 was the second most popular Android smartphone in Q1 2020. The handset captured a 1.9 percent share of the global market. Xiaomi’s Redmi smartphones have huge popularity in India and China, the world’s two largest smartphone markets.

The Samsung Galaxy S20+ held the third position with a 1.7 percent share. It is the only premium Android smartphone model in Strategy Analytics’ top-selling chart.

Samsung has two more models in the top six. The entry-level Galaxy A10s was the fourth-best selling phone in Q1 2020, while the slightly more expensive Galaxy A20s was the sixth most popular Android smartphone model. The two smartphones captured 1.6 percent and 1.4 percent of the worldwide market, respectively. The Xiaomi Redmi Note 8 sits in between at fifth with a market share of 1.6 percent.

Strategy Analytics’ report suggests that smartphone buyers are increasingly opting for affordable models than premium ones. This trend may grow stronger in subsequent quarters as the global economy has gone into a recession because of the COVID-19 pandemic. 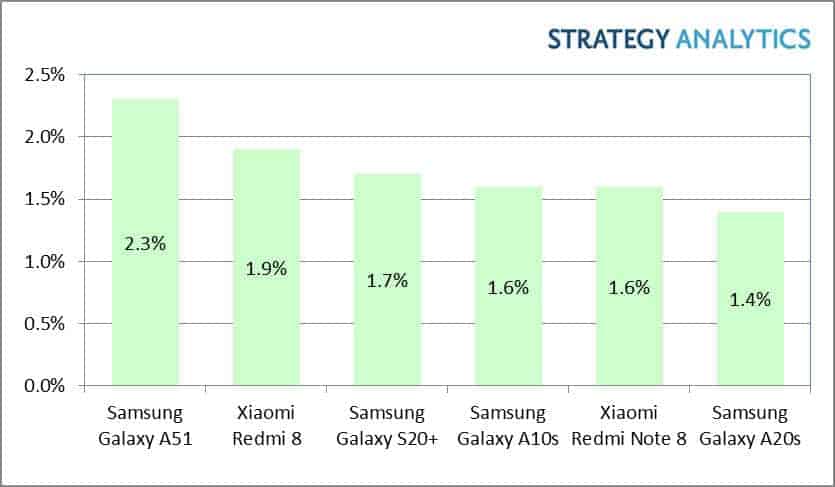