Skip to content
Advertisement
Trusted By Millions
Independent, Expert Android News You Can Trust, Since 2010
Publishing More Android Than Anyone Else
44
Today
64
This Week
91
This Month
4808
This Year
122378
All Time
Advertisement 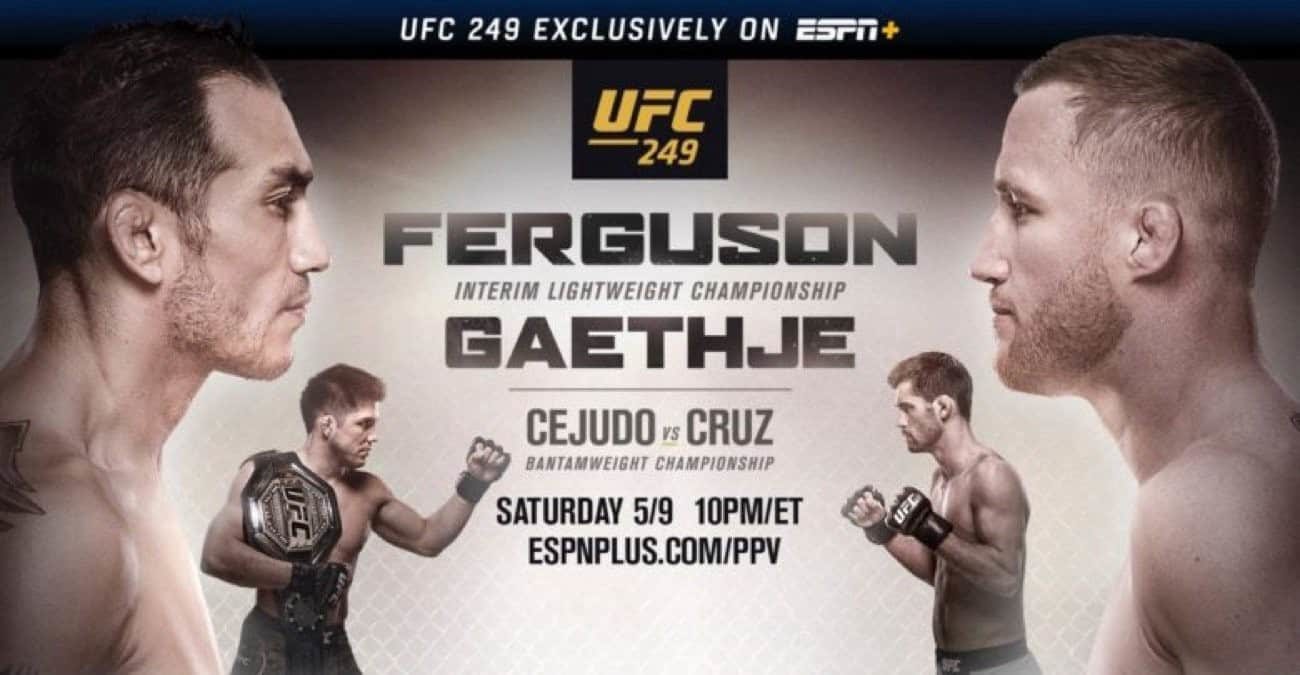 The only sports of the month (unless you count the WWE) is occurring tonight, and that’s UFC 249 headlined by Ferguson vs. Gaethje.

Many might say that UFC 249 has the best fight card of 2020. However at this point, many are just excited to see some sports. As we haven’t really seen any in almost two months now.

On the main card, there’s going to be five fights. Which include: Tony Ferguson vs. Justin Gaethje , Henry Cejudo vs Dominick Cruz, Francis Ngannou vs. Jairzinho Rozenstruik , Jeremy Stephens vs. Calvin Kattar, and Greg Hardy vs. Yorgan De Castro.

There are four fights on the prelims and three on the early prelims. Giving us a good amount of fighting tonight on UFC 249. In the prelims, you’ll see:  Anthony Pettis vs. Donald Cerrone, Aleksei Oleinik vs. Fabricio Werdum, Carla Esparza vs. Michelle Waterson, and Uriah Hall vs. Ronaldo Souza. And on the early prelims, there is: Vicente Luque vs. Niko Price , Bryce Mitchell vs. Charles Rosa,  and Ryan Spann vs. Sam Alvey.

As always, the early prelims start on ESPN+ at 6:15PM EST. With the prelims moving to ESPN at 8PM EST. And finally the main card starting at 10PM EST exclusively on ESPN+.

The UFC 249 PPV is going to cost you $65 for the main card – the prelims and early prelims are going to be free to watch. And of course it is exclusive to ESPN+. Now if you don’t already have an ESPN+ account, you’re going to need to pay $85. This is going to get you the PPV as well as a year of ESPN+ for only $20. And considering this is normally $4.99 per month, that’s a really good deal. And you’ll get access to a ton of other UFC content on ESPN+ as well.

You can order the UFC 249 PPV here, and the main card starts at 10PM EST tonight.