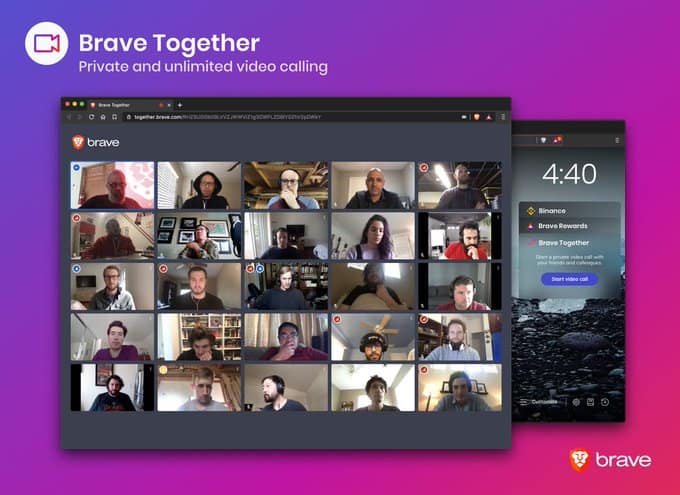 The stay-at-home order has caused a surge in usage of video calling apps. Over the last few months, we have seen the sudden rise of Zoom and Houseparty. The popular Chromium-based browser Brave is now coming out with its own video calling service called Brave Together.

Unlike other dominant players like Zoom and Google Meet, Brave Together will be end-to-end encrypted. This means your audio and video will stay private and secure from the outside world. It will also offer the service for free with support for unlimited one-to-one calls. Brave has built its video calling service based on the open source platform Jitsi.

If you are not familiar with Jitsi, it has been endorsed by many security experts including the NSA whistleblower Edward Snowden. Currently, the video calling service only works with Brave's desktop browser and the user can access it by visiting its website (www.together.brave.com). In the coming months, Brave Together will be integrated into iOS and Android apps.

Alternatively, users can also use the Jitsi Meet app to attend video calls from other Brave users. Anyone can attend to the video call by simply visiting the link shared by the host. To avoid Zoombombers, there is even an option to create a password for video calls. As of now, there is no option for adding the virtual background, which is popular among millions of Zoom users.

No need to create an account to use this service

The user can also share the entire screen or limit it to just a specific application window or a Brave tab. There is also an option to share a YouTube video by adding the respective link. Users can also add their email address to automatically grab the gravatar. However, there is no requirement for creating an account.

Importantly, Brave also promises it will not log any activity. As far as the user interface is concerned, it is simple to use with no complicated options. We will see the potential of this new video calling service once users actually start using it. After almost four years of being in the development stage, Brave was officially launched in November 2019.

Brave had 8.7 million active monthly users and more than 3 million daily active users by the time of its official launch. The browser also includes "Brave Rewards" built on its own cryptocurrency called Basic Attention Token (BAT). It allows its users to earn money through cryptocurrency which can then be contributed to Brave-verified websites or content creators.