The Aura Blue Galaxy S20+ 5G has arrived in Europe. The new color variant of the Samsung flagship is now available for pre-order in the Netherlands. This particular variant was so far only available in South Korea and the United States.

In the Netherlands, the Aura Blue Galaxy S20+ 5G will be exclusive to T-Mobile and Tele2. The handset is priced at €1,099 for the 128GB variant. Unfortunately, it is not available in any other memory configurations as yet, reminiscent of how the Aura Blue Galaxy Note 10+ had a limited availability last year. The storage capacity is expandable by up to 1TB via a MicroSD card, though.

Both T-Mobile and Tele2 will open general sales for the Aura Blue Galaxy S20+ 5G on May 29. This phone should also be available to purchase from Samsung Netherlands online store. The company has yet to list the new color version.

Interestingly, Samsung also recently launched an Aura Blue color variant of the Galaxy Buds+. The new version is currently available in the US only, exclusively from Best Buy.

Every year, Samsung tends to launch new color options of its flagship smartphones a few months after the initial launch. The Galaxy S20 series is also getting the same treatment.

Samsung launched the Galaxy S20 series, which includes the vanilla S20, the S20+, and the S20 Ultra, earlier in February this year. The Galaxy S20+ initially arrived in Cosmic Black, Cosmic Gray, and Cloud Blue color options in the Netherlands.

It is now getting an Aura Blue paint job, which is a much darker shade of the blue color. The Galaxy S20 family also comes in Cloud White and Cloud Pink colors, but the S20+ gets neither.

Reports earlier suggested that all three Galaxy S20 models will get a Cloud White exterior. The S20 Ultra did get one, as promised, but the vanilla S20 and the S20+ haven't yet. As is usually the case, it largely depends on how well a particular color variant does in terms of sales.

In terms of specs, the Galaxy S20 features a big 6.7-inch 3200×1440 pixel resolution WQHD+ display with a centered punch hole. The display offers a 120Hz refresh rate and comes with an embedded ultrasonic in-display fingerprint sensor.

The European version of the Galaxy S20+ runs on Samsung’s 7nm Exynos 990 processor, with 12GB of RAM. It packs a 4,500mAh battery that supports 45W fast charging via USB Type-C.

For photography, the handset features a 12-megapixel primary, a 64-megapixel 3x optical zoom telephoto lens, a 12-megapixel ultra-wide camera, and a Time-of-Flight sensor on the back.

The front camera is a 10-megapixel sensor and it supports 4K 60fps video recording. The rear cameras can record 8K videos at 30fps. 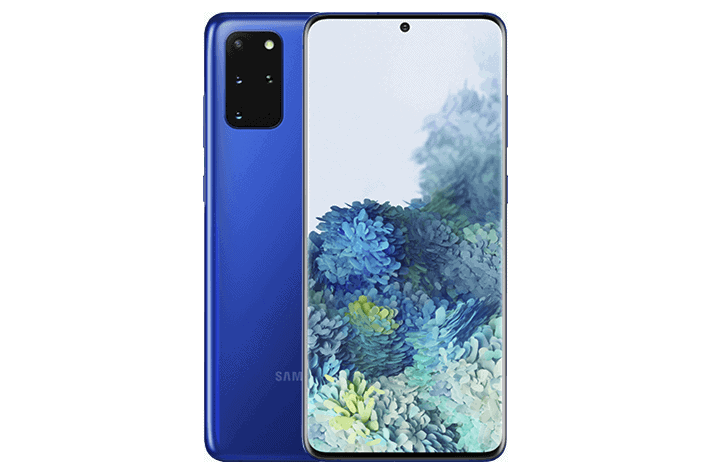