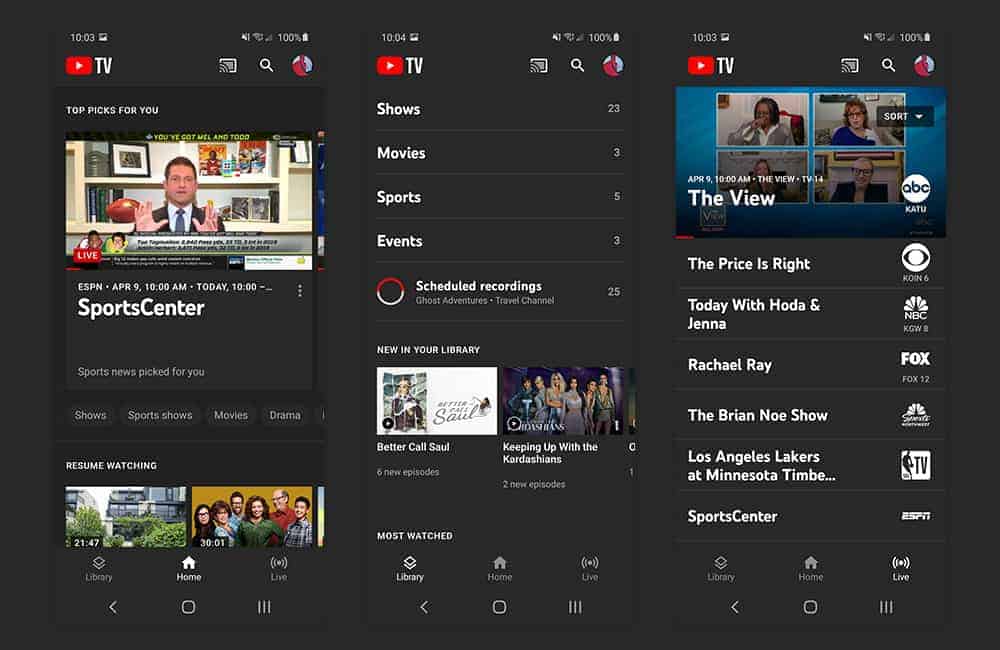 YouTube TV is finally getting a Dark Mode option, with the latest update.

The YouTube TV app has always been very white, which makes it great for adding a dark mode. But for some reason, Google took its sweet time rolling out Dark Mode to the app. That was until today. With today’s update, you can now enable Dark Mode.

There’s no toggle to flip on dark mode for the app. Instead, YouTube TV follows the system theme.

So as long as you have dark mode or night mode enabled on your device, then you will see the dark mode in YouTube TV.

It’s not a true black mode, which would be better for OLED devices – which are getting very popular these days. But instead, it is a dark gray mode with some true blacks involved. Much like the rest of the Google apps that have a dark mode now.

The update should be available for everyone now. Head to the Play Store and you should see an update waiting for you. If not, it’ll be available in the next few hours.

YouTube TV was one of the last Google apps to go dark. And it’s good to see that it is finally here.

YouTube TV was really already the best live streaming TV service out there. But now with this update, it has cemented that position.

Many other streaming TV apps don’t even have a dark mode. But YouTube TV does. And it has a number of other features that other services do not have. Like unlimited cloud DVR, as well as supporting all of the locals in almost every market in the US. That right there is a really big deal.

YouTube TV isn’t cheap, but it is a good deal. For $50 per month, you get 40+ channels, with more being added all the time. The biggest omission when it comes to channels is the Viacom channels. That includes BET, Comedy Central, MTV and a few others. But you can get those with Philo for just $20 per month. Which when paired together, you’re getting a really good deal. And there’s no cable box.

You can sign up for YouTube TV here. It’s a really great service and the unlimited cloud DVR is hands down the best feature of any live streaming TV service.