It seems like Huawei cannot survive without U.S.-made materials after all. A teardown has revealed that the newly released Huawei P40 Pro contains components made by three American companies.

Interestingly, the company’s last flagship phone, the Mate 30, had no U.S. parts. A return to U.S.-origin technology implies that perhaps diversification isn’t so easy after all.

Huawei has been put on an entity list by the U.S. This means that the company cannot source parts from American firms without explicit permission. Things between the Chinese giant and the U.S. are messy it is and it surely wouldn’t want to complicate things further by circumventing the ban.

However, a teardown by the Shenzhen-based XYZone has revealed that the Huawei P40 Pro does have made in America parts. The phone’s radio-frequency front-end modules have been supplied by Qualcomm, Skyworks, and Qorvo. It goes without saying that these are all U.S. manufacturers.

Front-end modules kind of work like networking cards, allowing handsets to connect with wireless technologies. Without them, your phone will not be able to connect to cell towers.

Qualcomm has sought permission to continue business with Huawei

The report claims that Qualcomm obtained a license from the commerce department to supply to Huawei. It’s not known if Qorvo and Skyworks did the same.

However, evidence suggests that the two never really broke off ties with Huawei. For instance, when Skywork recently slashed its revenue guidance for the second quarter over coronavirus-fueled fears, it did list Huawei as a prominent customer.

Similarly, a report from last year shows that Qorvo was still selling select products to Huawei after the trade ban.

American companies have time and again requested the government to revisit the ban. That’s because Huawei is a key customer for many of them.

The use of U.S.-made parts in the P40 Pro shows that Huawei is still heavily reliant on the country. However, it’s worth mentioning that it has successfully managed to replace components like power management chips, and WiFi and Bluetooth chips. However, antenna switch and power amplifiers are two components where U.S. vendors seem to have an edge. So, replacing these is going to be hard.

And, of course, making an operating system of its own is going to be another hurdle. The newer Huawei phones come without Google’s app and services, which can be a real downer for a good many consumers.

The latest teardown also shows that the company has moved away from Micron. Instead, it used Samsung NAND flash memory chips for the P40 Pro.

That said, Huawei is still keen on working with U.S. firms. The company has reiterated that it complies with all export control regulations and it gets product materials legally.

The U.S. still dominates a lot of areas and sidelining it is kind of not possible.  However, Huawei is clearly preparing for the worst-case scenario. The ban has been in place for nearly a year now and it’s not clear if it will be lifted anytime soon. 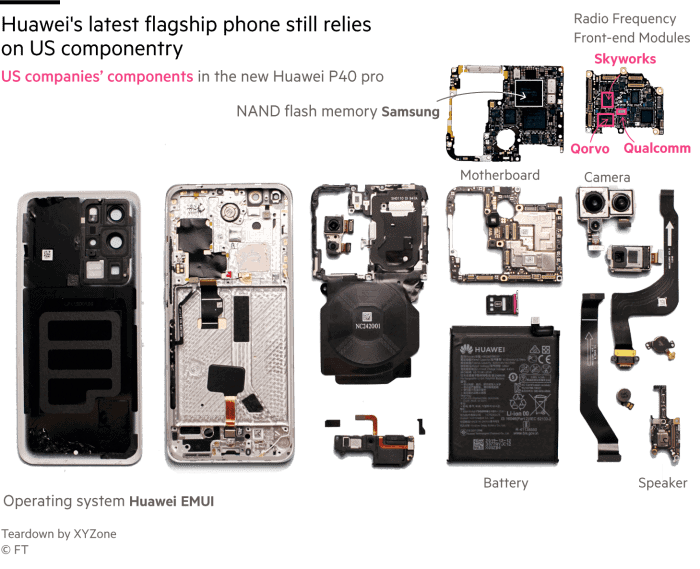