When you think about football games you’re probably thinking of Madden, but more casual football games can be some of the best. Madden is definitely more recognizable, and that’s fair because it’s a household brand that has been growing for more than two decades.

Games like Madden also have a lot going on and they aren’t always the best options for killing ten or fifteen minutes, unlike casual football games which don’t require a lot of your time or concentration because there’s usually a lot less mechanics to deal with.

We’ve picked out some of the best casual football games on Android and have laid them out for you here so you have something to do now that you may have all this extra time at home.

If you like sports betting you can also check out bet365 application for Android, which is an online casino app that lets you bet on more than just football.

If you’re just interested in the casual football games, you can view the list of games below.

If this game looks and sounds familiar it’s because we’ve talked about versions of it that are themed around different sports in some of our other lists.

You may know the drill then with this game. It has easy to learn controls that are designed to have you swipe across the screen and up and down the screen for running down the field, passing the ball, and the like.

A big draw here with Blocky Football and really any of the other blocky sports games is the characters. You have loads of them to unlock in this game and most of them. With Blocky Football in particular there are over 80, so you’ll have to play quite a bit to get them all if you want to collect every single one there is.

Beyond the character unlocks, the game is simply fun to play and is pretty darn casual. It’s a no-stress game option that centers around a fun sport. And one of the best casual football games around.

With Boom Boom Football you’re not only getting one of the best casual football games but also one that’s a little more interactive than the first game on this list. The graphics aren’t half bad either, which only adds to the allure and the fun.

The core of the gameplay is card-based here. It’s not a card game, but you do collect player cards which you can play at certain points during the game and they have an impact on what transpires.

There are also five different card classes, with all-star being the best so keep an eye out for all-star cards if you want the best players on your team.

Speaking of teams you’ll create one in Boom Boom Football and attempt to take that team to victory against your opponents. The aim here is one-on-one gridiron matches, with cool little elements like tapping on the screen at the right time for better passes or kicks.

These are called the highlight reel gameplay moments and they basically look visually just like a little highlight reel. It’s a cool and fun little measure that was added into the game and makes for a nice change of pace from the rest of the game. If you’re on the hunt for a good casual football game definitely give this one a try because it’s one of the best ones. 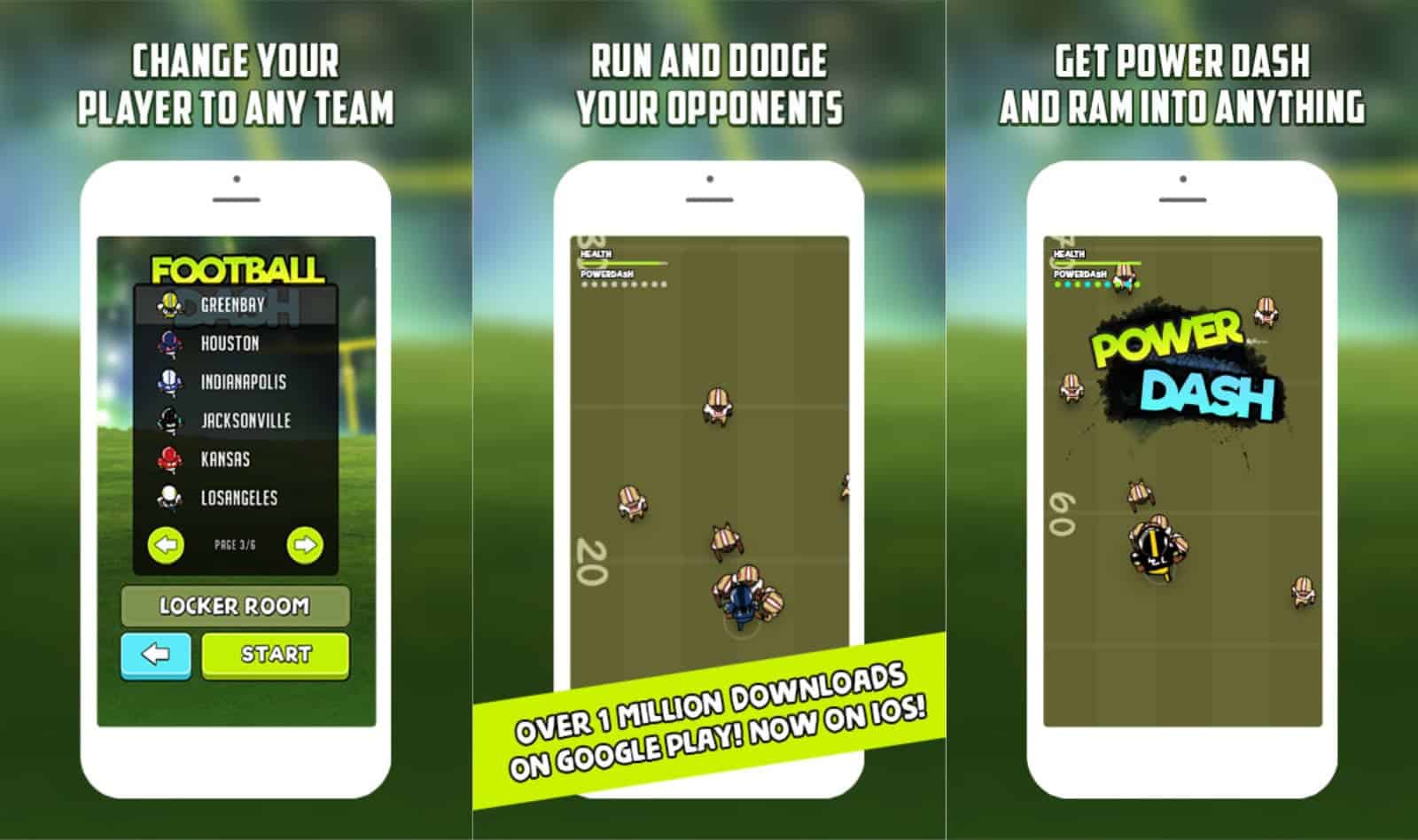 Football Dash is basically a football-themed endless runner, and honestly it’s a lot more fun than you might think.

As with any endless runner the goal is to see how far you can get before you lose the round. As this is a football-themed game, you lose as soon as you’re tackled to the floor. So dodge any opponents from the enemy team that you can.

Your score increases as you score touchdowns, which will pop up throughout the run. There are also lightning bolts to pick up on the field that can help give you a little boost. If you grab enough lightning bolts you can trigger the Power Dash boost, which lets you lay your opponents out like they were nothing. That will teach them to stand in your way.

Until you get the lightning bolts though, you definitely want to move around the field and avoid any opponents. Controls are super simple as you’re doing is touching the screen to start and then dragging your finger around the whole time.

Definitely don’t pass up the opportunity to try this game if you like football games and have wanted something a little more casual. It does have leaderboards, which is nice, if you want some form of competitiveness added. 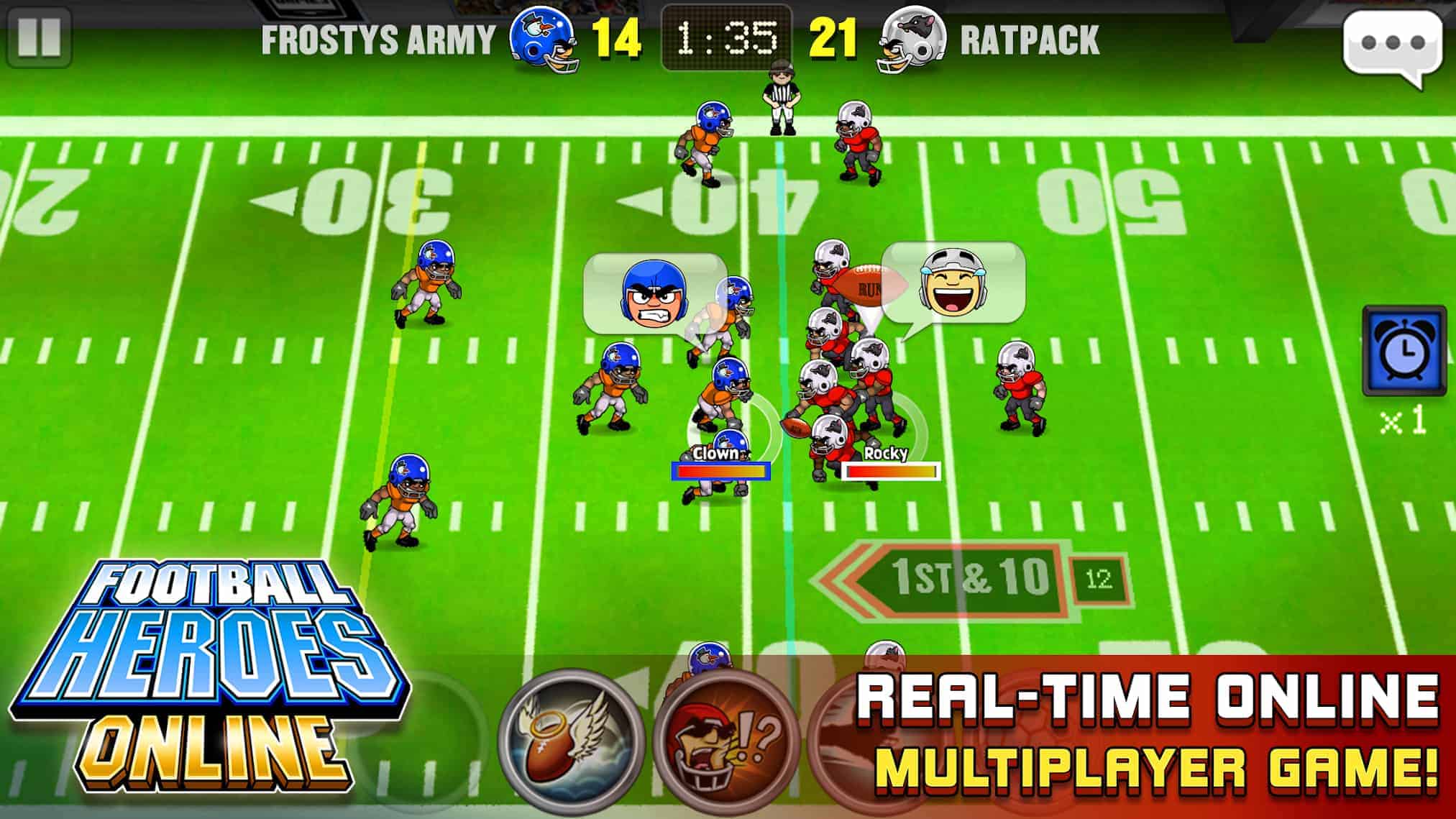 This is a real-time multiplayer game, but it’s casual enough that it fits in this list. The one thing that feels a little out of place is that you can actually punch your opponents. That’s not necessarily a bad thing, and adds some variance to how you get things done and score those touchdowns.

Your players are also capable of being leveled up. Giving them better stats and access to more powerful abilities. There’s cross-device play too. So you can easily move your game from device to device without losing any of your progress. Play on your tablet one minute and then on your smartphone the next.

While the main bulk of the game might be played online against players from around the world, Football Heroes Online does support local Wi-Fi, which means you can play against your friends while hanging out. This is certainly one of the best casual football games out there, and worthy of looking into.

Last on our list is probably the most fun, and it could even be the most casual game on the list. It’s called Football Field Kick and all you do is attempt to kick the ball through the field goal posts.

The controls are really simple here and don’t require a lot of concentration. Making this super casual and easy to pick up and play as well as easy to learn.

In addition to kicking field goals and making them, you’ll also be able to play a mode where you just see how far you can kick the ball.

There are trick shots to complete as well, and the more you play and level up the more you can unlock to improve your stats. Which in turn will allow you to kick the ball further. Thus letting you reach higher scores.

The game offers pretty decent graphics for as simple as it is, and you have various other things to chase and unlock like other characters as well as new footballs with wildly different designs.