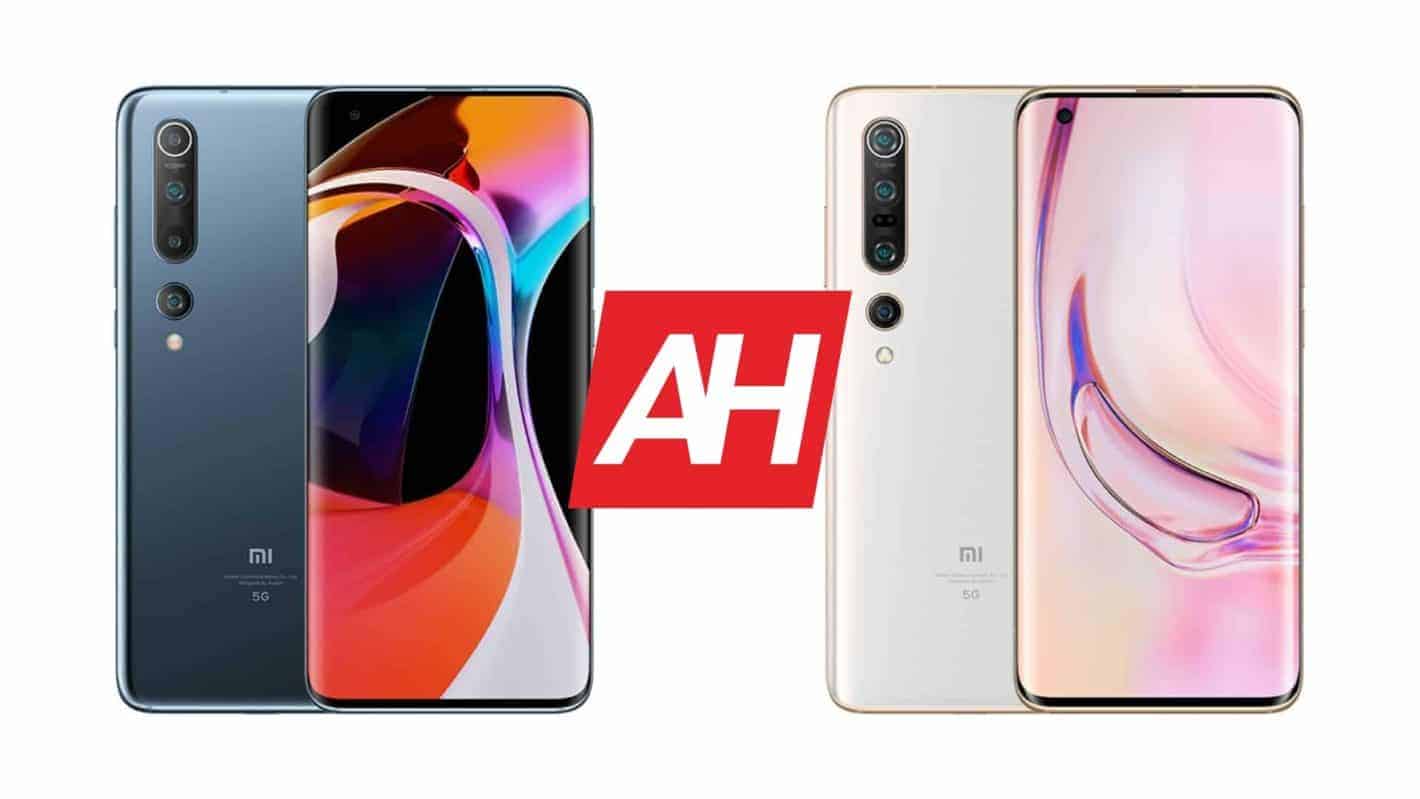 Xiaomi had introduced global variants of its new flagship smartphones quite recently, and it's time to compare them. In this article, we'll be comparing the Xiaomi Mi 10 vs Xiaomi Mi 10 Pro. These two smartphones actually have a lot in common. There are some differences between them, but they have way more similarities than differences.

These two smartphones were originally announced last month in China. It took the company about a month to announce them globally, and the delay can be blamed on the ongoing pandemic. Xiaomi was planning to introduce the two phones on a global scale during the Mobile World Congress in Barcelona. That trade show never happened, so the company postponed its launch date.

In terms of the design, well, these two phones are basically the same. The only difference that you'll notice is on the back, as the 'Pro' model has a larger main camera module. It offers a more powerful camera setup, so its sensors are larger. Not all of them, but it's enough to make the camera module larger than on the regular model. In every other way, when it comes to the design, these two phones are the same. They even share the same dimensions.

Both of these phones are made out of metal and glass. They're both quite slippery, and both offer curved displays. The back side on both phones is curved, which makes them feel nicer in the hand, but doesn't really do much to help with the slippery factor. Bezels on both phones are extremely thin, as you can see, while there's a single display camera hole on both phones. It's located in the top-left corner.

Both devices offer four camera sensors on the back. Three cameras are a part of the same module, and are vertically-aligned. The fourth is separated, below the main camera module. The phone's camera module protrudes on the back, and an LED flash is placed right below all those cameras. Speaking of which, the camera module is placed in the top-left corner on the back. Xiaomi's branding is only visible on the back of these two smartphones. Considering that the two phones are almost identical when it comes to the design, this section is a tie.

What about the display? Well, these two phones have the exact same display. They both come with a 6.67-inch fullHD+ (2340 x 1080) Super AMOLED panel. That display offers a 19.5:9 aspect ratio, and is protected by the Gorilla Glass 5. It can reproduce HDR10+ content, and it's a high refresh rate display. We're looking at a 90Hz display here, with 180Hz touch sensing. It's also worth noting that the Mi 10 and Mi 10 Pro offer an 89.8-percent screen-to-body ratio.

They include the same display, but is it any good? Well, yes, it is. Pretty much every mainstream flagship these days has a great display. Once upon a time, the difference was extremely noticeable between flagships, but that's no longer the case. Pretty much every single one of them has at least a fullHD+ OLED panel, and they're all good. The Xiaomi Mi 10 and Mi 10 Pro are definitely not an exception to the rule.

This display looks great. The colors are punchy, it gets bright enough, and blacks are quite deep, as you'd expect out of an OLED display. This panel also offers great viewing angles, which is equally as important. You'll be hard-pressed to see this is not a QHD+ display, which is only a testament to the quality of this panel. Considering that the two phones have the exact same display, it's a tie.

What about the performance? Well, These two phones both come with 8GB of RAM, well, their global variants do. We're looking at LPDDR5 RAM, which is backed by UFS 3.0 flash storage. The Snapdragon 865 fuels both phones, while they feature the same display. Considering all that, the performance is exactly the same. The two phones have, for the most part, the same software as well.

These two phones are extremely snappy. The performance is second to none. They both open apps really quickly, the same goes for games, and multitasking is also a breeze. No matter what you do, chances are you won't be able to bog down either of these two smartphones. They're also really great for media consumption as well. These two handsets come with beastly specifications, and the company's well-optimized software only helps things.

MIUI 11 comes pre-installed on top of Android 10 on both of these phones. MIUI has come a long way over the years, and it's now one of the most compelling iterations of Android. Considering that the performance is exactly the same, so is the score here, it's a tie.

The battery situation on these two phones is quite interesting, actually. They offer the same SoC, display size and resolution, and so on… but not the same battery capacities, nor charging. The Xiaomi Mi 10 actually comes with a larger battery. The phone includes a 4,780mAh unit, compared to a 4,500mAh one on the Mi 10 Pro. The Mi 10 Pro does offer faster charging though.

The phone offers 50W wired charging, compared to 30W charging on the Mi 10. Both devices have support for 30W fast charging, though. Now, many people would probably take a 300mAh addition in battery capacity, rather than having somewhat faster charging. That especially goes for those of you who use wireless charging, as you probably don't care that much about wired charging either way. 30W wireless charging on these two phones is plenty fast, assuming you have the right charger for it.

What about battery life, does the Mi 10 offer much more in terms of endurance? Well, no, but it is noticeable. You may get half an hour extra screen-on-time on occasion, maybe not even that much. It all depends on your usage, of course. All in all, it may not be worth it over what Mi 10 Pro has to offer, which is faster wired charging. That being said, we'll go with the Mi 10 Pro here, as we believe it offers more in this category.

What about camera quality, though? Well, you'll be glad to know that both of these devices have plenty to offer in this regard. Both phones offer four cameras on the back, though the vast majority of those cameras are different. The only camera that is the same on these two phones is their main camera, a 108-megapixel one from Samsung.

You'll be glad to hear that it's quite a compelling camera, though. That sensor is placed behind an f/1.7 aperture lens, a wide-angle lens. PDAF is supported, so is OIS. The Mi 10 Pro also offers laser autofocus, unlike the regular model. Pictures taken with that camera turn out really nice, in basically all lighting conditions. The Mi 10 is still behind some phones when it comes to low light photography, but not by much. There's not much noise in such photos, while they turn out sharp enough, and also bright enough. Both phones tend to blow out lights during the night, not always, but sometimes.

When there's plenty of light, however, these cameras do excel. You'll get a ton of details and great dynamic range. Considering how large this sensor is, you'll also get really nice bokeh effect in some shots. The Xiaomi Mi 10 Pro does take better ultrawide photos, though. It has a more compelling camera for such photography, especially for daylight. If you activate that camera in nighttime conditions, the difference will be even bigger between the two phones. If you plan on doing a lot of zooming with your phone, and taking such, telephoto shots, the Mi 10 Pro is the phone for you. All in all, the Mi 10 Pro does offer more in the camera department.

As far as audio is concerned, well, these two devices are exactly the same. They both include stereo speakers, and no 3.5mm headphone jack. The output is the same. You'll get some decent audio on these two phones, but don't expect miracles. The audio is really good both through the speakers, and when you plug in your headphones… or use Bluetooth ones. Providing that they're a solid pair of headphones, of course.

The speakers can get plenty loud, while the distortion is somewhat noticeable, but only when you turn the volume all the way up. Mids are the strongest point of the phone's speakers, and the same goes for audio through headphones, actually. Lows and highs are not that bad either, though. All in all, the audio experience is really good, only audiophiles will find things to complain about.

That brings us to the end of our Xiaomi Mi 10 vs Xiaomi Mi 10 Pro comparison. The bottom line is, these two phones are extremely similar. The Mi 10 Pro will give you some advantage in the camera department (mainly with secondary lenses), and faster wired charging… but that's about it when it comes to differences. The 'Pro' did technically win this comparison, but if we had to recommend one device, it would probably be the regular variant. Paying extra €100 to grab these very few advantages that the 'Pro' offers is probably not worth it for the vast majority of you. If you think they are, go for it, of course.