Call of Duty Mobile is one of the best mobile games out there, but it has a big problem. The game's Lucky Draw system.

This has been around since the launch of the game, so it's nothing new. But only recently did it start to feel more glaring just how big the issue is.

See, Tencent, Timi Studios, and Activision recently rolled out some changes to the game that made a lot of players happy and upset many others. This change in particular was the inclusion of the new bundles.

First world problems. I know. But it's still an issue that the developers need to address. Because it's taking a huge number of the player base and making them feel underappreciated for all the time and money they've already invested in this game.

Bundles, if you haven't been keeping up on the subreddit, have replaced the loot crates and the Lucky Draw. You can plop down a set amount of CoD Points (which you buy with real money) and just buy bundles that include themed weapon skins and other items.

The big problem is that the bundles are only available to a certain number of people. While everyone else is stuck with the Lucky Draw and crates. These are chance systems that may or may not reward you with the specific item you're hoping to get. Whereas the bundles are a guarantee.

Now, maybe you only want one or two items out of one bundle, so you pay the $20 or $25 that it would cost. If you're stuck with the Lucky Draw, then you're likely going to end up spending all $115, because the chances are so low for the best items at the very beginning that getting the one you want on the first spin feels nearly impossible. 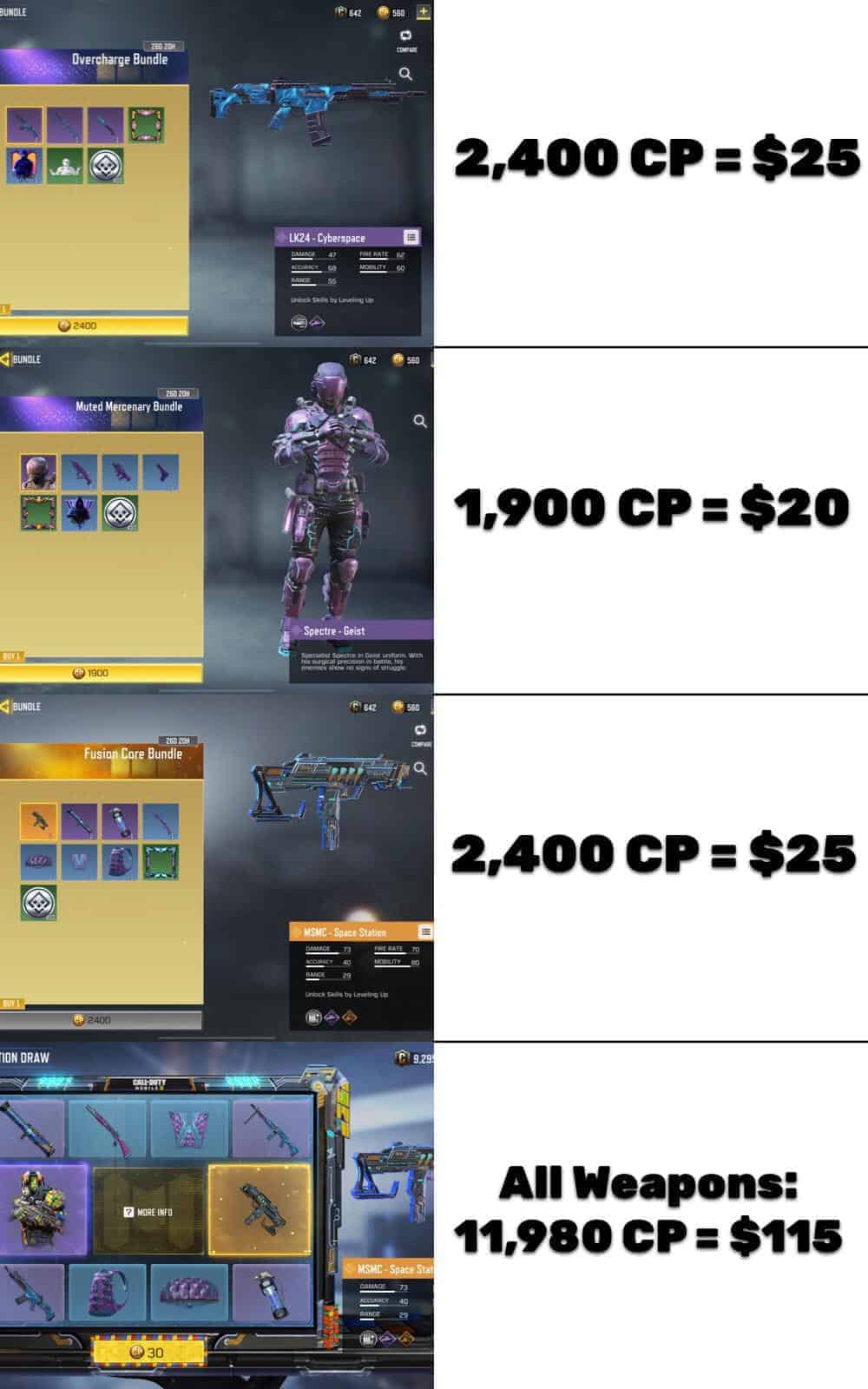 That's easier said than done for many players. Tencent and Activision know how to make micro transactions in this game enticing. And while it might not be an issue to pass on these things for some, others may find the desire too great to pass up.

I personally have passed on spending any money at all on these IAPs. Because it feels like a slap in the face of the players. And other players are taking notice. The subreddit community is filled with posts that showcase how the players feel about the systems in place for purchasable items.

Placing things in what is essentially a gambling system doesn't sit well with players and it never has. Perhaps the silver lining is that Tencent and Activision seem to be attempting to shift away from this.

But until it rolls out the bundle systems to everyone, it can't begin to set things right with many who have been with the game since the beginning.

There are numerous posts on the subreddit that are calling for players to boycott both the crates and the Lucky Draw spins until bundles are rolled out fully to all players. Hopefully this has an impact, but there's no guarantee that the developers will implement any of these changes. 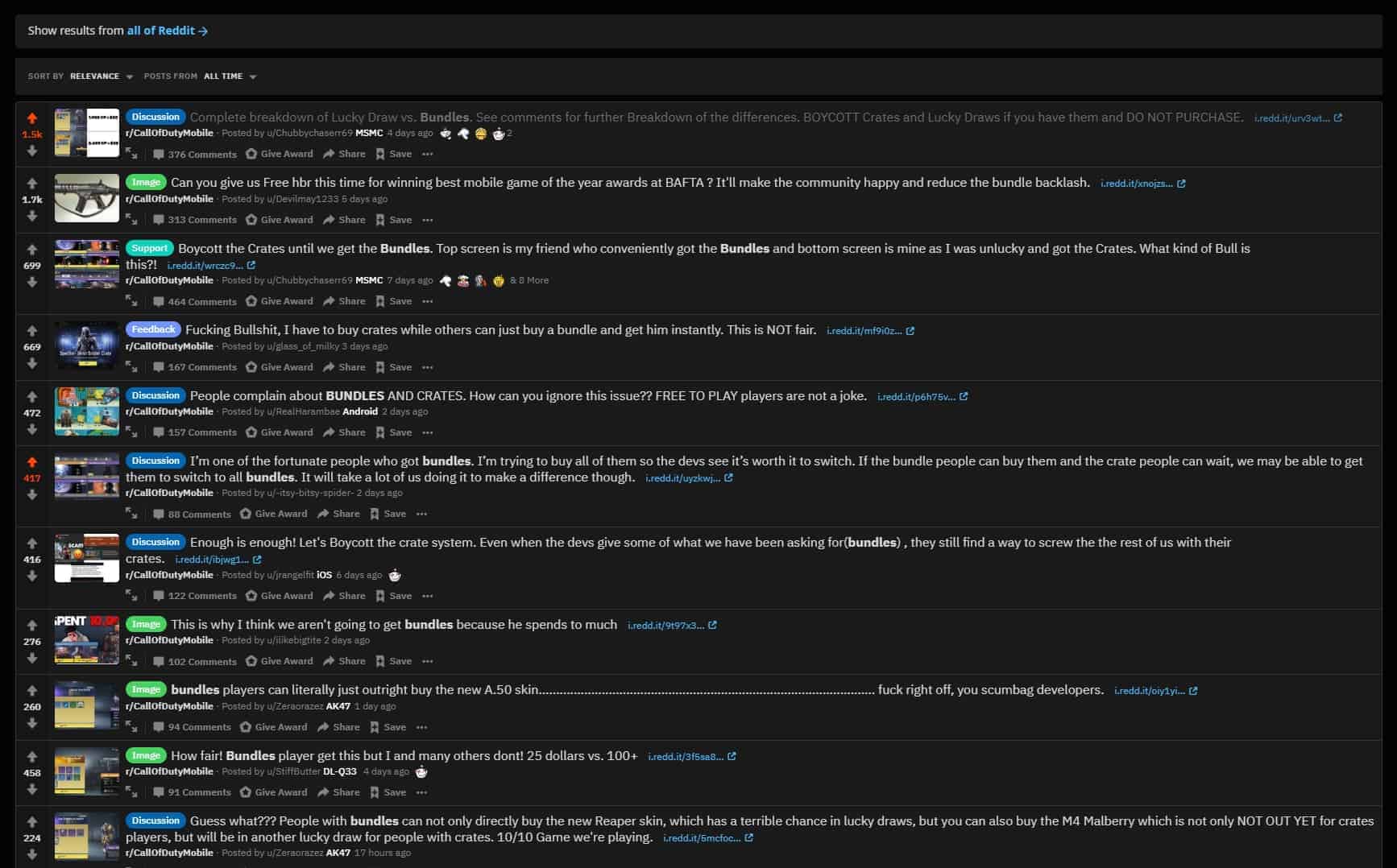 There's no rhyme or reason – at least it seems that way – to how bundles are being activated for players.

Many seem to be under the impression or claiming that RNG is greatly increased for entirely new players. While it's fairly low for players that have been around with the game for a lot longer.

I have been playing since the launch of Call of Duty Mobile on October 1 last year. I didn't get bundles in my account. So I decided to test this theory of new players getting bundles by creating a completely new account as some others have suggested.

I still didn't get bundle access. I tried a couple more accounts too with the same results. So, not all new players are being given bundles to encourage spending. It seems to be a random occurrence and you simply get them or you don't until the developers decide to roll them out to everyone. If they ever do.

Don't spend the money on crates or the Lucky Draw

While it may do nothing at all, choosing to hold off on spending money on the crates, which are a complete chance to get something you like, might be the only way to get the attention of Tencent, Activision, and the developers.

The more they see players are choosing not to spend their money on gambling within the game, perhaps the better the chances that they will simply give all players the option to spend money on a guaranteed item acquisition.

Most players would be inclined to spend the money on these micro transactions if they were guaranteed to get the item they want. Bundles aren't exactly the best implementation of this. It would be better if players could just spend the CoD Points on single items.

But, bundles are much better than the chance draws and crates. If you're a player that's upset or frustrated with not having the ability to buy specific items outright, save your money and don't spend anything on the game until things change.

Call of Duty Mobile has a big problem with the Lucky Draws and crates. And it's a problem because players are fed up with the unfairness of the way the system works. Many and more are going to stop spending money on the game until a better system is available.

Money talks. And if enough players stop spending money on the gambling systems, eventually things will change. Because Tencent wants to make money off this franchise.

The game is fun to play. The devs have done a great job designing it too. So here's to hoping that Tencent will make the changes to remove chance-based micro transactions systems. If it does, more players are more likely to spend their hard-earned money. Which in turn would bring in more profits for Tencent.