Motorola is preparing to launch its Edge series in a few days, and the latest leak shows the Edge stopping by Geekbench with 6GB of RAM.

The Geekbench scores were uploaded on April 14th. The device name is “motorola edge.” There’s a Qualcomm processor with 8 cores. The device shows 5.32GB of RAM. It seems close enough to 6GB of RAM. One must take into account the operating system.

In this case, the Motorola Edge features Android 10 out of the box. Android 10 occupies some space, and that seems to be part of why the RAM reads “5.32GB” instead of “6GB.”

As for the octa-core processor (having 8 cores), rumors say that the Qualcomm SoC in question is the Snapdragon 765G instead of the 865. That makes sense, as the Edge seems to be a “lesser” model than the Edge Plus.

The Edge Plus arrived on Geekbench earlier this year with 12GB of RAM. Its single-core and multi-core scores are 4106 and 12823 points, respectively.

The regular Edge model’s performance at Geekbench results in 6GB of RAM with 506 (single-core) and 1410 (multi-core) points. It’s easy to see that the Edge won’t have the same power as the Edge Plus.

The Snapdragon 765 SoC comes with a 5G modem and eight cores on a single chip. It is a step down from the Snapdragon 865 that features a 5G modem and SoC cores on two separate chips. The Edge model will likely cost less than the Edge Plus, as Motorola is spending a lot less on the 765 SoC than the 865.

Alongside the 6GB of RAM and the Snapdragon 765 SoC, there are other specs that are known about the Motorola Edge. The Edge will feature a 6.67-inch punch-hole display, 90Hz refresh rate, a 25MP selfie camera, and a triple rear camera setup (64MP+16MP+8MP). Laser autofocus and dual-LED flash are present as well.

The new series could see in-display fingerprint sensors, though it’s too soon to know for sure. As for battery life, expect a 4,500mAh battery for the Edge with USB-C charging and 5G connectivity. The Snapdragon 765 SoC is, after all, a 5G-capable processor.

Motorola will have an online event on April 22nd at 11am CDT, where many believe the company will reveal the upcoming Edge series. 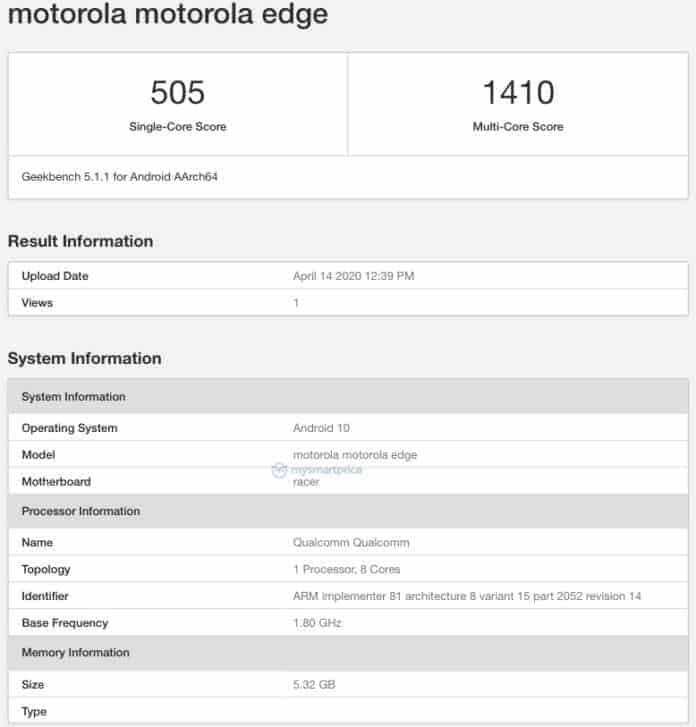