The Motorola Edge has been leaked extensively over the past few weeks, revealing most of its key specs. Now just days ahead of its April 22 launch, the device has popped up on Google Play Console, confirming some of the previously leaked specifications.

The official listing from Google confirms that the upcoming Motorola smartphone runs on the Qualcomm Snapdragon 765 SoC. This chipset comes with an integrated 5G modem, making 5G connectivity standard.

The Motorola Edge packs the Qualcomm Adreno 620 GPU and has 6GB of RAM. The handset will come with a Full HD+ display with a resolution of 2340 x 1080 pixels and a screen density of 440. It boots to Android 10 out of the box.

The Motorola Edge series marks the Lenovo-owned company's return to the flagship smartphone market and it has kept the rumor mill buzzing. Now the Google Play Console listing has further fueled the discussions.

Although the Google Play Console listing doesn't reveal the screen size or any other details of the Motorola Edge, we pretty much know it all courtesy the tons of leaks in the past. This device gets a 6.67-inch punch-hole OLED display with a 90Hz refresh rate.

It packs a triple rear camera setup comprising a 64-megapixel main camera, a 16-megapixel ultrawide sensor, and an 8-megapixel telephoto unit. There's also laser autofocus and a dual-LED flash on the back. The punch hole on the top left corner of the display houses a 25-megapixel front-facing camera.

A 4,500mAh battery fuels this device. It charges via a USB Type-C port but it's unclear what charging speed Motorola will offer. The handset is likely to be available in 64GB and 128GB storage variants.

Motorola also has a "Plus" version of the Motorola Edge in the works. The Motorola Edge+ is the company's first true flagship in nearly two years. Qualcomm Snapdragon 865 chipset, up to 12GB of RAM, a bigger 5,000mAh battery, better camera specs, and higher internal storage capacity differentiate the Edge Plus and the standard Motorola Edge.

Last month, Verizon more or less confirmed that it'll carry the upcoming Snapdragon 865-powered Motorola smartphone. It remains to be seen if the Motorola Edge+ will be exclusive to the Big Red at launch.

Motorola is holding an online event on April 22, where it'll likely introduce the Motorola Edge series of smartphones. 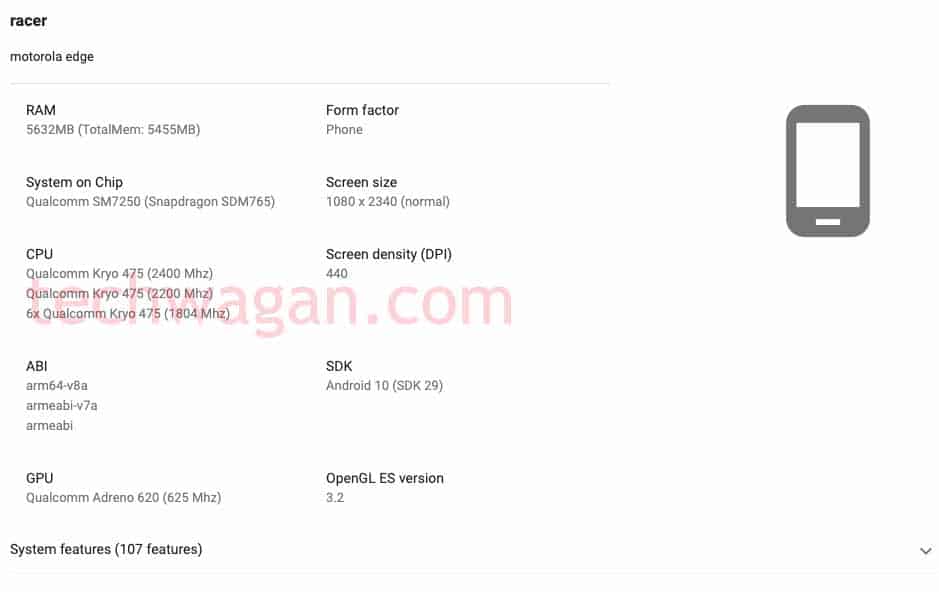