Samsung's Galaxy S20 flagships not only pack impressive hardware specifications but also get the newest version of One UI, the company's Android skin. The Galaxy S20, S20 Plus, and S20 Ultra all ship with Android 10-based One UI 2.1 out of the box. The Galaxy Z Flip also gets the newest One UI version.

Although Samsung has already released the Android 10 update to all of its eligible older flagships, the update only bumped the One UI version to 2.0. However, according to a Samsung community moderator in the South Korean portal, One UI 2.1 will eventually be pushed to those devices as well (via SamMobile).

The Galaxy S10, Note 10, Galaxy S9, and Note 9 will all get One UI 2.1 through a software update. The Galaxy Fold should also make this minor jump, although it was not mentioned by the community moderator.

There are a few subtle differences between One UI 2.0 and One UI 2.1. The latter is mainly targeted toward the new hardware found in the Galaxy S20 and Galaxy Z Flip phones. Features like the option to switch to 120Hz display refresh rate or the UI modification to support the fold on the Galaxy Z Flip are limited by hardware. Such features and UI tweaks won’t be available on any of the older Galaxy devices even after the update.

However, the newest One UI version should still bring a handful of new features to the older Galaxy flagships. While One UI 2.0 offers three screen zoom levels, One UI 2.1 adds two more levels on the scale. For the uninitiated, Screen Zoom lets you set how large or small the contents on the screen appear.

Samsung Quick Share is another such One UI 2.1-exclusive feature. It is a local file-sharing service for Galaxy smartphones and tablets, much like Apple’s AirDrop. Quick Share uses Bluetooth to create a peer-to-peer Wi-Fi network between connected devices.

One UI 2.1 also adds Spotify support in the Clock app, letting you set your favorite songs from the music streaming app as the alarm tone. Revamped AR Emoji, a new Music Share feature and streamlined Google Duo integration are also exclusive to One UI 2.1.

It's not clear at this stage if all of these features will make their way into older Galaxy flagships. Also, there's no timeframe as to when the One UI 2.1 update will start rolling out for these devices. Hopefully, it won't be a too-long wait. 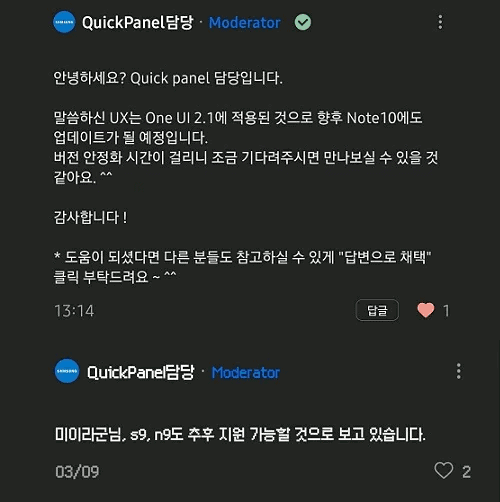