Samsung is not yet done pushing the One UI 2.0 update to all of its eligible models but reports about One UI 2.5 have already started surfacing. A moderator on the Samsung Community forum in South Korea has confirmed that the company is developing One UI 2.5.

The moderator, who’s a HomeScreen product manager at Samsung, didn’t reveal One UI 2.5’s complete feature list but confirmed that the upcoming version of One UI will bring Google’s navigation gestures to third-party app launchers.

Samsung has added support for Android 10’s UI navigation gestures in One UI 2.0. Users get the choice to either use the traditional navigation bar, where they can arrange buttons to their liking, replace those buttons with swipe up gestures, or use Google-style navigation gestures.

However, this freedom of choice is available only to those who use Samsung’s default launcher. If you swap the default launcher for a third-party launcher, you’ll have to forego Google’s UI navigation gestures as well.

Even One UI 2.1, Samsung’s newest Android skin, misses out on this ability. Luckily, One UI 2.5 will fix that. You’ll have to wait, though.

Samsung is developing One UI 2.5

If you have been using a third-party launcher on your Samsung Galaxy running Android 10, this could be a great piece of news for you. However, be mindful that One UI 2.5 isn’t going to be available anytime soon.

The Galaxy Note 20 series will likely be the first to get access to the upcoming software. It should be available to other Galaxy devices running Android 10 but it’s unclear how long you’ll have to wait. There is no timeline as of yet.

Samsung has yet to finish pushing One UI 2.0 to its eligible Galaxy phones. The company is also working on One UI 2.1 for its older flagships.

Only four Samsung flagships currently run the Android 10-based One UI 2.1, namely Galaxy S20, S20 Plus, S20 Ultra, and the Galaxy Z Flip. These devices ship with the updated version of One UI out of the box.

While devices like Galaxy A51 also ship with Android 10 out of the box, they only get One UI 2.0. The Galaxy S10, Note 10, Galaxy S9, Note 9, and possibly the Galaxy Fold will get One UI 2.1 through a software update.

One UI 2.1 adds features like Samsung Quick Share, Spotify support in the Clock app, and more to Samsung’s software. It remains to be seen what else One UI 2.5 brings. 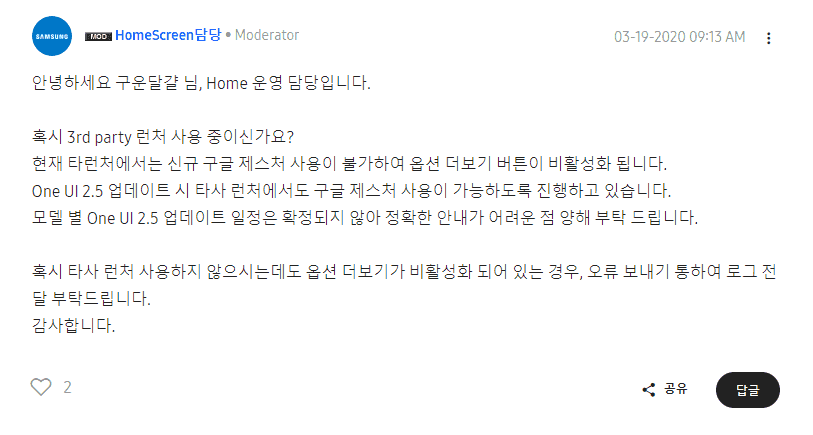