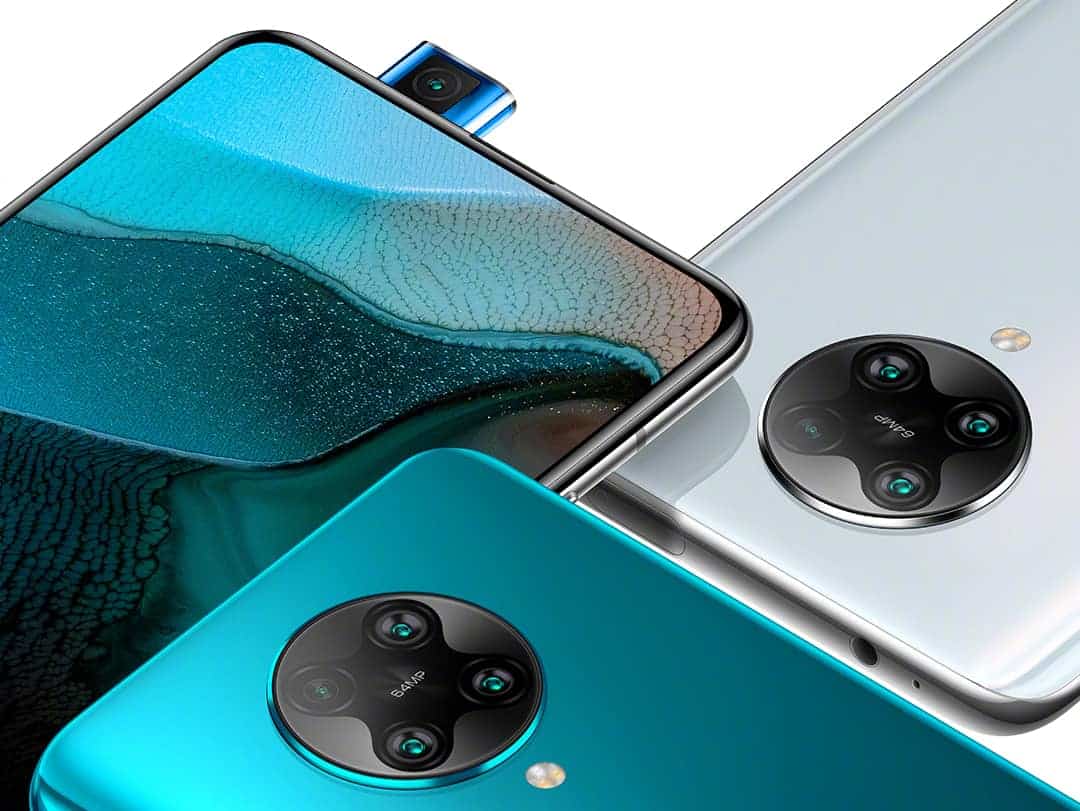 Redmi has shared more K30 Pro images, while it also confirmed some of the phone's features, such as 4D immersive tactile feedback. Let's first talk about the Redmi K30 Pro images that appeared, shall we.

In the last couple of days, Redmi shared blue-ish and white variants of the K30 Pro. Well, this time around, the company offers a purple variant of the phone. You can check out that image below this paragraph. 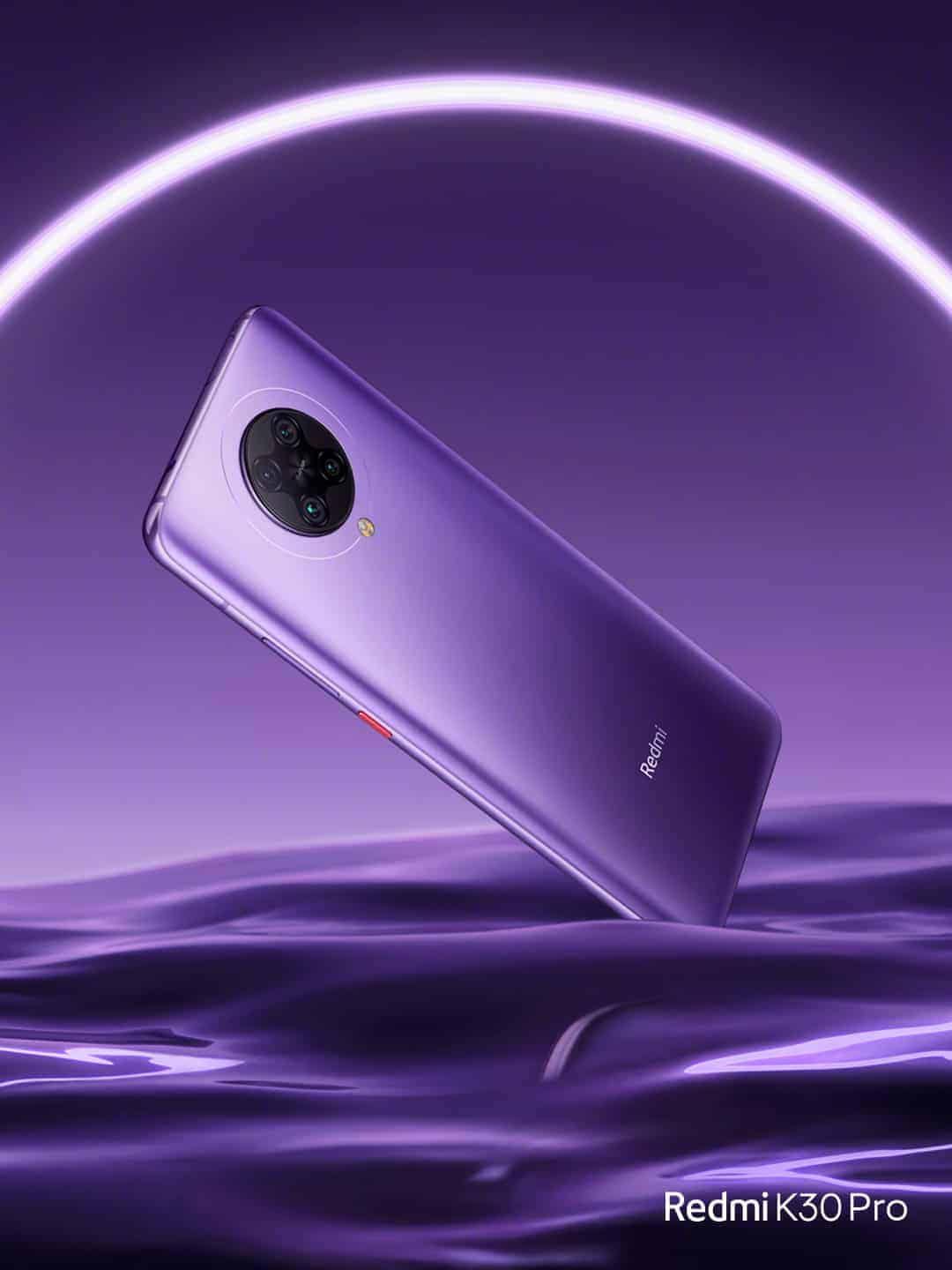 This image doesn't really show anything new, but it gives you yet another look at the device. You can clearly see its four cameras on the back, which are a part of a round camera module.

The company's logo is visible on the back, and the same goes for an LED flash. A power / lock button is placed on the right, and it's red-colored. The phone's volume up and down buttons are also placed here.

Another image that popped up shows a part of the phone's front side. If you take a look at the image below, you'll be able to see that the K30 Pro will include a pop-up camera. That pop-up camera will once again double as an LED notification light. 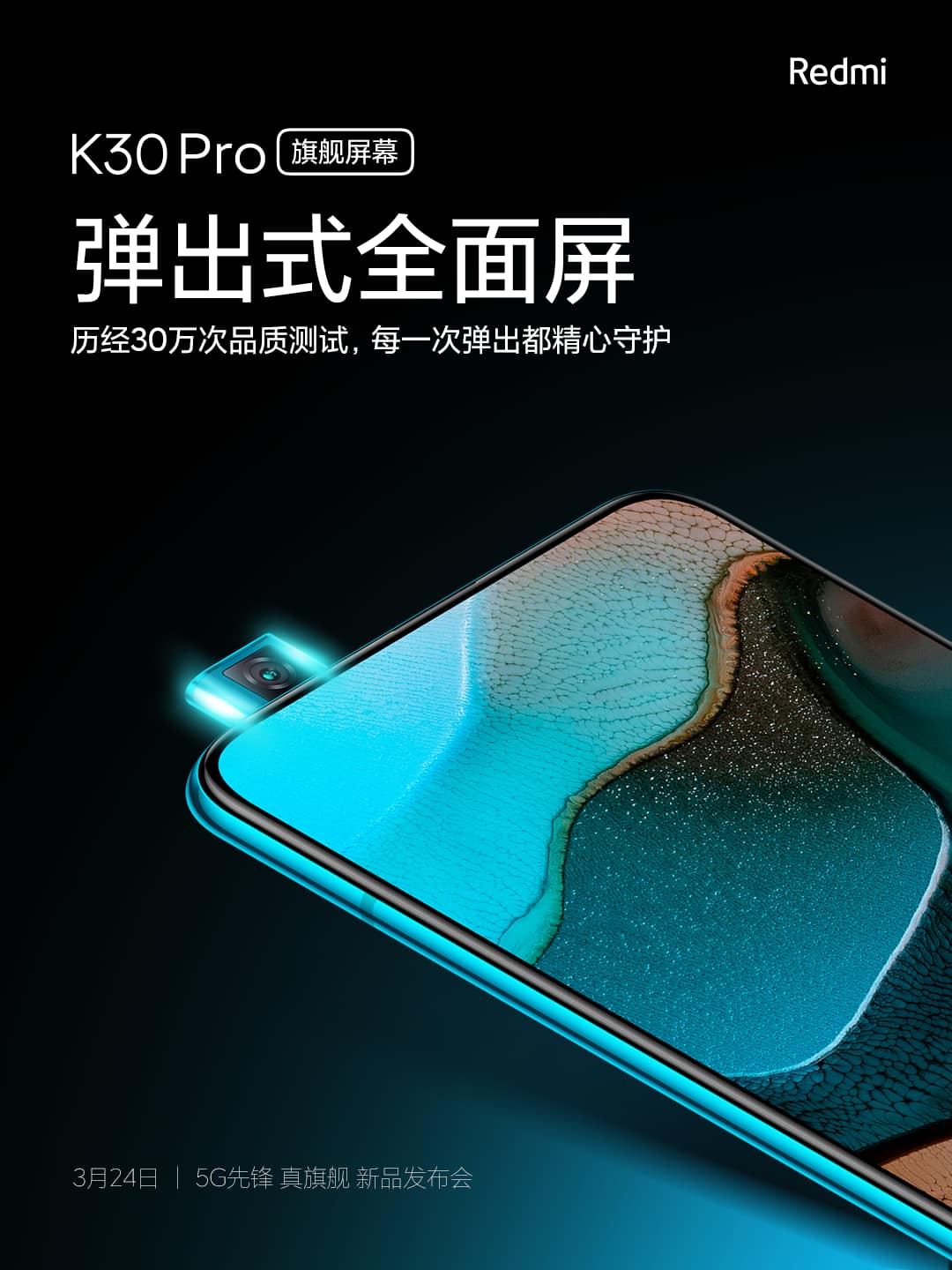 The pop-up camera will be much faster this time around

In the post in which Redmi shared this image, the company claims that the pop-up camera will be much faster this time around. You can also see that the phone's bezels will be extremely thin. 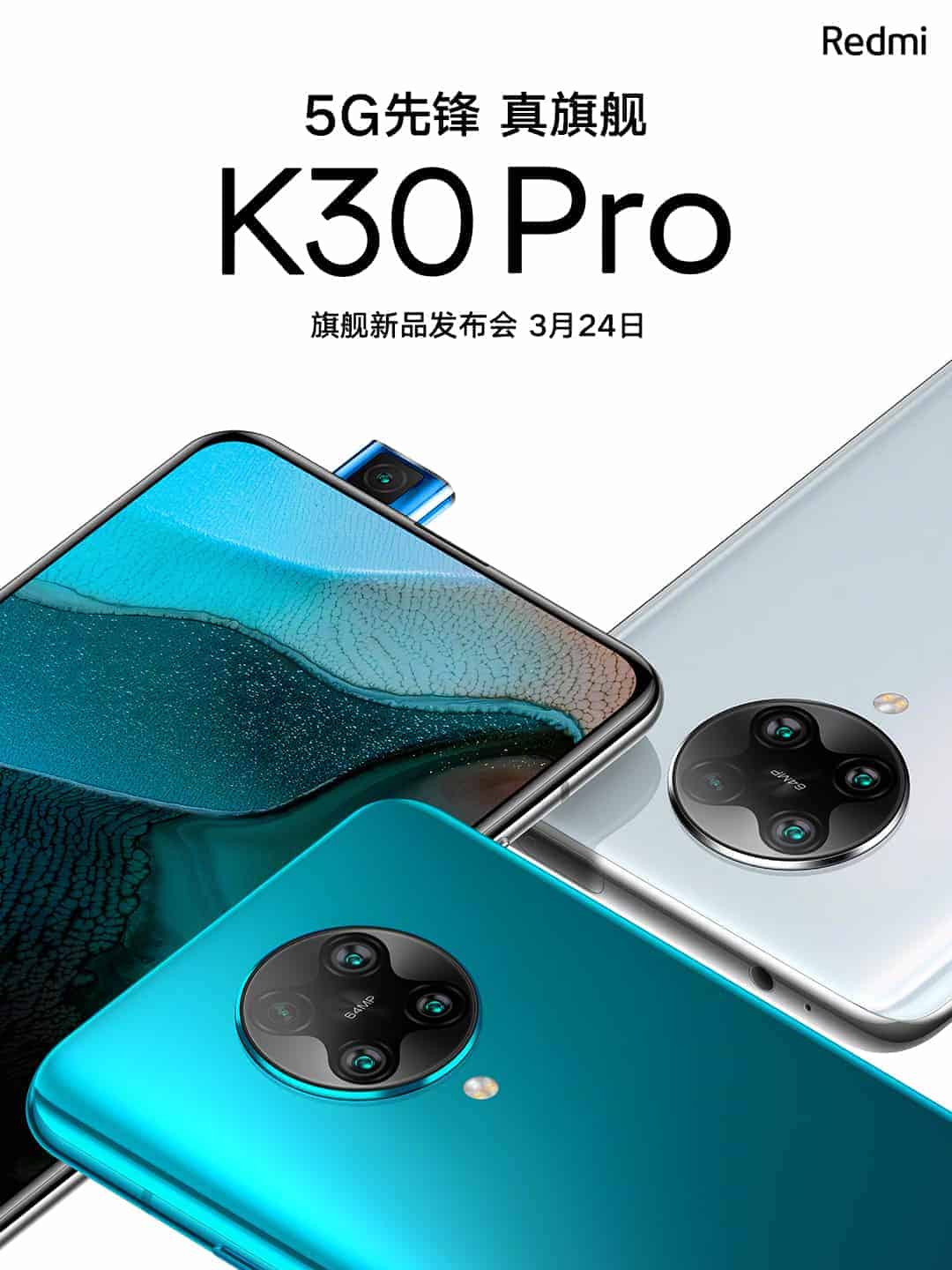 You can clearly see that the phone will include a flat display, and that its camera module will protrude on the back. An LED flash is also visible in this image, and so is the 3.5mm headphone jack at the top.

The company has also confirmed that the phone will offer Game Turbo 3.0. Those are various performance optimizations, mostly focused on gaming. They boost performance, sound, and so on. 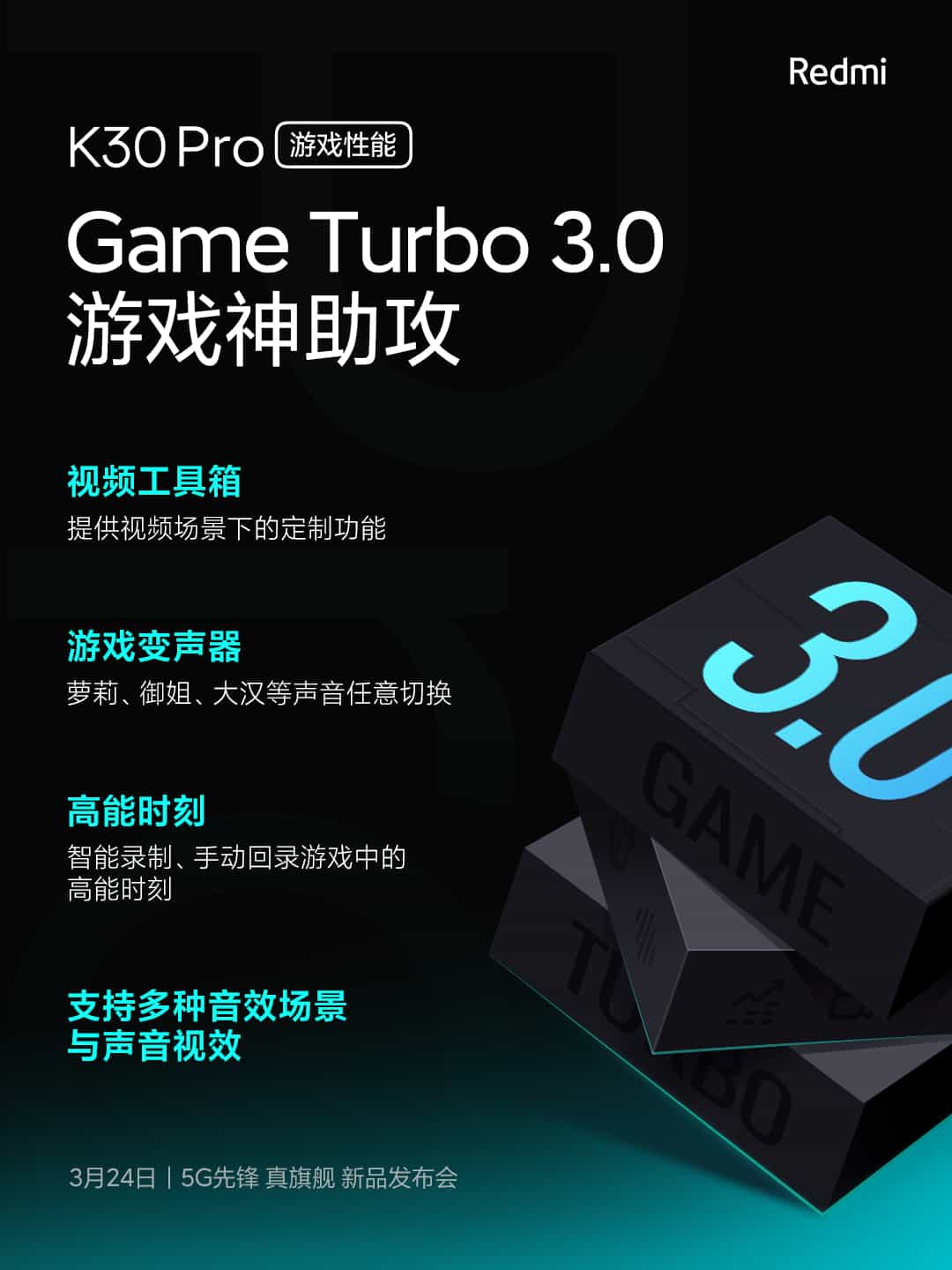 The device will also offer 4D Immersive Tactile Feedback, which should come really useful, not only during typing, but also during gaming sessions as well. It should be way more immersive than regular haptic feedback. 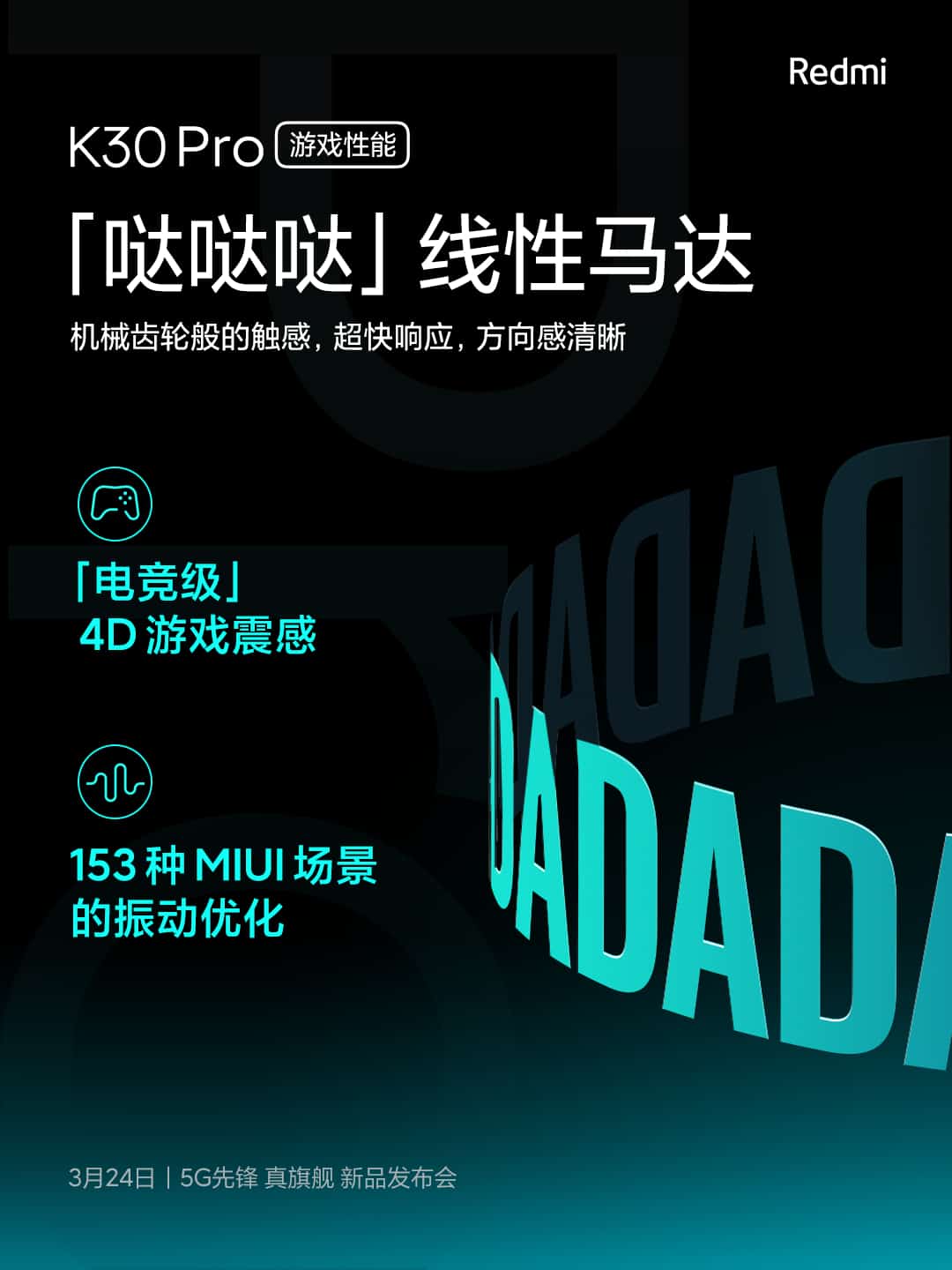 That is pretty much all the information that Redmi shared thus far. There's plenty of info here, though, and we have a pretty good idea as to what to expect. The phone will become official on March 24.