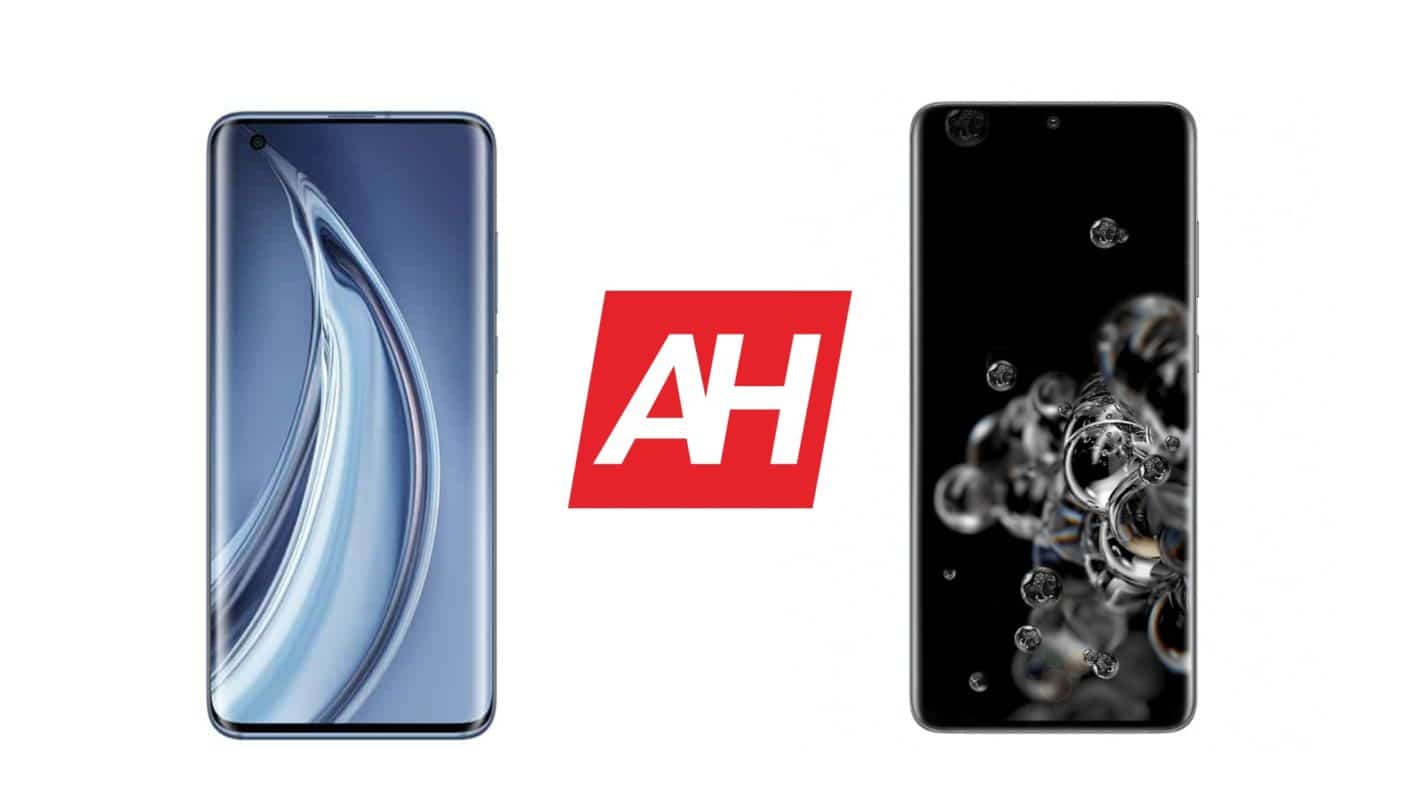 It's time to compare the best of Xiaomi and Samsung, the Xiaomi Mi 10 Pro vs Samsung Galaxy S20 Ultra. These two smartphones are brand new, well, they were at the time of writing this comparison. Both phones come with the latest and greatest technology their respective companies have to offer. That goes for both hardware and software.

That being said, these two phones do not really have a lot in common, even though there are some similarities. We are going to compare the two phones across a number of categories. The first step is comparing their specifications, and then moving to the design comparison, display, performance, battery, and so on. That's pretty much it as far as the intro is concerned, let's kick off the Xiaomi Mi 10 Pro vs Samsung Galaxy S20 Ultra comparison, shall we.

Camera modules are placed in the same spot, in the top-left corner on the back. Those modules are considerably different, though. The Mi 10 Pro's is a lot smaller, and cameras are vertically-aligned. The Galaxy S20 Ultra offers a huge camera module, while cameras are aligned both vertically and horizontally, depending on the shooter. Both phones look quite sleek, and we can't really make up our mind. The rear camera module looks far better on the Mi 10 Pro, but that display camera hole looks better on the Galaxy S20 Ultra due to its position, mostly. The Galaxy S20 Ultra is extremely heavy, but it uses stainless steel, which is a plus. We'll go with a tie here, both are really well-built, sleek-looking phones.

Both of these phones offer AMOLED displays, and both are high refresh rate displays. They are quite different in comparison, though. The Xiaomi Mi 10 Pro features a 6.67-inch fullHD+ panel. That display is protected by Gorilla Glass 5, and it's a 90Hz panel. The Galaxy S20 Ultra, on the other hand, sports a 6.9-inch QHD+ display with Gorilla Glass 6. That is a 120Hz panel. Both displays support HDR10+ output, and offer slightly different aspect ratios, the Galaxy S20 Ultra's is a bit taller.

Both of these displays are extremely responsive, and they look great. Blacks are deep, contrast is excellent, and the colors are punchy. It is also worth noting that you're limited to fullHD+ resolution the Galaxy S20 Ultra if you want to use 120Hz refresh rate. At least that was the case at the time of writing this article, as Samsung is working on changing that. The Xiaomi Mi 10 Pro is limited to fullHD+ either way.

Is the difference in refresh rate noticeable? Well, yes, if you pay attention, but both 90Hz and 120Hz works perfectly, so we wouldn't give it much thought. As long as it's not 60Hz. The Galaxy S20 Ultra's display does look a bit better to us, though. Both are amazing, but S20 Ultra's does seem a bit sharper. That, plus 120Hz refresh rate, and it's a winner of this comparison.

The Xiaomi Mi 10 Pro and Samsung Galaxy S20 Ultra come with extremely powerful hardware. On top of that, software on these two phones is well-optimized. The two phones run Android 10 with MIUI 11 and One UI 2 on top, respectively. Both of those skins are far away from stock Android, but they're both great at the time. The Snapdragon 865 which fuels both phones is excellent, while both devices come with plenty of LPDDR5 RAM and UFS 3.0 flash storage.

Both devices are available in 12GB RAM variants, while the Mi 10 Pro also comes in an 8GB RAM model. The Galaxy S20 Ultra's most expensive variant offer 16GB of RAM. Now, in terms of sheer performance, these two phones are excellent. They're both buttery smooth, no matter what you do. Those high refresh rate displays are only helping the phones shine, to be quite honest. No matter whether you're running the latest game, consuming multimedia content, or simply switching between apps and browsing, these two phones got you. They're extremely fast in every situation.

These two devices both perform so well, that we can't opt for one here. This is a tie, as there's no point in nitpicking in this case. If you want great performance, these two phones are amongst the best out there at the moment.

If you're worried about battery life, well, don't be. The Xiaomi Mi 10 Pro and Galaxy S20 Ultra both include fairly large battery packs. Those battery packs are plenty enough for the two phones to run for quite a while before needing a recharge. Do note that your mileage may be different than ours, of course. We've seen that people get all kinds of weird battery results on the Galaxy S20 Ultra, and it all depends if you're using a high refresh rate option or not.

If you're running these two phones at 90Hz and 120Hz, respectively, both on fullHD+ resolution, you'll easily get over 6-7 hours of screen on time. Presuming you're not into gaming all that much, because that may affect battery life quite a bit. If you lower the refresh rate, you may even get an hour or two extra on the Galaxy S20 Ultra. The difference is less noticeable on the MI 10 Pro. Now, you may even get more than 7 hours of screen on time, of course, it all depends on your usage. It's always tricky to predict battery life, as results differ a lot from one user to the next.

Both companies have improved camera quality this year, a lot. Camera setups on these two phones are not that similar, but the results from both phones are pretty great, for the most part. In the daytime, both phones are capable of producing extremely sharp photos. The dynamic range on both is excellent, as are the colors that you'll get in those images. The same can be said for all available sensors, actually. The Galaxy S20 Ultra still has a habit of oversharpening, though, sometimes that's an advantage, sometimes not so much.

The Galaxy S20 Ultra is a bit better in low light. It does have a tendency to bright up the shadows as well, though, but it does a great job of balancing the image overall. If you don't mind your shadows to be bright, and just want a good image in low light in which you'll be able to see everything, the Galaxy S20 Ultra is the better choice. Low light images do tend to look more lifelike on the Mi 10 Pro, though. The Mi 10 Pro does tend to blur up some of those shots, though, and grain tends to creep in from time to time, but not often.

The Xiaomi Mi 10 Pro has a habit of blowing out night lights. It doesn't do it all the time, but depending on the scene, it happens. The Galaxy S20 Ultra, on the other hand, has slight issues with autofocus at the moment. Samsung already released an update in Korea, so that should be fixed soon. The Galaxy S20 Ultra's periscope camera setup also does a great job, by the way… as long as there's enough light in a shot. Both camera setups are excellent, but the Galaxy S20 Ultra wins this comparison.

In terms of audio, both are fairly good. You can find some differences if you nitpick, but the vast majority of people won't notice the difference. Both devices are equipped with stereo speakers. One of those speakers is placed at the bottom, while the other sits above the display. That goes for both smartphones.

Audio through those speakers is really good. Samsung's are tuned by AKG, but you won't notice much difference, as they both get fairly loud. The sound also remains crisp until you max out the volume, at which point you may hear some distortion, but it's minimal. The Galaxy S20 Ultra's speakers do sound a bit better, at least to us.

Neither device offers a 3.5mm headphone jack. You can either utilize a Type-C USB port, or use Bluetooth. In either case, you'll get really good audio out of both phones, though the Galaxy S20 Ultra is a step ahead in that regard. It has better audio overall, that goes for lows, mids, and highs, but not by much. In any case, both phones are great in this regard, though the Galaxy S20 Ultra has a slight advantage.