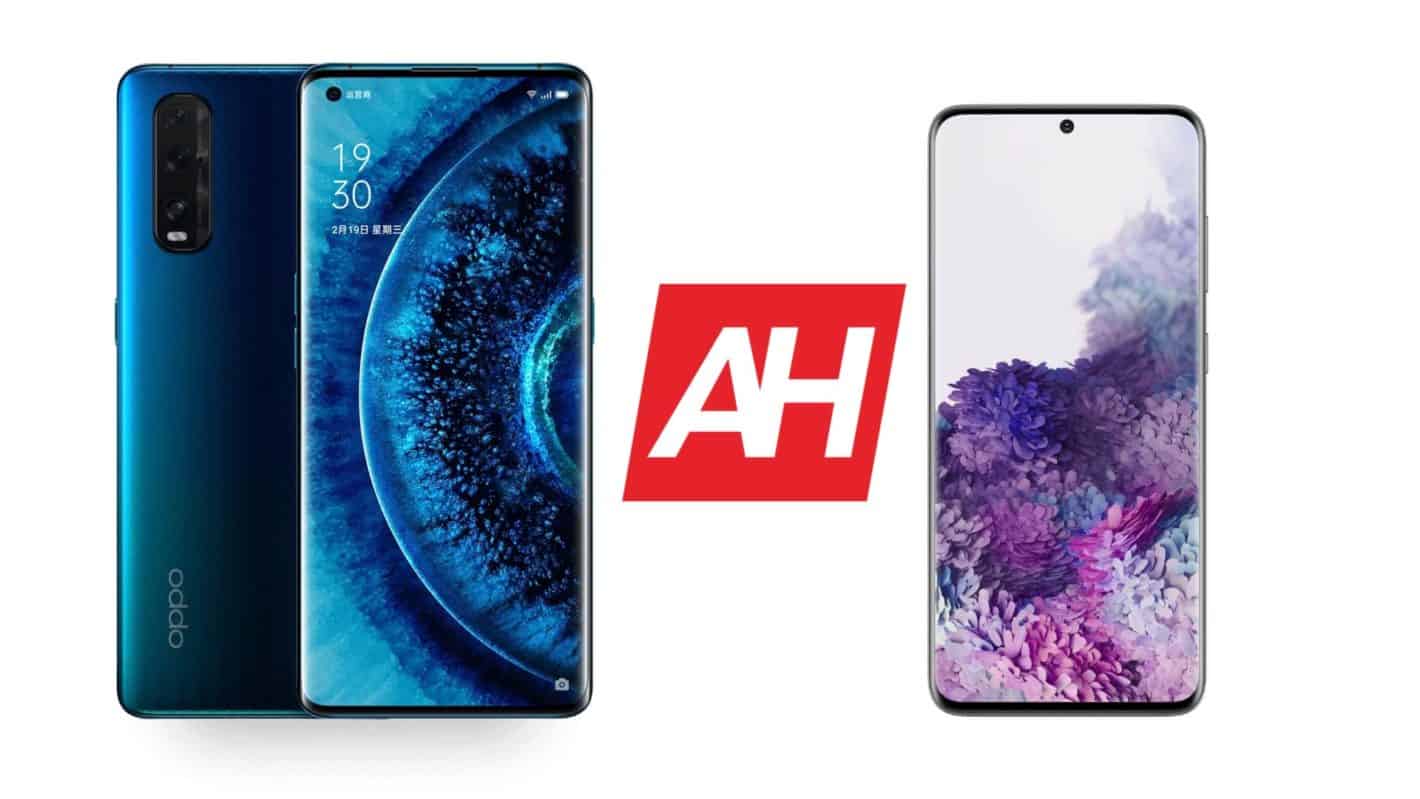 We've already compared the OPPO Find X2 Pro and Samsung Galaxy S20 Ultra, and now it's time to do the same with the Find X2 vs Galaxy S20. These two phones are inferior to their larger siblings, but are also flagship-grade phones. Truth be said, some people would rather get these two, than the more expensive variants, and not just because of their price tags.

The Find X2 and Galaxy S20 are more affordable than their siblings, that is true. Not only that, but they don't exactly have any major deficiencies compared to their siblings, at least that won't be the case for many people. The Galaxy S20 is much lighter than its sibling, while it's also much smaller, while it doesn't really feel inferior. The OPPO Find X2 has a slight camera deficiency compared to its 'Pro' sibling, while they're more or less the same otherwise.

That being said, it will be interesting to see the OPPO Find X2 vs Samsung Galaxy S20 comparison, that's for sure. Both of these phones have a lot to offer. We'll start by listing their specifications, as per usual, and will then move to the design, display, performance, and so on. So, let's get started.

Both the OPPO Find X2 and Samsung Galaxy S20 are made out of metal and glass. They are both extremely slippery, but the Galaxy S20 is much easier to handle in both one and two hands. That phone is considerably smaller, and a lot lighter. The phone weighs 163 grams, compared to the Find X2's 192 / 209 grams (depending on the model). Speaking of which, the OPPO Find X2 comes in both glass and ceramic variants, while the Galaxy S20 is available with a glass back only.

The Galaxy S20 is much shorter, and narrower than the Find X2, but the two phones are almost equally as thick. There is a reason why the OPPO Find X2 is that much bigger, it includes a much larger display. Still, if you're a phone which intends to use your phone with one hand often, the Galaxy S20 is the way to go. The phone is a lot easier to use in one hand than the Find X2, even if you don't put a case on it.

Displays on both of these phones are stellar. These two are amongst the best displays in the market at the moment, that's for sure. The OPPO Find X2 includes a 6.7-inch QHD+ (3168 x 1440) AMOLED display. The Galaxy S20, on the other hand, sports a 6.2-inch QHD+ (3200 x 1440) Dynamic AMOLED display. Both of these displays are curved, and both actually offer high refresh rates.

Both displays support 120Hz refresh rate, and 240Hz touch sensing. On top of that, both panels are protected by a sheet of Gorilla Glass 6. They both get extremely bright, and both support HDR10 output, the Galaxy S20 actually boosts that to HDR10+. The OPPO Find X2's panel can actually show 1.07 billion colors, which is more than the Galaxy S20's produce. That is not something you'll specifically notice, but it is worth noting, as OPPO spent a lot of time on tuning this panel.

So, which one is better? Well, to be quite honest, these are on the same playing field in our book. This is a tie, it's that simple. Both offer amazing, punchy colors, deep blacks, both are extremely sharp, and quite frankly a joy to use. Those high refresh rates are great, though do note that you won't be able to use QHD+ and 120Hz on the Galaxy S20. Samsung is working on enabling that option, but it's not available at the time of writing this article. That is not the case with the OPPO Find X2's panel, however. The good thing is, very few people will notice the difference between a fullHD+ and QHD+ resolutions on the Galaxy S20, that display is that good.

What about the performance? Well, you'll be glad to know that both of these run like butter. Both phones are extremely powerful, that's for sure. The Snapdragon 865 hides inside both of them, though the Exysno 990 is included in the Galaxy S20 in some markets. LPDDR5 RAM is included in both, and the same goes for UFS 3.0 storage. That wouldn't mean much without proper software support, though, now would it. Well, you'll be glad to know that both OPPO and Samsung did a great job with the software here.

Both devices ship with Android 10 out of the box, though their skins are different. The Find X2 includes the ColorOS 7.1 skin, while the Galaxy S20 packs in One UI 2. Those two Android skins are quite different, but both run great, and offer a ton of customization. Thanks to those internals, and high refresh rate displays, elements on the display will glide… like butter, no matter what you do.

These two phones open apps extremely fast, can multitasking at high speeds, even gaming is a breeze. Basically anything you throw at them they can't handle without skipping a beat, that's for sure. That is what you'd expect out of such expensive phones, though, so we're not surprised at all. Performance should not be a deciding factor in this case, as they're both truly great in that regard.

So, what about battery life? Well, the vast majority of people will be happy with what these two phones have to offer. The OPPO Find X2 includes a 4,200mAh battery, while the Galaxy S20 comes with a 4,000mAh unit. Just to get the specs out of the way. The Find X2 does have a considerably larger display, though. In terms of real-life use and battery life, well, they're pretty close.

That will, of course, depend on your usage, but without the gaming factor involved, both of these phones can cross that 6-hour screen-on-time mark. That is the case even if 120Hz refresh rate is on, by the way. Your mileage may vary, quite a bit, in fact. It all depends on your usage, most of you are well-aware of how tricky this category can be. Some people will get amazing battery life, others, not so much.

The Galaxy S20 series, including this model, had its camera-related issues since launch. Samsung had already started pushing out updates to fix the vast majority of those issues, and they're mostly related to autofocus. The Galaxy S20's camera also tends to oversharpen images, but other than that, it's pretty great. You don't have that fancy periscope zoom option here, as on the Galaxy S20 Ultra, but the Find X2 doesn't have it either.

Speaking of which, the OPPO Find X2 is pretty great in the camera department as well. The phone tends to provide less sharp images than the Galaxy S20 in some conditions, but that's only because the Galaxy S20 pushes too far on occasion. Don't get us wrong, the Find X2 camera shots are plenty sharp, as they should be, but not oversharpened… which is a great balance. It actually does a better job with sharpness than the Galaxy S20, at least as things stand at the moment.

Both phones do an amazing job in daylight, and they also do fairly well during the night. They can brighten up images quite a bit, and also retain quite a bit of detail from the shadows. We've actually been impressed with their performance in low light. The OPPO Find X2 does a better job with selfies as well. The Galaxy S20 does have a better dynamic range, though, in most situations… and a better ultrawide shooter. All in all, they're pretty balanced here as well.

The Find X2 and Galaxy S20 both include stereo speakers. In fact, both the main and secondary speakers are placed in pretty much the same spot on both devices. The main one is at the bottom, while the secondary one sits above the display. Speakers on both phones are excellent. They get plenty loud, without noticeable distortion (a little bit on 100-percent volume), and they're quite sharp as well.

For headphones, you can utilize either a Type-C port or Bluetooth, as neither of the two phones offer a 3.5mm headphone jack. The good news is, audio through a good pair of headphones is great. Lows, mids, and highs are well balanced, which is a good thing. You'll never feel like you're lacking bass, or anything of the sort. We cannot really choose a winner here either, as they're on par.

That brings us to the end of the OPPO Find X2 vs Samsung Galaxy S20 comparison. I believe this is the first comparison in this format that tied in every single category. Both of these phones are extremely compelling, and OPPO and Samsung did an amazing job with them. To make things even more interesting, they're available at a similar price tag. The Galaxy S20 costs $999, while the Find X2 is not yet available, but it will cost around €999 (depending on the region). If you want a larger phone, get the Find X2, if you want a smaller one, get the Galaxy S20. There are other things you should consider, of course, but this is the main factor in our book, as they're both great, and on par, in every other way.