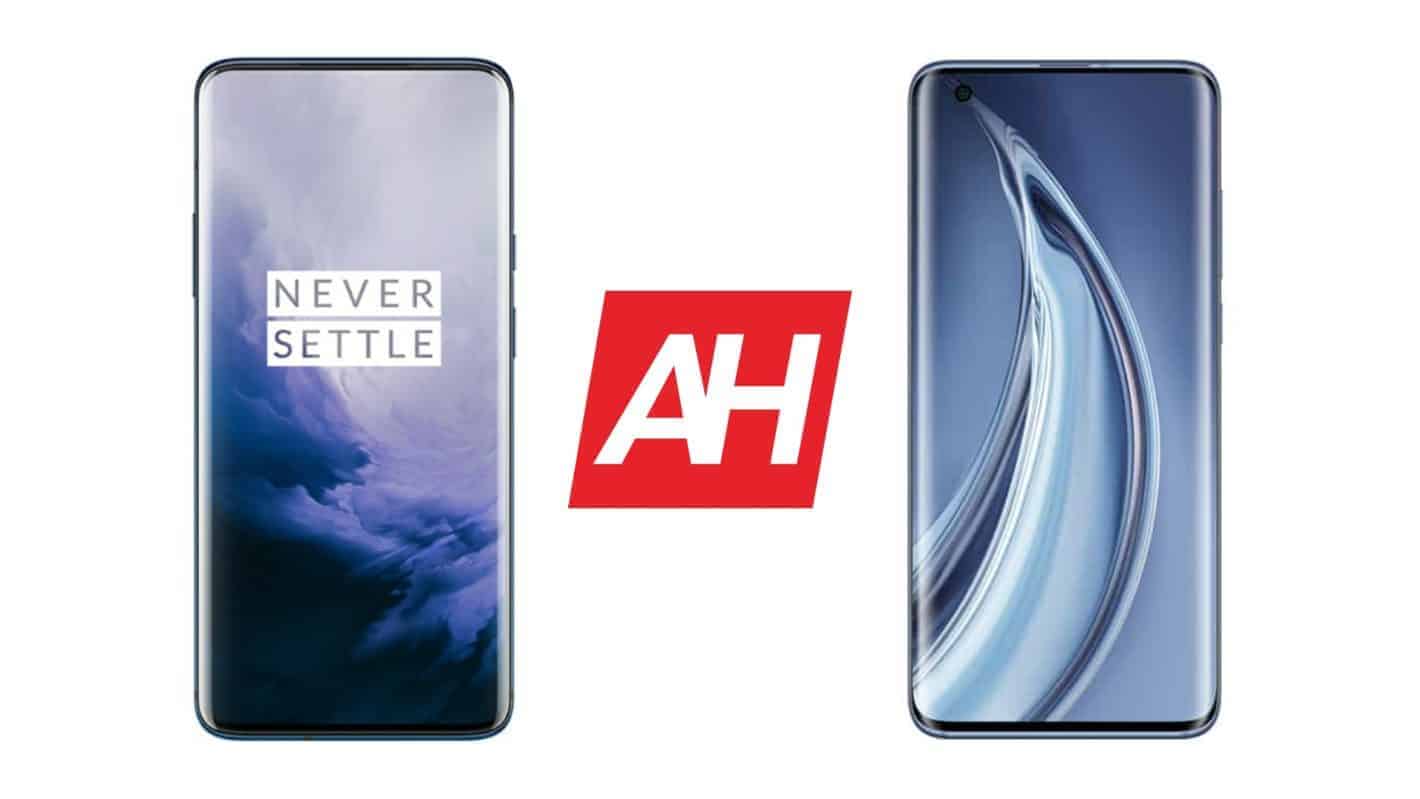 The time has come to compare two heavyweight Chinese flagships, the OnePlus 7T Pro vs Xiaomi Mi 10 Pro. These two smartphones are quite powerful, even though the Mi 10 Pro is technically a generation newer. Each of them has its positives and negatives, of course, and we're here to talk about them.

We will compare these two smartphones across a number of categories. First, we'll list their specifications, and then move to comparing their design, display, performance, battery life, and so on. That's about it, it's time to get started, let's compare the OnePlus 7T Pro vs Xiaomi Mi 10 Pro, shall we?

These two smartphones have a somewhat similar in-hand feel. They're both made out of metal and glass, and their dimensions are quite similar. They're exactly the same height, while the OnePlus 7T Pro is just a little bit wider, and thinner. They are both extremely slippery, mainly due to their build materials. Both of them have a curved back as well, by the way, and a curved display.

Bezels on both phones are extremely thin, almost non-existent. A display camera hole is present on the Xiaomi Mi 10 Pro, while the OnePlus 7T Pro utilizes a pop-up selfie camera. The OnePlus 7T Pro includes three vertically-aligned cameras, which are centered on the back. The Xiaomi Mi 10 Pro, on the other hand, sports four vertically-aligned cameras, which are placed in the top-left corner of its back.

These two phones are even similar in terms of weight. The Xiaomi Mi 10 Pro is only 2 grams heavier, which is negligible. Both phones are quite hefty, though, at over 200 grams. Both of these smartphones look really nice, and sleek. Truth be said, they're extremely similar, and this would be a draw if not for that display camera hole on the Mi 10 Pro. The OnePlus 7T Pro definitely looks better as it doesn't have such a hole in the display, so we'll give this round to OnePlus' handset. If you're skeptical about pop-up cameras, though, the Mi 10 Pro should be your pick.

These two phones have displays of the same size. Both phones include 6.67-inch OLED panels, but these two displays are not exactly the same. The OnePlus 7T Pro comes with a QHD+ Fluid AMOLED display, while the Xiaomi Mi 10 Pro includes a fullHD+ Super AMOLED panel. Both of those displays are protected by a sheet of Gorilla Glass 5, by the way, and both are curved.

Both panels can project HDR10+ content, and both can run at a 90Hz refresh rate. To make them even more alike, it's worth noting that both offer a 19.5:9 aspect ratio. So, is the higher resolution on the OnePlus 7T Pro that noticeable? Well, no, it is not. You can see the difference if you really try to, but that's not a big deal at all. Both of these panels are really, really good, though there are some differences.

The OnePlus 7T Pro's panel looks a bit more vivid, and not just because of the default setting, though you can tweak that on both phones. The difference is small, but it's there. Both displays offer true blacks, as OLED displays should, and both are extremely sharp. Truth be said, these differences won't mean much for the vast majority of people. Those of you who want to nitpick should get the OnePlus 7T Pro, as far as the display is concerned.

The Xiaomi Mi 10 Pro does come with a more powerful processor, and faster RAM, but that doesn't mean much in the performance department. Both of these phones are blazingly fast. They will rip through anything you throw at them, that much is certain. They're great for gaming, browsing, media consumption, well, pretty much anything you can do with your phone.

Both phones come with really well-optimized software to back those powerful internals. If we had to nitpick, we'd say that the Mi 10 Pro may be a fraction of a second faster when it comes to opening up apps and games, but the vast majority of people won't even notice the difference. OnePlus did a great job when it comes to OxygenOS optimization, and both phones run Android 10.

The Xiaomi Mi 10 Pro has a considerably larger battery than the OnePlus 7T Pro. As most of you know, that doesn't need to mean much in terms of battery life, and that's just the case here. Both of these phones can get over 7 hours of screen-on-time, but it all depends on how you use them. I personally don't game much during my regular day, on most days not at all, but I still manage to get phones over 6-7 hours of screen on time on a daily basis.

These two can handle media consumption, watching movies / TV shows, browsing the web, and so on, and still get over the 7-hour mark even with a 90Hz refresh rate. The Xiaomi Mi 10 Pro offered slightly better battery life, but its battery is newer, and larger, plus the display resolution is lower. So take that into account. All in all, they both offer great battery life, so you won't be disappointed in that regard.

Both OnePlus and Xiaomi have improved camera quality on their flagships quite a bit. Both of these phones are quite compelling in this regard, in pretty much all scenarios. I wouldn't say they're the best around, not at all, but they're really, really good. In daylight conditions, they both shoot extremely sharp, well-balanced images, with plenty of detail. The dynamic range is also great, so nothing to worry about here.

Ultrawide angle cameras can also provide really good images in these conditions, though a bit softer than main sensors, of course. When the light goes away, they can both light up a scene really well. The Xiaomi Mi 10 Pro has issues with street lights, sometimes, while the OnePlus 7T Pro is a bit weaker when it comes to details in such lighting conditions. So, each of them has its own positives and negatives, but they're both really good.

We prefer selfies from the Xiaomi Mi 10 Pro, if that's something you're interested in, as long as you don't mind looking a tad bit unrealistic. If you prefer more realistic selfies, the OnePlus 7T Pro is a better choice. When it comes to cameras, these two phones are on the same playing field.

The OnePlus 7T Pro and Xiaomi Mi 10 Pro are quite similar when it comes to audio. They both include stereo speakers, which are similarly-placed. Those speakers also provide similar sound, for the most part. Both can get really loud, and keep a good balance. Even when you tune them all the way up, you'll hear only minimal distortion on some tracks, and most of you won't even notice it.

Neither of the two phones has a 3.5mm headphone jack. You can utilize the Type-C port, or Bluetooth, it's up to you. No matter which one you choose, you'll get a similar sound, despite the fact the Mi 10 Pro offers a newer Bluetooth chip. Both highs and mids are great, lows are really good, but not as impressive. As long as you have a good pair of headphones, both of these phones will do the trick.

That brings us to the end of the OnePlus 7T Pro vs Xiaomi Mi 10 Pro comparison. You'll notice that each of these two phones won in two categories. The remaining two categories ended up in a tie. That basically means that there is no winner here, as these two devices really are on the same playing field, despite the fact the Mi 10 Pro is a bit newer. No matter which phone you opt for, chances are you won't make a mistake. These two will even be priced similarly once the Mi 10 Pro's global variant becomes available, at least that's what we're expecting.