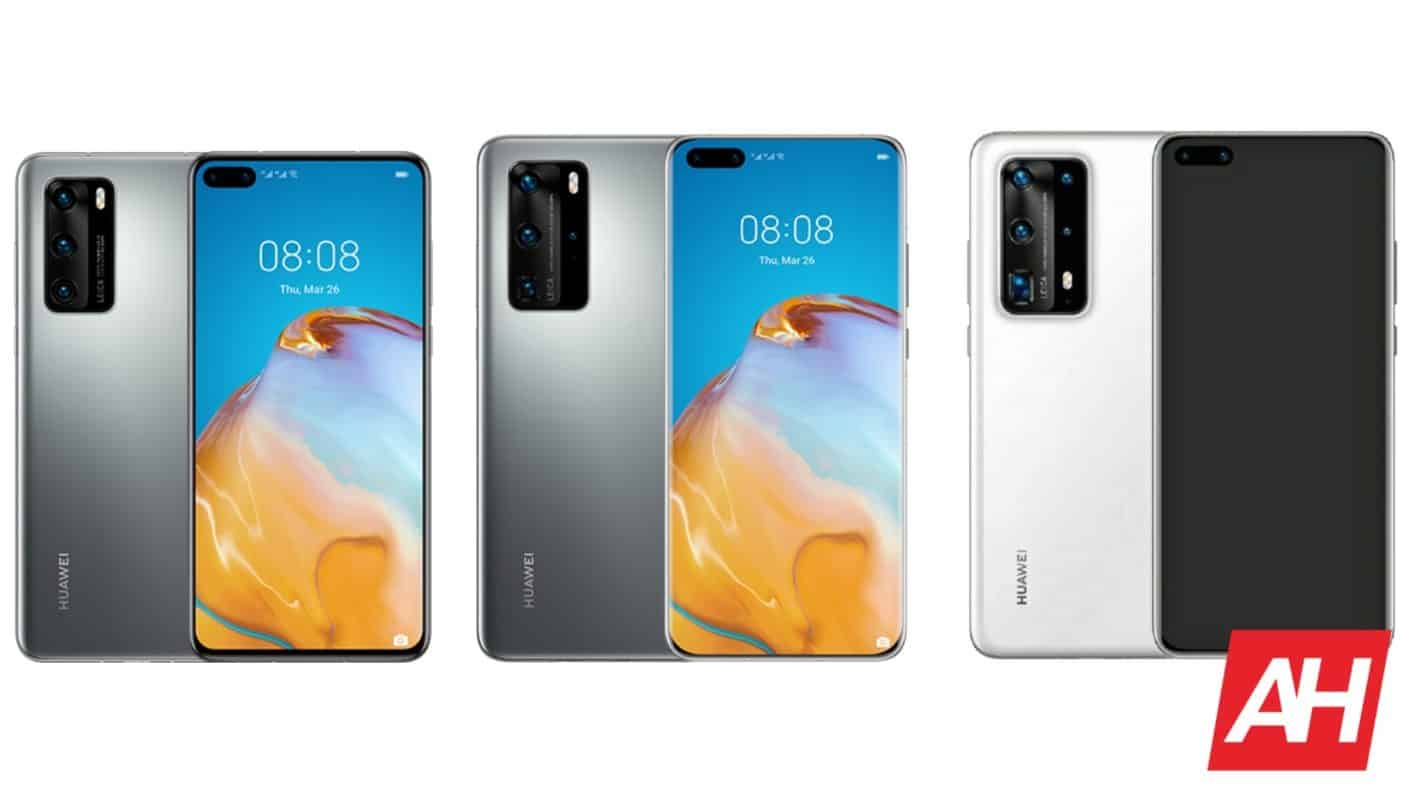 We're here to compare Huawei's new flagship smartphones, the Huawei P40 vs P40 Pro vs P40 Pro+. All three of these phones were announced at the same time, and even though there are quite a few similarities between them, they're not identical, not at all. All three phones are fueled by the same processor, and in many ways, they're equally powerful.

There are some differences between them. The Huawei P40 is the smallest, and cheapest, while it's the only one that has a flat display. The P40 Pro+ is the only one to use ceramic in its build, and it has the most cameras, and so on. As per usual, we'll compare these smartphones across a number of categories.

We'll start by listing their specifications, and then go ahead to compare their design, displays, performance, and so on. Do note that this is not a review by any means. We're just comparing the phones based on our initial impressions, so information such as battery life will be limited, and the goes for detailed camera information. That being said, let's compare the Huawei P40 vs P40 Pro vs P40 Pro+.

The P40 and P40 Pro are made out of metal and glass, while the P40 Pro+ model combines metal with ceramic. All three phones have a pill-shaped display camera hole, though it's different in size on all three phones. It is in the same place on these devices, though, in the top-left corner of the display.

The P40 is the only phone that has a flat display, while the other two come with curved panels. The back side on all three phones is curved, and quite frankly, slippery. That's exactly what you'd expect out of glass and ceramic, though, there's only so much OEMs can do about it.

The P40 is the smallest smartphone in the series

The Huawei P40 Pro and P40 Pro+ look more or less the same. Other than a slight difference in the shape of the display hole on the front, and the looks of the rear camera module. The P40 is easily recognizable however, as it stands out the most due to its flat display, and smaller camera module.

We can't really select a winner here, as these three phones are quite similar, and it's all a matter of preference. If you really like flat displays, and smaller devices, the P40 is for you. If you prefer larger, curved displays, take your pick from the other two phones. They look really similar in all other ways.

So, we have three phones here, though the two 'Pro' models have the same display. The Huawei P40 has the smallest one, a 6.1-inch panel. It's also the only handset that has a flat display. This is a fullHD+ OLED display with 60Hz refresh rate. The Huawei P40 Pro and P40 Pro+ have a larger, 6.58-inch fullHD+ OLED display with 90Hz refresh rate. This display is curved, unlike the P40's panel. It's not only curved, but it's curved on four sides aka 'quad curved'.

All three displays look really good, but thanks to that 90Hz refresh rate, the P40 Pro's and P40 Pro+'s displays are much more enjoyable to use. Many people say that they don't care about refresh rate, but once you start using a high refresh rate display, it's difficult going back. The difference between 60Hz and 90Hz is quite noticeable. Content on the display moves much smoother with high refresh rate.

Colors are great on all three panels, they're quite punchy. Those OLED pure blacks are also a part of the offering, of course. Viewing angles on these three displays are great as well, and they get plenty bright on top of that. To be quite honest, for the vast majority of people, all three displays will be more than good enough. If you're one of those people who do pay attention to refresh rate, and do notice the difference in the smoothness of content, then you should aim towards either the P40 Pro or P40 Pro+.

As far as performance goes, there really isn't any difference between these three phones. All three of them are pretty much equally fast when it comes to everything. The Huawei P40 has the least strain on its processor as it is running a 60Hz display, but you won't see the difference in performance between it and the P40 Pro / P40 Pro+ at all.

All four of these phones can handle anything you throw at them. They open apps extremely fast, and the same goes for multitasking. Consuming multimedia is also a breeze, and you can also run the newest and most demanding games without a problem. 8GB of RAM on all three devices is plenty enough for everything, too much even.

So, the bottom line is, the Kirin 990 is a great processor. It is still one of the best around, and these three devices will offer great performance no matter what. Don't choose one of them based on performance, take into account other factors, as they perform the same, pretty much.

So, what about battery life? Well, we cannot really make battery life predictions, as we did not spend enough time with the devices. What we can say, however, is that the 4,200mAh battery inside of the P40 Pro+ could have been larger. The 3,800mAh and 4,200mAh packs for the P40 and P40 Pro, respectively, seem plenty.

It is worth noting that Huawei's flagships are constantly amongst the best smartphone on the market when it comes to battery life. Huawei's EMUI puts far more restrictions on apps in the background than other skins. You do have control over that, however, as battery settings in EMUI 10.1 are quite detailed.

The Huawei P40 Pro and P40 Pro+ have an advantage in terms of telephoto photography. Both of those phones include a periscope camera setup which is quite capable. The P40 Pro+ even includes a secondary telephoto camera for closer distances with better optical zoom. The P40 Pro and P40 Pro+ also have an advantage when it comes to ultrawide shots. Both of those phones include a 40-megapixel camera with that purpose, the main sensor from Huawei's last-gen phones, with an ultrawide lens.

All three phones are great for low light photography

All of these phones provide great-looking ultrawide shots, even when the light goes away. The main camera on all three phones has an RYYB setup and uses 4-in-1 pixel binning. Huawei pushed its photography to the next level here, and daylight and low-light shots on all three phones look great. Noise is minimal in low light conditions, while the dynamic range and white balance is spot on in general. Photos also end up looking quite sharp across the board, which is something to be expected.

Leica's lenses are once again a part of the offering, by the way. Do note that the periscope camera system is still not great in low light conditions, but it's better than it was. It can be quite useful during the day, however. This is Huawei's second-gen periscope camera, so they've learned from their mistakes, and improved it across the board. The Huawei P40 Pro+ does have the most compelling camera system, as it offers more versatility by including that extra telephoto camera. All three phones are great in this regard, though.

First and foremost, do note that neither of these phones offer a 3.5mm headphone jack. That being said, all three of them do offer stereo speakers. Huawei did not really spend too much time on the audio section when talking about these phones. Audio that they can provide is really good, and on par with other flagship phones, but it's not earth-shattering. Also, it seems like all three phones are identical in this regard.

Their speakers do get plenty loud, and the distortion is barely noticeable at high volumes. That is actually a trend when it comes to flagship devices lately. Audio through headphones is not really good, but not the best we've heard. We would like to see better mids, though overall, it's really good. As already mentioned, audio in general is in line with the most flagship smartphones these days.

This brings us to the end of our Huawei P40 vs P40 Pro vs P40 Pro+ comparison. All in all, it's safe to say that the P40 Pro and P40 Pro+ are the winners here. The P40 Pro+ does technically offer more in the camera department (though the difference is almost not worth noting), while the P40 Pro will offer better battery life. The P40 is inferior to both phones in several ways, that includes mainly the display and camera departments. Despite that, though, it's a great phone, and will probably be amongst the best compact flagships of 2020.