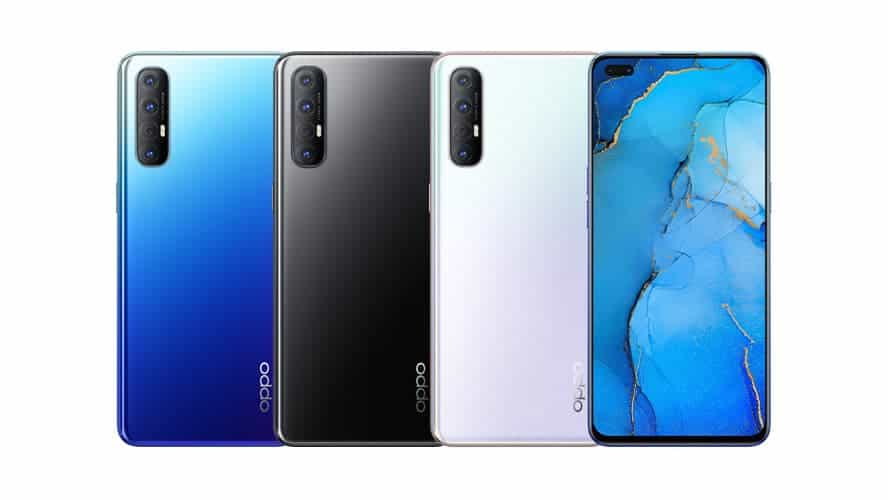 OPPO has just announced a new smartphone, the Reno3 Pro. This is the company's brand new mid-range smartphone, and it got announced in India, but it's coming to a number of other markets. More on that later.

The OPPO Reno3 Pro is a part of the company's 'Reno' series of smartphones, and it's different than the Chinese variant. Some of you may know that OPPO introduced the Reno3 series in China at the end of last year.

This is the global variant of the OPPO Reno3 Pro

Well, the OPPO Reno3 Pro is the global variant, and thus the variant that you should pay attention to if you're not living in China. This phone is made out of metal and glass, and comes with an in-display fingerprint scanner.

The phone features four cameras on the back, and those cameras are vertically-aligned. All four cameras are a part of the same camera module which is placed in the top-left corner of the phone's back.

The back side of the device is curved, and OPPO's logo lies there as well. The Reno3 Pro includes really thin bezels, while its bottom bezel is the thickest. The device includes a pill-shaped camera hole on the front. That camera hole is placed in the top-left corner of the device, and includes two camera sensors.

The phone is fueled by the Helio P95 64-bit octa-core processor by MediaTek. This is a 12nm processor, which includes the IMG PowerVR GM 9446 GPU.

The device also packs in 8GB of LPDDR4X RAM, and 128GB / 256GB of expandable storage. There are also two SIM card slots included in the phone, and you can use the second one to expand the phone's storage (hybrid setup).

A 4,025mAh battery is a part of the offering as well, and it supports 30W VOOC Flash Charge 4.0. The device includes a 3.5mm headphone jack, and it has Dolby Atmos support as well.

Android 10 comes pre-installed on the device, along with OPPO's ColorOS 7 skin. OPPO has included 64, 8, 13, and 2-megapixel cameras on the back of this phone. 44 and 2-megapixel units are placed on the front.

The device includes four cameras on the back, and two on the front

The phone has been announced in Auroral Blue, Midnight Black, and Sky White color variants. Its pricing starts at Rs. 29,990 ($412) in India, and it will go on sale from March 6. OPPO said that the phone will arrive to countries in Southeast Asia, South Asia, Middle East, North Africa, and East Europe soon.