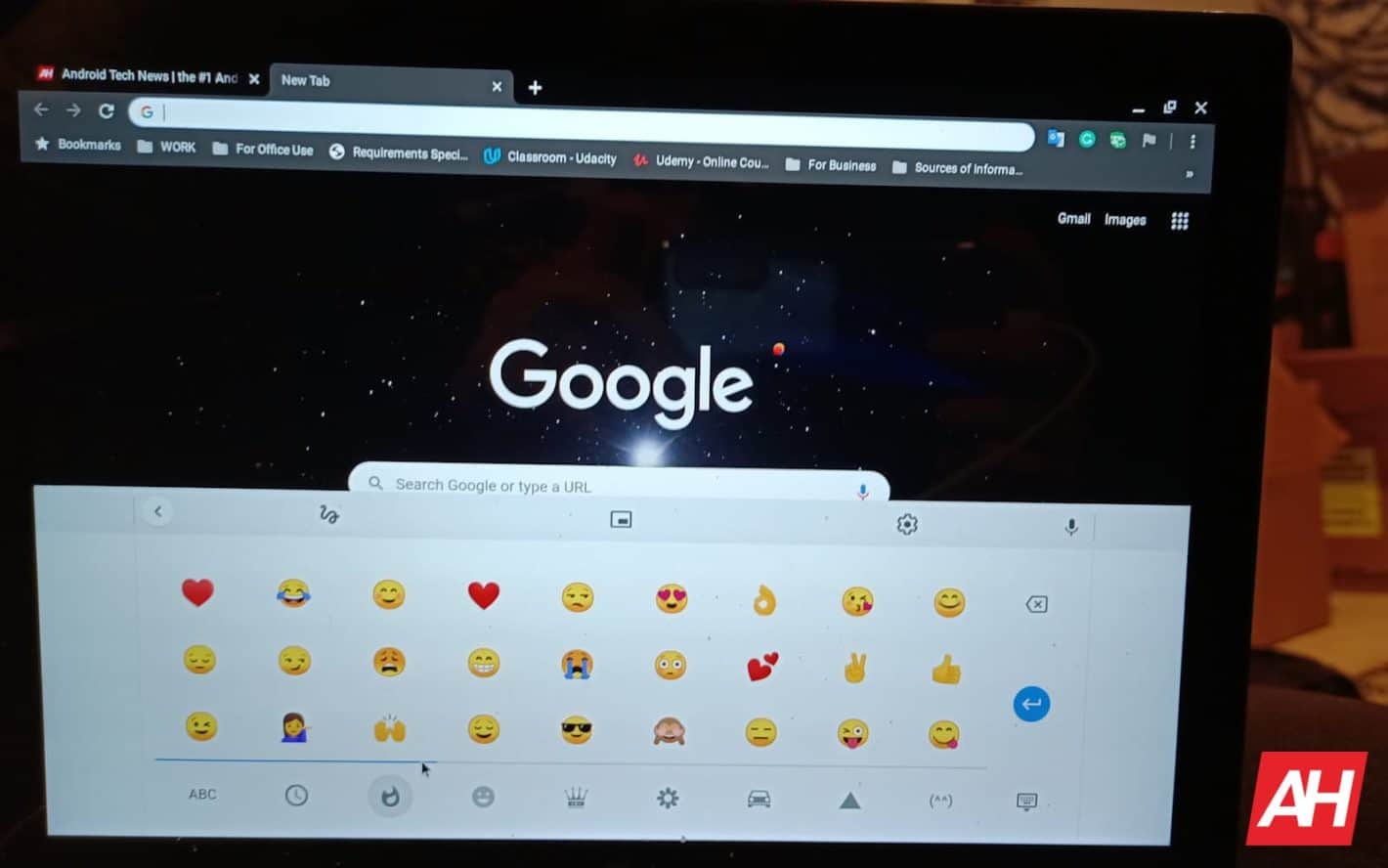 Emoji are available to use pretty much everywhere, including in Chrome or on a Chromebook. And that's hardly surprising. The expressive little characters have become an instrumental part of communication over the past several years. They can portray a range of emotions or ideas in a single instance or be strung together to create more complex thoughts. Their spread is also attributable to the fact that they're usable in just about every kind of conversation.

For mobile platforms, there are plenty of emoji apps to help users find what they want to say. Not all of those contain the same emoji and style has become an important aspect of the figures anyway. Apps allow more personally-relatable varieties to be discovered.

That's a concept that's also been hit on by various communications apps such as Facebook and Telegram, giving rise to the use of 'stickers'.

On a computer, however, users are left with fewer options. That's particularly true when it comes to fast options that can be utilized without navigating external sites or software. Chrome users don't face the same problem. That's alleviated by a simple menu adjustment that Google started touting back in July of last year. Namely, the company has added a single click method for accessing emoji.

The feature is accessible anywhere text can be entered, making it more useful as a system-level utility than it might be as a standalone app. That's not necessarily going to make it easy for every user to find on their own. So Android Headlines created the following guide to step you through the process, whether using Windows, Mac, Linux, or Chrome OS.

Using emoji in Chrome is a straightforward affair but that doesn't mean it's easy to figure out without some guidance. The first step here is to right-click on any text field users want to insert an emoji into. The top option presented there will read "Emoji."

Users can either scroll down to that via the keyboard or, more easily, tap or click on the option. Chrome will then call forward a categorized, tabbed card showing available emoji in a scrollable interface. The UI closely resembles that found on Android, but with the category icons laid out at the bottom. Clicking any of those categories will, of course, switch the UI to show emoji in the respective category.

Of course, emoji can also be searched in desktop Chrome via the text-entry bar. In our example, that's the URL Omnibox residing just above the emoji UI. That means users can easily find a specific emotion or other emoji simply by typing in a few letters. Users can type those letters directly into the text field that's been selected. Tapping or clicking an emoji will enter that into that same selected text field.

The chief caveat to the use of emoji in Chrome using this method on desktop platforms is that the emoji may be somewhat unfamiliar. They do closely resemble the same emoji users should be accustomed to seeing on their iOS or Android smartphone. In fact, all of the same emoji should be available and searching them should work identically. But they also have a more traditional, bit-art style than modern emoji that will differ quite a bit from the emoji found on mobile devices or Chrome OS.

Conversely, users do have access to a full battery of symbols that can be used on this platform. On Chromebooks, those are dispersed throughout various places on the keyboard, as we'll discuss momentarily.

The use of emoji in Chrome OS or on a Chromebook works quite differently than other desktop platforms. The starting steps to accomplish the task are, of course, the same. Users can, of course, start by right-clicking in any text field. The easiest way to right-click is going to either be to click the touchpad with two fingers or to hold the "alt" key and then clicking.

Then, users will need to click the Chromebook the same option found in other platforms. Namely, that the "Emoji" option.

On Chromebooks, however, users won't be presented with a list of emojis near the text field. The emoji will still be organized by category. But they'll be presented via Chrome OS's virtual on-screen keyboard.

That comes with at least a couple of benefits. Namely, the emoji shown are larger. That means it's easier to discern exactly what each emoji is portraying. So users will be better able to tell the difference between, for example, varying blushing or surprised faces in the list.

It also means that the emoji are accessible simply by using the on-screen keyboard. As with Android, the characters are tucked away behind a smiling emoji icon when that's loaded up. So users who are accessing their Chromebook in tablet mode are going to have an easier time using emoji, to begin with. That'll be the case regardless of whether the keyboard is used on a 2-in-1 or a dedicated Chrome OS tablet.

When put in tablet mode, Chromebooks automatically call forward the virtual keyboard when a text field is selected. For other devices, turning on the keyboard is as simple as following the steps above or by navigating to the Settings app in the Quick Settings behind the clock panel on the dock. Or users can get there by opening the Settings app in the launcher.

Then, users need to search for "accessibility," click the "Manage accessibility features" card, and then scroll down to "Keyboard and text input."

From there, users need to flip the toggle labeled "Enable on-screen keyboard." Then, a keyboard icon will show on the dock near the clock. Specifically, that's to the left-hand side of that dock segment. Clicking or tapping a text field, or conversely on that keyboard icon, will bring forward the virtual keyboard.

The primary caveat to the onscreen keyboard is, first, that turning on the keyboard via settings will call it forward every time a text field is selected. That could easily get in the way for some users. But emoji are also not searchable on a Chromebook or in Chrome OS.

Finally, users will have to look for symbols on the virtual keyboard in precisely the same way they would on Android. That means there will be more clicks to find them and that not every symbol available on other platforms is available here.