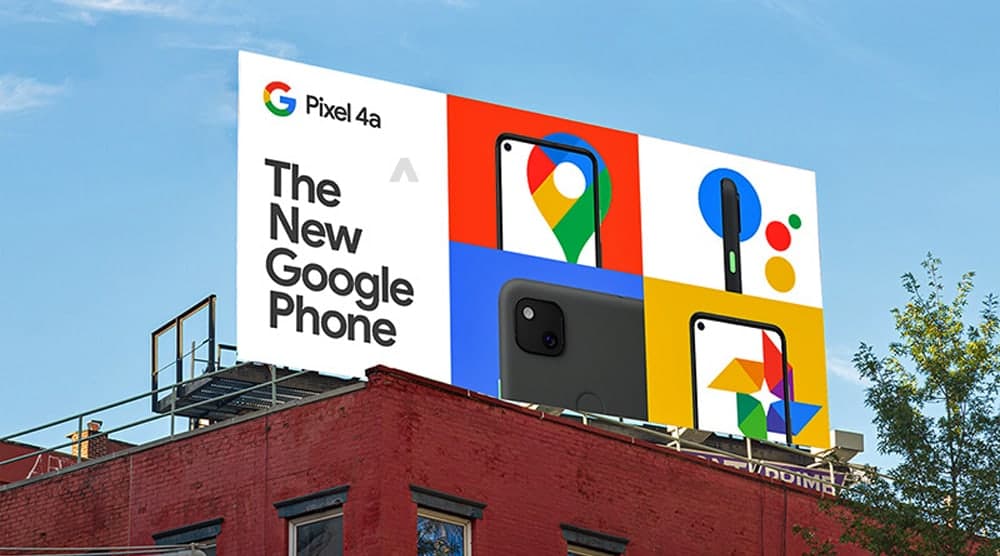 The Google Pixel 4a has been leaking like crazy recently, and the phone's design and pricing have just been confirmed by Evan Blass. The tipster shared three images via Twitter, showing the phone's billboards.

Mr. Blass added the following caption: "Pays to keep your eyes open on a walk". So, as you can see, these billboards were spotted out and about… well, a billboard. That may sound confusing, but we seem to be looking at one dynamic billboard here.

You'll notice that the same place is pictured in all three images, and yet the content of the billboard is different. All three billboards mention the phone's name, Google Pixel 4a, and reveal parts of its design.

These images reveal the Google Pixel 4a design and pricing

In the first image, you'll be able to see that the phone will feature a flat display. Its physical buttons are also shown here. As you can see, all of them will be placed on the left, and the power / lock button will once again be colored.

This image also shows the phone's protruding camera module on the back, and its display camera hole. That camera hole will be placed in the top-left corner of the phone's display.

The second image shows the phone's rear camera module, which contains one camera sensor, and an LED flash. It also shows the rear-facing fingerprint scanner, and the right side of the device.

This time around, however, we're not looking at the white variant of the Pixel 4a, but a black one. The black variant has a light green power button, unlike the white variant's orange button.

The third image shows the whole front of the Pixel 4a. This image confirms that the phone will have somewhat thin bezels. The phone's starting price is also highlighted here.

The phone's pricing will start at $399, same as last year

The Google Pixel 4a pricing will start at $399 in the US. We're expecting Google to offer at least two storage variants of the Pixel 4a, and two of the Pixel 4a XL. The $399 will be the starting price for the smaller model.

Those are some good news, if you're planning to get the Pixel 4a. Why? Well, because it seems like the series will retain the pricing structure of the Pixel 3a. The starting price for the Pixel 3a was also $399 when it arrived last year.

The Google Pixel 4a design was shown in a YouTube video yesterday, along with some additional details. That video confirmed that the phone will be fueled by the Snapdragon 730 SoC, and include 6GB of RAM. The entry-level model will include 64GB of storage.

The phone will feature a fullHD+ display, though we still do not the display size. Google will stick with a 12.2-megapixel camera on the back, and the phone will be made out of polycarbonate (plastic).