The Google Photos app redesign is upon us, reports Android Police. The company has started rolling out a server-side update that will switch things up in the app itself.

This Google Photos redesign moves the search option, and ditches the hamburger menu

Two of the most notable changes include the search bar and hamburger menu, but those are not the only changes. That being said, let’s first talk about that search bar, shall we.

At the moment, You have a rather spacey search bar at the top, within your Google Photos app. Well, that is going away. Google will transform that search bar into a search button, and move it to the bottom.

The search button will become a part of the bottom bar inside the app. It will be the second icon on the bottom, right after the ‘Photos’ option. The ‘For you’, ‘Sharing’, and ‘Library’ icons will remain on the bottom.

Moving the search option may seem like a great idea for some. For others, not so much. Some people prefer the search bar, no matter where it’s located. This new icon on the bottom makes it far easier to access the option with one hand.

It is also worth noting that once you tap on that search option, your keyboard won’t automatically open. You’ll first see a few suggestions thrown your way by Google Photos. These suggestions look much better visually.

The hamburger menu is also going away. This was to be expected, as Google now uses a swipe from left / right as a back action. So swiping from the left to access the hamburger menu doesn’t make all that much sense, it’s conflicting.

The album tab will also disappear after this Google Photos app redesign arrives to your phone. Its content remains, though. It has been moved to the ‘Library’ section, as that’s where most items from the hamburger menu have been moved.

You’ll be able to find the ‘Free up space’ option there, and the same goes for the ‘Manage your library’ option as well. The photo book store may have also been moved there, but we’re not sure yet.

As already mentioned, this update is coming in the form of a server-side update. That means that you won’t get it by simply updating your Google Photos app via the Play Store.

Having the latest version of the app may help, though, and it’s always a good idea. So navigate to the Play Store, and see if everything is up to date. If it is, all you can do is wait for the change to arrive.

It is also worth noting that this is the first major redesign that we’ve seen for Google Photos since 2016. The bottom bar has been added along the way, but other than that, this is the biggest change. 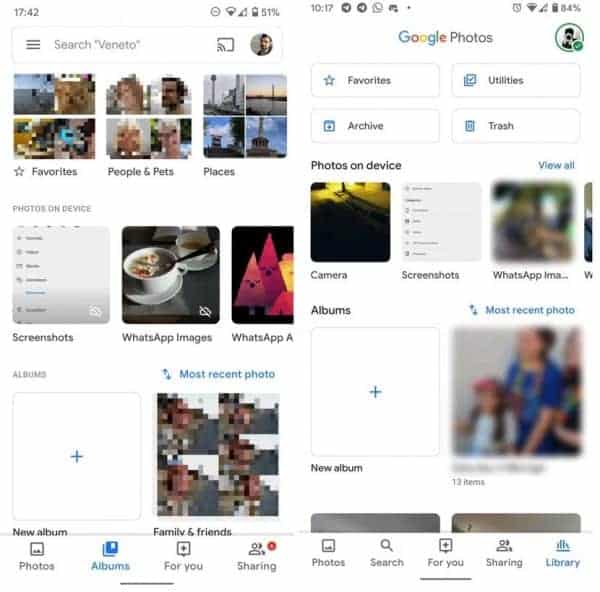