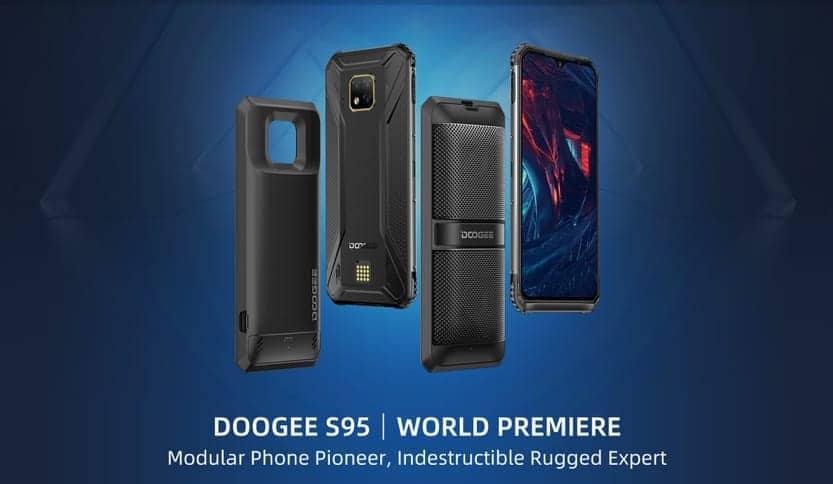 DOOGEE has announced that its S95 modular handset is now available to purchase. The phone is currently available via AliExpress, and the company's official store, DOOGEE Mall.

The phone's pricing starts at $229.99, which is actually a discounted price tag, from $299.99. Chances are that the phone's price tag will go up in the near future.

The DOOGEE S95 is available for purchase, and a discount code is also available

$229.99 is not the lowest price tag you can get this phone for, though. The company is also offering 500 consumers a chance to use an additional discount promo code. That promo code is 'DGS9530OFF'.

This code will shave $30 off the aforementioned price tag, so the most affordable variant will set you back $199.99. You can use this promo code on AliExpress, via the link provided below the article. The price tag on DOOGEE Mall seems to be $229.99 still. DOOGEE does promise some gifts if you buy it via the DOOGEE Mall, though, at least for the initial purchases.

There is more than one variant of this phone, though. The price tag we've mentioned is for the entry-level model. The DOOGEE S95 Pro with 128GB of storage is available for $359.99, while that model with 256GB of storage costs $399.99.

Those two variants are also discounted. They usually cost $399.99, and $499.99, respectively. All three devices look the same, but there are some differences in the spec department, though they're also minor.

The device comes in three variants

The DOOGEE S95 comes with 6GB of RAM and 128GB of storage, while both 'Pro' models include 8GB of RAM, and 128GB and 256GB of storage, respectively. All three phones are fueled by the same processor, have the same display, same battery, etc.

A 6.3-inch fullHD+ display is being used in these phones. The MediaTek Helio P90 64-bit octa-core processor fuels the DOOGEE S95 smartphones.

A 5,150mAh battery is included in the package, and it supports 12V/2A fast wired charging. The phone also supports wireless charging. You'll notice three cameras on the back of these devices, a 48-megapixel main camera, and two 8-megapixel ones.

Android 9 Pie comes pre-installed on all three smartphones. This is a relatively light version of Android, though DOOGEE did include some of its own software on top.

The device sports a waterdrop display notch, and it's actually quite sturdy in terms of its build. This is a rugged smartphone after all, so that is to be expected.

This handset is referred to as modular, because DOOGEE sells some modules for it, separately. You can get a 3,500mAh magnetic battery module (it's called Powerbank Module). That module charges independently, and supports 10W charging.

In addition to that, a HiFi Speaker Module is also available, and it will add a 6W Hi-Fi speaker into the mix. If you're interested in the DOOGEE S95, purchase links are available down below.