UPDATE 2: All of these images have been photoshopped, and are thus fake. The person who shared them via Discord actually admitted that they’re fake. He photoshopped them on purpose, just to prove a point. That doesn’t change the fact that the OnePlus 8 Pro will probably look similar to what we’re seeing in the images below, as @OnLeaks shared CAD-based renders at the end of last year. Still, the images included in the gallery down below are fake, as Max J. suggested. He’s actually the person who relayed this message from ‘Lao OP inside’, who shared it via Discord. 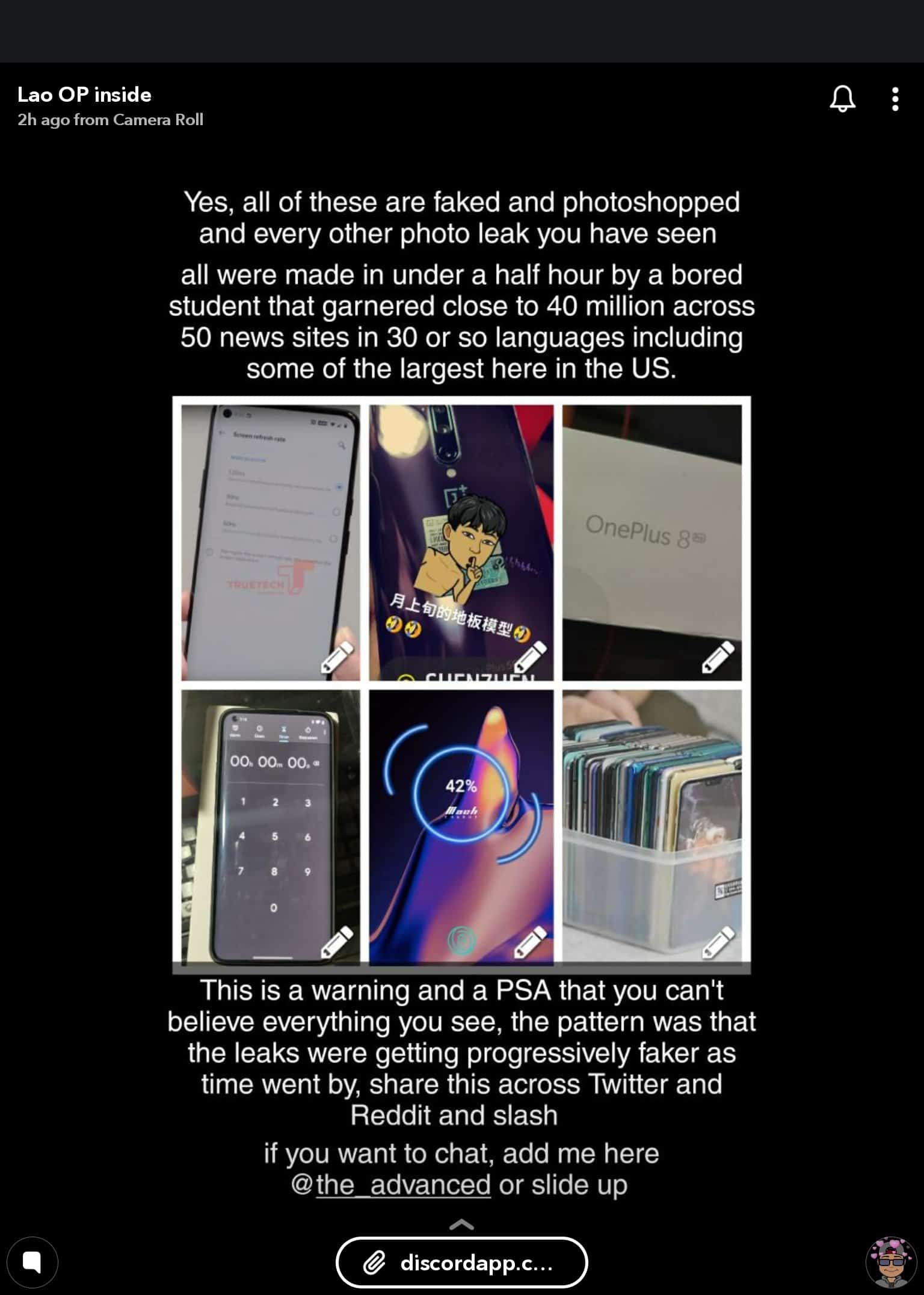 UPDATE: Following two real-life images of the OnePlus 8 Pro back side, and its specs, a new image has surfaced. This image seems to have been taken by the same source, and this time around, we get to see the phone’s front side. This does bring a bit more credibility to the leak, as we can see a display camera hole in the top-left corner. You can also see that the phone’s display is curved, and that the bezels are really thin, despite the fact the phone’s placed in a case.

At first, these images and specs may seem real, but Max J. doesn’t think so. He actually reshared those two real-life images, and screenshot of the phone’s specs, claiming that the info is fake.

He did not elaborate anything, except hinting that the phone in the pictures is probably the OnePlus 7T Pro 5G. One of the images does seem to show a phone with a purple back, though, or at least it looks like that due to the lighting in the room.

Its back camera module does look like the one on the OnePlus 7 Pro and 7T Pro, so it’s possible this is just a masked variant of one of those two phones.

If an image of the front side of the phone leaked, we’d have more info to share. This way, we’re prone to believing Max J., as these leaks do seem to be sketchy.

The same goes for the phone’s specifications. If you take a look at the screenshot included in the gallery down below, you’ll see its alleged specs.

Now, this screenshot was allegedly taken on the phone itself, via the ‘About phone’ section. It does seem somewhat real, but it could be photoshopped, of course.

The device will be fueled by the Snapdragon 865

Some of these specs are probably spot on, though, as the OnePlus 8 Pro specs surfaced several times thus far. This image says that the device will be fueled by the Snapdragon 865, which is accurate.

It also suggests that it will ship with 12GB of RAM and 256GB of storage, at least one of its variants. The phone will sport 64, 20, and 12-megapixel cameras on the back.

A 6.65-inch 120Hz Fluid AMOLED display is also mentioned here, and the same goes for Android 10. The phone’s model number is listed as HD2023. This screenshot also suggests that the phone will support 5G.

This screenshot also shows a render of the phone itself. As you can see, the OnePlus 8 Pro will essentially look like the OnePlus 7(T) Pro with a display camera hole in the top-left corner, at least from the front.

This render is probably at least somewhat accurate, as we’ve seen legit renders of the OnePlus 8 Pro already. The device’s CAD-based renders have popped up at the end of last year. In any case, take the leaked images with a grain of salt, as a well-known tipster suggests they’re not real.