According to the latest data from Strategy Analytics, the global smartphone market was slightly down year over year (YoY) in 2019. A total of 1.41 billion smartphone units were shipped last year, down one percent from 1.43 billion units a year earlier. Linda Sui, Director at Strategy Analytics, attributed this decline in shipments to "mild inventory build in the second half of the year."

While Samsung topped the overall chart for 2019, it was Apple who won the shipment battle in the last three months of the year. Riding on the back of strong iPhone 11 sales, the Cupertino-based company shipped 70.7 million iPhones in Q4 2019 to capture an 18.9 percent market share and sit atop the chart. Those figures stood at 65.9 million and 17.5 percent respectively in Q4 2018. This was Apple's best growth performance since 2015.

Xiaomi and Oppo completed the top five with 8.8 percent and 8.1 percent smartphone market share respectively in Q4 2019. Xiaomi saw a growth in the fourth quarter thanks to its strong position in India and improved performance in Europe. Oppo, meanwhile, is finding it hard because of sustained pressure from its homegrown rivals. The Chinese company had a market share of 8.3 percent in Q4 2018.

Samsung may have had an underwhelming fourth quarter, but 2019 was still a good year for the company. It once again topped the chart of global smartphone shipments.

Huawei's growth is driven by strong demand in its home country China. However, the company is slowing down and will likely have trouble maintaining that growth this year.

This marks a slight YoY decline in both shipments and market share. The company had shipped 206.3 million iPhones a year earlier, accounting for 14.4 percent of the global smartphone shipments.

Xiaomi and Oppo once again complete the top five with 8.8 percent and 8.1 percent market share respectively.

The combined shipments of all other smartphone vendors around the world accounted for 31.1 percent of all shipments, down from 34.4 percent at the end of 2018. 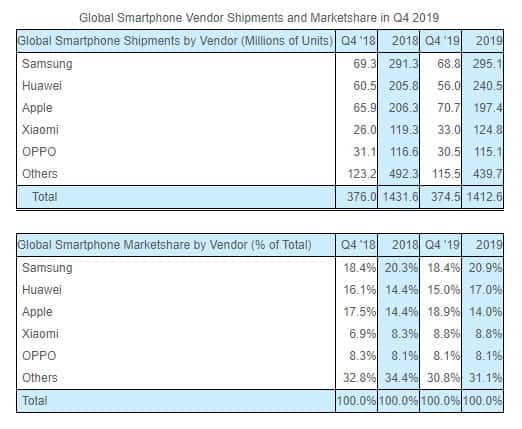