Believe it or not, Samsung’s mid-ranger is the best-selling Android smartphone of 2019. The device in question is the Galaxy A10, Canalys revealed in its new report.

Canalys actually shared two graphs, revealing global sales for both 2019 as a whole, and Q4 2019. We’ll talk about sales in general, first, and then spend some time on the other graph.

As already mentioned, the Galaxy A10 was the best-selling Android smartphone of 2019. It was not the best selling smartphone of last year, though. As it’s usually the case, that place has been taken by one of Apple’s iPhones, as you can see in the graph below. 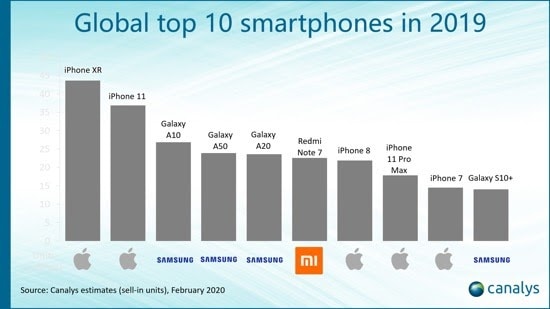 The iPhone XR managed to take the top spot, while it is followed by yet another phone from Apple. The iPhone 11 is second-placed, and those two devices are followed by three Galaxy-branded phones.

The Galaxy A10 managed to take the third spot, while it is followed by the Galaxy A50 and A20. Samsung’s mid-range Galaxy A lineup of smartphones seems to be quite popular.

The Xiaomi Redmi Note 7 is sixth-placed, while it is followed by the iPhone 8, iPhone 11 Pro Max, iPhone 7, and the Galaxy A10+.

Now, if you take a look at the graph below this paragraph, you’ll see the best-selling devices of Q4 2019. The first top spots are taken by Apple’s iPhone handsets. The top three spots are claimed by iPhone 11s, which is not surprising considering that they arrived just in time to boost Apple’s Q4 sales. 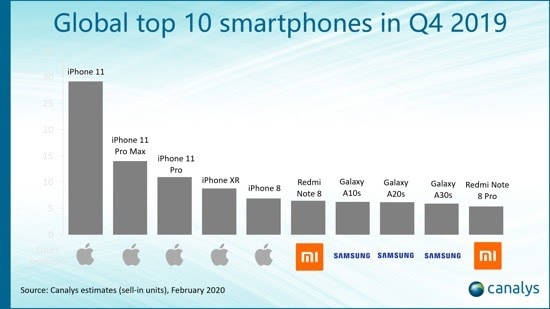 The iPhone XR is well-placed as well, as it is fourth in this order. The iPhone 8 also managed to find its way to the top 5 best selling handsets of Q4 2019.

As you can see, Apple’s handsets are dominating sales charts once again. It is also not that surprising that Xiaomi and Samsung are claiming the rest of those charts.

We are a bit surprised that not a single other phone managed to find its way in the top 10, though, smartphones from only three companies are dominating sales on a global scale.