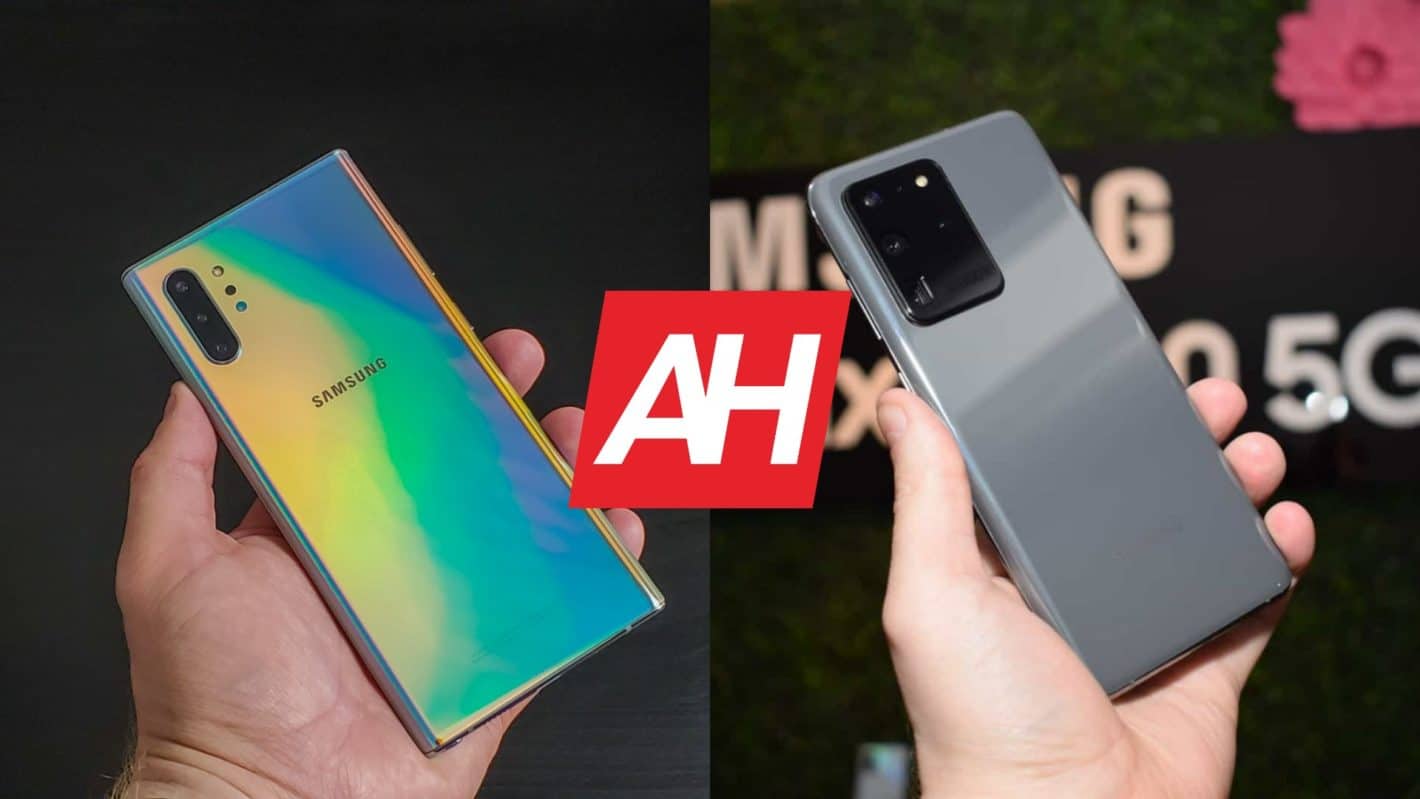 As per usual when it comes to our comparisons, we'll compare these two phones across a number of categories. We'll start by comparing their specifications, and then move to design, display, and several other categories. Having said that, let's kick off the Galaxy Note 10+ vs Galaxy S20 Ultra comparison, shall we.

The Galaxy S20 Ultra is both taller and thicker than the Note 10+, but it's not wider. That's mainly thanks to its display aspect ratio, as the phone does include a slightly larger display. More on that in the display section, though. Both phones are extremely slippery, and their size doesn't really help anything. They're quite difficult to use in one hand due to their size and the fact they're slippery, so using a case is definitely a good idea.

The Galaxy S20 Ultra is also considerably heavier than the Note 10+. That is something you should definitely note, as it's 26 grams heavier, which is easily noticeable. The Galaxy S20 Ultra comes with a frame made out of stainless steel, and that is the main reason. The Galaxy Note 10+ also has a frame made out of metal, but it's aluminum. The S20 Ultra's frame is tougher, but also heavier. We cannot say this enough, you will feel the difference, easily. If you're not into big and bulky phones, the S20 Ultra should be avoided. If you are, then it's the perfect device for your taste. Both of these phones look and feel great, and they're quite similar in many ways. It's all a matter of preference on your part.

Both of these phones offer huge displays. The Galaxy Note 10+ comes with a 6.8-inch 19:9 display, while the S20 Ultra has a 6.9-inch 20:9 display. Both of those displays are Dynamic AMOLED units, and both feature QHD+ resolution. The Galaxy S20 Ultra's resolution is slightly higher as the phone is taller. Both displays are protected by a sheet of Gorilla Glass 6, which will give you some peace of mind.

Both of these panels can reproduce HDR 10+ content, and truth be said, they're amongst the best displays in the market at the moment. They look amazing, the colors are great, blacks are truly black, contrast is great… there's very little to complain about here. The Galaxy S20 Ultra does have one significant advantage, if you care about that sort of thing. We're talking about refresh rate, of course.

The Galaxy Note 10+ includes a display with 60Hz refresh rate. The 'Ultra', on the other hand, sports a 120Hz display. Everything you do on that display will feel smoother because of it. After you use the S20 Ultra's display for a bit, you'll hardly be able to go back to a 60Hz panel. What is worth noting, however, is the fact that you cannot use 120Hz refresh rate and QHD+ resolution at the same time. Samsung did not make this possible, probably due to battery drain.

In terms of performance, you can't go with either one of these phones. The Galaxy Note 10+ is still an extremely fast smartphone, it did arrive about half a year ago, so… that is to be expected. The Galaxy S20 Ultra does offer fresh software and more powerful specifications, though. It is quite a bump compared to the Galaxy Note 10+ in the spec department, that's for sure. Is that noticeable in the performance department? Well, barely.

In most everyday tasks, you'll be hard-pressed to find the difference between the two. Both are extremely fast in opening up apps, multitasking, while gaming is a job on both phones. The Galaxy S20 Ultra does seem a little bit faster, just a tiny bit, though. The S20 Ultra does include faster RAM (LPDDR5), and a more powerful SoC, plus new software optimizations, so that's not surprising.

Should that matter to most people? Well, no. Pretty much everyone will be happy with the performance out of both of these smartphones. The Galaxy S20 Ultra is more future-proof, that's for sure. Its internals guarantee that it will perform on this level longer than the Galaxy Note 10+. That is to be expected, however, as it's a generation newer smartphone. So, is the Galaxy S20 Ultra better in terms of performance? Yes. Will many people notice that? No.

The Galaxy S20 Ultra has a considerably larger battery than the Galaxy Note 10+. Its display is barely any larger, but that high refresh rate does require more battery power, that's for sure. We did not get a chance to fully test out the S20 Ultra battery just yet, but we did use the phone for a while. We do expect it to be on the same level as the Galaxy Note 10+, at least based on what we've seen thus far. The Galaxy Note 10+ offered really solid battery life, it managed to get past the 6-hour screen-on-time mark for us without a problem.

The Galaxy S20 Ultra will be able to do the same, at the very least. Do note that we've used the phone with a 120Hz refresh rate setting on, at a fullHD+ resolution. As already mentioned, earlier in this comparison, you cannot use 120Hz at QHD+ resolution, so you have to choose. FullHD+ resolution on this display looks great, and the vast majority of people won't even be able to tell the difference. All in all, the Galaxy S20 Ultra will offer really good battery life, that's for sure. Not the best we've seen, but it's at least on par with the Galaxy Note 10+.

Both devices are capable of 45W fast charging, by the way. Neither of the two phones includes a 45W charger, though. You'll get a 25W charger with both phones, and will need to buy a 45W separately. You can also take advantage of 15W wireless charging on both phones. So they're on par in that regard as well.

In terms of cameras, the Galaxy S20 Ultra is a clear winner. We've had enough time with the S20 Ultra to see that Samsung really did come through with its camera promise. The Galaxy S20 Ultra offers quite a bit of versatility in that department, and images from the main sensor are great. The phone is also capable of taking advantage of 10x hybrid optical zoom. You can even utilize 100x zoom thanks to the phone's periscope camera.

Images from its main camera look sharper than what the Galaxy Note 10+ has to offer. They also look more realistic, and the colors are more accurate. The dynamic range from this camera is really, really good, better than what the Note 10+ has to offer. That's not surprising, though. The sensors that Samsung included in the S20 Ultra are more powerful. On top of that, Samsung did a great job with camera software as well. You'll know more soon, when we finish our S20 Ultra review. One thing is for sure, though, the Galaxy S20 Ultra trumps the Galaxy Note 10+ in this department. The Note 10+ still has really good cameras, but it never was in the top 3 smartphone cameras. The S20 Ultra will be amongst the best, it seems.

As far as audio is concerned, we did not really notice much difference between the two. Both phones include stereo speakers, and they're placed in rather similar spots. The main loudspeaker is located on the bottom of both phones. The secondary speaker sits above the display, and it is front-facing. Speakers on both phones sound really good. They're rich enough, and get loud enough, with very minimal distortion at high volumes.

Neither of the two phones includes a 3.5mm headphone jack. Sounds via a solid pair of headphones is rich enough, though. Highs are very rich, and the sound is well-balanced. We did not really notice much difference here, these two phones seem to have similar audio setups, if not identical. Do note that speakers on both phones are tuned by AKG, if that means something to you.

The Samsung Galaxy S20 Ultra is the winner of this comparison. That is not surprising for anyone, I'd say. The device comes with considerably more powerful specifications, and Samsung did a good job in the software department. If you do have the cash to spend on this phone, it is a better buy than the Galaxy Note 10+. Well, that's true if you don't need an S Pen. If the S Pen is a factor, and you would use it for productivity, then the Galaxy Note 10+ is a no-brainer. It is much more affordable than the S20 Ultra at the moment, and it does bring quite a few features thanks to the S Pen. That brings us to the end of our Galaxy Note 10+ vs Galaxy S20 Ultra comparison. The choice is up to you, but the S20 Ultra is the winner here.