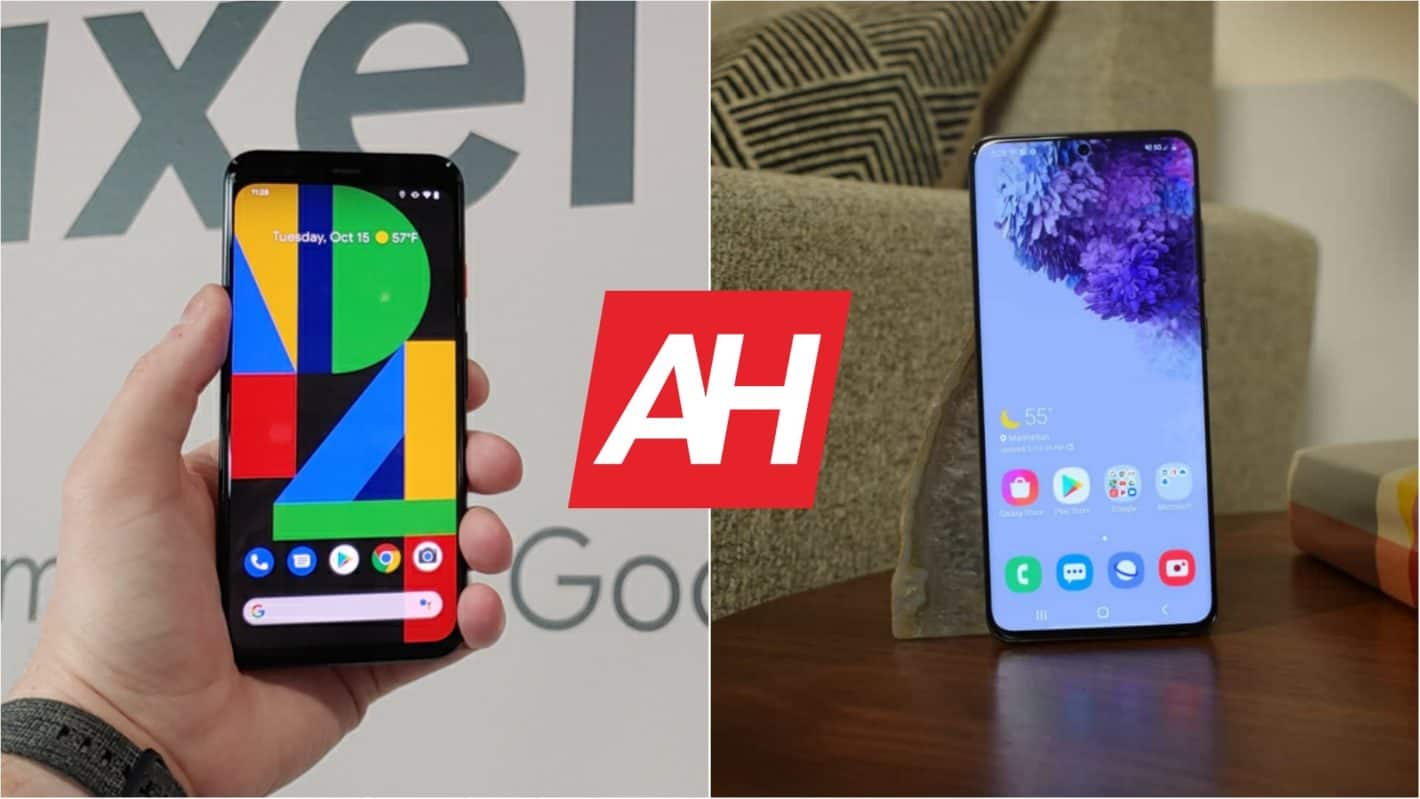 The time has come to compare the Google Pixel 4 vs Samsung Galaxy S20. Do note that these are the smallest, and most affordable Pixel 4 and Galaxy S20 units we’re looking at here. Still, they’re both considered to be flagship-grade offerings from their respective companies, even though they’re not technically the most powerful variants Pixel 4 and Galaxy S20 variants.

Both of these phones are quite compelling, and some of you are probably trying to decide which one to get. The Galaxy S20 is newer, it’s even a generation newer, as it comes with a new processor, and a number of newer components. Is that enough to win against the Google Pixel 4 in a direct comparison, though? Well, that’s what we’re here to find out. The Pixel 4 is now considerably more affordable than the Galaxy S20, so it may be worth a look.

As already mentioned, both devices are quite compelling, but we’ll compare them in a number of categories, just to give you a better idea of what you’re in for. We’ll kick things off with specifications, and then move to their designs, displays, and so on. That’s more or less it, let’s kick off this Pixel 4 vs Galaxy S20 comparison, shall we.

These two phones are quite different in terms of the overall design. The Google Pixel 4 offers fewer curves, and it’s considerably less slippery than the Galaxy S20. The phone’s frame is more pronounced around the device, and more grippy at the same time. Both devices do feature glass backs, though. The Galaxy S20’s back side is curved, though, as is its front side. That doesn’t leave much of its frame to be available around the device itself, and it makes the whole phone extremely slippery.

The Galaxy S20 offers considerably thinner bezels than the Pixel 4. It comes with almost non-existent bezels, and a display camera hole. The Pixel 4 does not have a notch, or a display hole, but it does have noticeable bezels. Its top bezel is actually thicker than its bottom bezel, which some of you may find to be odd. Physical keys are placed on the right-hand side of both phones, and neither of these phones offers an audio jack.

Camera modules are placed in the same spot on both phones. They’re located in the top-left corner, on the back of these devices. The Pixel 4’s camera module is wider, while the Galaxy S20’s is taller. The Galaxy S20 does include one more camera than the Pixel 4, as it has three, compared to two on the Pixel 4.

Do note that you cannot utilize 120Hz refresh rate and WQHD+ resolution at the same time on the Galaxy S20, though. That’s not possible, at least not at the time of writing this comparison, but Samsung is working on it. Both phones can reproduce HDR content, though only the Galaxy S20 can do HDR10+. The Gorilla Glass 5 protects the Pixel 4’s panel, while the Gorilla Glass 6 comes with the Galaxy S20’s display.

What’s there to say about performance? Well, both phones are great in this regard. The Galaxy S20 does come with considerably more powerful internals, but the Pixel 4 still holds up great. The Snapdragon 855 inside the device is still plenty powerful, while the phone includes enough RAM. Still, the Galaxy S20 doubles that RAM, and it includes newer RAM, LPDDR5 vs LPDDR4X. It also comes with faster storage, UFS 3.0 compared to UFS 2.1 on the Pixel 4.

As already mentioned, both devices are extremely fast, but from what we could see, we’d give a small advantage to the Galaxy S20, at least at the moment. We don’t know what will happen in a couple of months, but the Galaxy S20 did offer slightly better performance across the board. Both phones can handle everyday tasks with ease, though, from opening / closing apps, multitasking, browsing the web, gaming, and so on.

The Galaxy S20 is more future proof, though. As we mentioned already, it does come with considerably more powerful internals than the Pixel 4. On the flip side, the Pixel 4 does include stock Android, and will get updates faster, so… it all depends on what you prefer. Samsung’s flagship comes with the company’s One UI skin on top of Android. The Galaxy S20 is the winner here, not by much, but still.

If battery life is something you’re concerned about, you should avoid the Pixel 4. Out of all the mainstream flagships in 2019, the Pixel 4 probably has the worst battery life. Google included a really small battery inside of this phone, and it simply cannot cope with the phone’s internals and high refresh rate. At times, we were even unable to cross the 4-hour screen-on-time mark in a day. It usually goes over that mark, but that’s well below other flagships. Your mileage may vary, of course.

The Galaxy S20, on the other hand, is capable of crossing that 6-hour threshold on a regular basis. We have to do a long-term battery test on the phone in order to see what’s what, but from what we’ve seen thus far, the Galaxy S20 offers really good battery life. It’s nowhere near the best battery life smartphones out there, but it’s miles better than the Pixel 4. Even with 120Hz option activated, it can run at fullHD+ resolution without a problem, and often get past that 6-hour mark. We’ll see what will happen once Samsung enables WQHD+ at 120Hz option.

The Google Pixel 4 and Pixel 4 XL are still regarded to be one of the best camera smartphones in the market. So, does the Galaxy S20 beat the Pixel 4 in terms of camera quality? Well, not necessarily. Both phones are really competent in that regard. During the daytime, both phones can capture great-looking pictures, with great dynamic range, contrast, and white balance. The Pixel 4 images in this setting tend to be more contrasty, though.

Both phones do a great job in low light conditions, though we’d still give the Pixel 4 an advantage in such conditions. The samples from the Galaxy S20 may seem more realistic, but the Pixel 4’s low light pics look better in our opinion. The Pixel 4 does not have an ultrawide camera, though, and the Galaxy S20’s is great. Once you start using that ultrawide shooter for landscapes and whatnot, you’ll hardly go back. So, the two cameras pretty much balance out, depending on what you’re looking for in a camera. You can’t go wrong with either one of these, though.

As far as audio quality is concerned, well, both phones are pretty good. We do have to give a slight advantage to the Galaxy S20 Ultra. Now, both devices offer stereo speakers. The main speaker on both phones is placed on the bottom. The secondary is of a front-facing variety, and it sits right above the display. The Galaxy S20’s speakers are tuned by AKG, by the way.

The audio quality coming from those speakers is really good on both phones. They get pretty loud, and the distortion is fairly minimal at high volumes. They deliver slightly different sound, but nothing that should worry you. They’re basically on the same level. We do have to say that the Galaxy S20’s speakers are a bit louder overall, though. 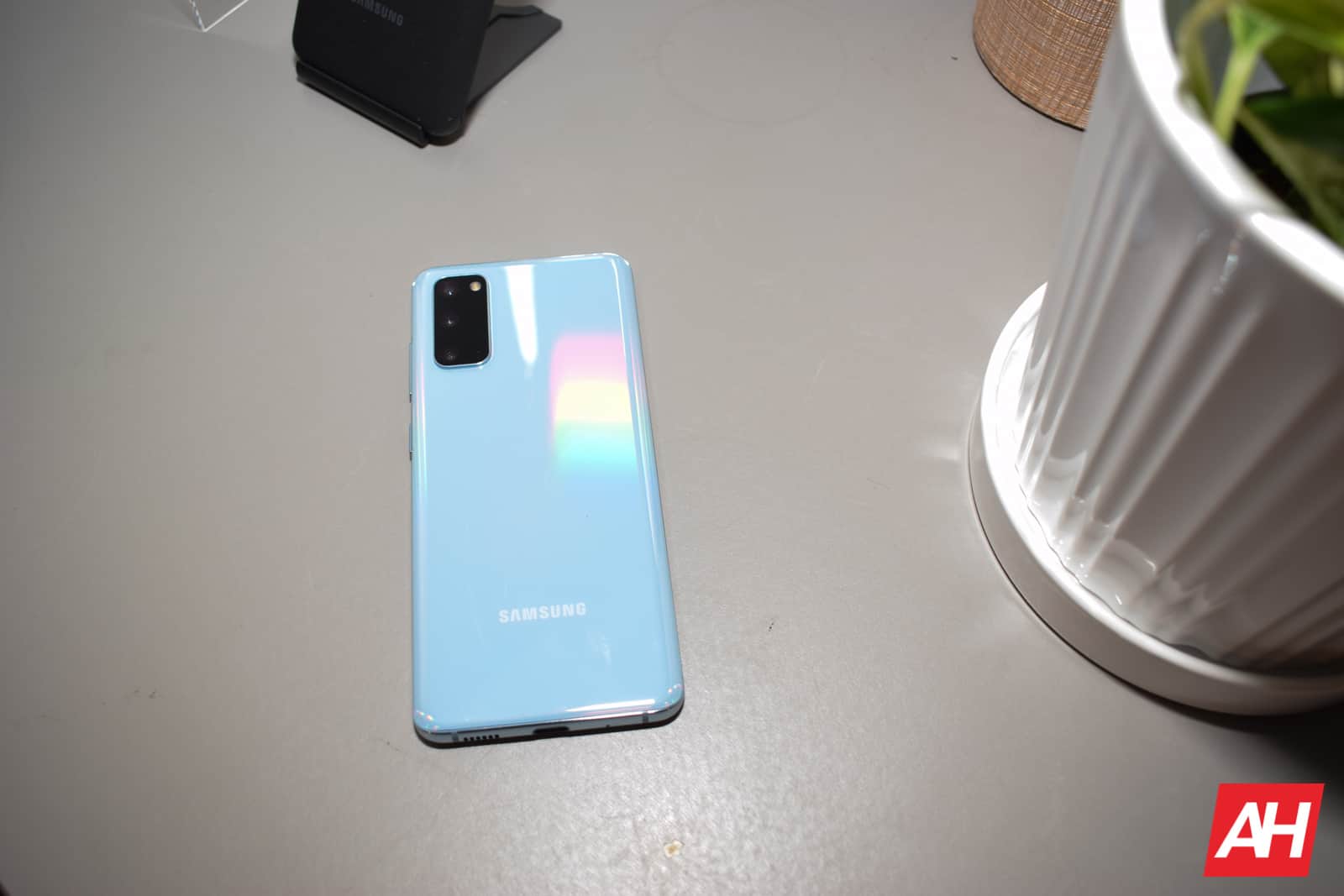 Neither of the two phones has a 3.5mm headphone jack. You’ll be just fine using a Type-C connection, though, and the same goes for Bluetooth 5, which is available on both phones. Sounds output through a quality pair of headphones is on a high level on both phones, but we’ve noticed better highs and mids coming from the S20. It’s not that much better, though, so it’s not something that should worry you. It does give the S20 a slight advantage, though.

That brings our Google Pixel 4 vs Samsung Galaxy S20 comparison to the end. Needless to say, the Galaxy S20 is the winner here. The phone offers a better design in our opinion, while it’s more future proof at the same time. Audio output is slightly better overall, while the phone offers superior battery life and charging.

The Pixel 4 still holds up great, except in terms of battery life, it’s abysmal in that regard. The performance is still great, though, and its cameras are still amongst the best around. If you can get a great deal on the Pixel 4, and don’t care much about battery life, the phone is very much worth it. In general, though, the Galaxy S20 is the better choice.