The OPPO Find X2 has just surfaced online, and revealed its specs… well, partial spec sheet. It popped up in Vietnam, and what's interesting is, that it was listed by OPPO's official account.

This listing surfaced on one of the Vietnamese retailers, and it reveals some information about the device. First and foremost, it is worth noting that the image is not legit. The image that is listed shows the OPPO Find X, not the Find X2.

The OPPO Find X2 will include a display camera hole, unlike the phone that is shown here. It will still have a curved display, and extremely thin bezels, though.

This online listing of the OPPO Find X2 reveals its specs, well, most of them

This listing reveals that the device will feature a 6.5-inch AMOLED display, with Corning's Gorilla Glass 6. The resolution isn't listed here, but it will include a WQHD+ panel, as OPPO's executive confirmed.

The refresh rate of the display is also not listed, but we know that as well. You can expect to see 120Hz refresh rate on this phone, that is also something that has been confirmed already.

All in all, the OPPO Find X2 will have the same display as the OnePlus 8 Pro, or at least an extremely similar one. That is to be expected, though, as those are sister companies we're talking about.

The chipset hasn't been mentioned here, but the device will be fueled by the Snapdragon 865. That piece of information had been shared by OPPO.

A variant with 8GB of RAM has been listed on the website of this retailer. A 12GB RAM model did surface in benchmarks, though, so it seems like both will be available. This 8GB RAM model comes with 256GB of storage.

The device will include extremely fast charging, and fast wireless charging

Speaking of which, OPPO will probably utilize LPDDR5 RAM and UFS 3.0 storage on this phone. A 4,065mAh battery is also listed here, but its charging hasn't been mentioned. Well, the device will probably include 65W Super VOOC 2.0 wired charging, along with 30W wireless charging.

This phone will support 5G connectivity, though it's possible we'll see both 4G and 5G variants out there. A fingerprint scanner hasn't been mentioned in this listing, but the device will almost certainly include it. We're expecting to see an in-display, optical fingerprint scanner.

The price tag is listed here as well, but it seems to be a placeholder price tag, nothing else. The phone is listed for VND 40,000,000, which converts to $1,700, and that will definitely not be its price tag. This listing also reveals that the phone will be available in Blue Ocean and Blue Sea Night colors, at the very least. Those are basically all the OPPO Find X2 specs that surfaced online thus far. The device was supposed to launch at the end of February, but the launch has been moved to March. The reason behind it is the cancellation of MWC 2020. 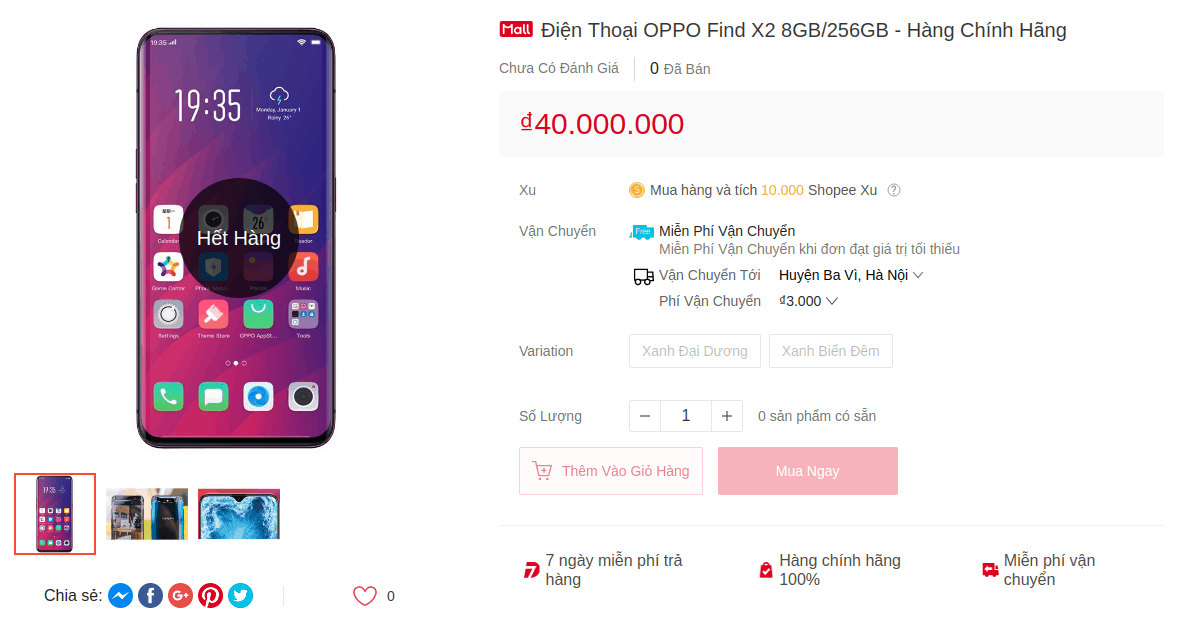