Microsoft's Android foldable is closer to launch. The Surface Duo with a camera flash has appeared on public transit.

A photo of the device in the wild, posted by Israel Rodriguez, shows the device. A Microsoft employee has the device next to his umbrella. The device shows a dual-display setup (two displays instead of one folded display). There's the time and a row of icons on the left display and text on the right display.

The weather appears to be 4 degrees, indicative of a cold environment. Rodriguez says "I just saw a guy in Vancouver's SkyTrain playing around with Surface Duo. Got photos and videos." Vancouver, BC (British Columbia) is as cold a place as it gets on the North American continent.

A camera flash appears at the top of the device along with a selfie camera. The new selfie camera and flash were not on the original Surface Duo prototype. This indicates that Microsoft has upgraded the original model.

Surface Duo is in employee testing

Rodriguez didn't state whether or not he could see if the person holding the Surface Duo is a Microsoft employee or not. And yet, with the device in the wild for the first time since Microsoft's announcement a few months ago, it's safe to say that the holder is either an employee or developer. At this early a testing stage, the person in question is more likely an employee.

According to Windows Central, Microsoft is now allowing employees to test the Surface Duo. Perhaps this is to ensure that the device works for those who will use it within company confines. With the new selfie camera and flash as opposed to the previous rear-camera design, Microsoft is upgrading the device. Perhaps employee testing is to ensure the device is up to par before making some last-minute design changes. 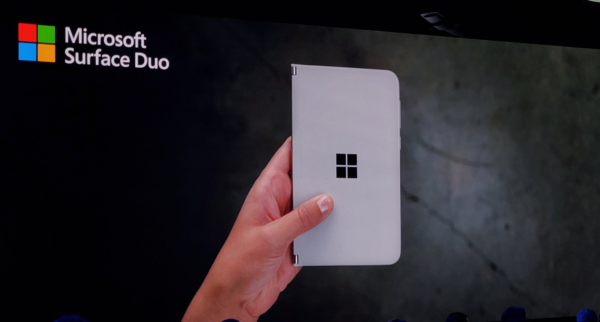 Microsoft announced its Surface Duo back in a keynote address in October 2019. The device contains two 5.6-inch displays and runs Android instead of Windows Mobile. The two displays make the device a dual-display phone instead of a foldable phone.

In this regard, the Surface Duo isn't in the same camp as the Samsung Galaxy Fold and the Motorola Razr (2019). It matches more of the ZTE Axon M and the LG G8X ThinQ Dual Screen .

Installing Android on its dual-display smartphone ensures that it will have universal appeal. It's no secret that Android is the world's most popular mobile operating system.

Windows has a handful of users compared to the over 2 billion people using Android daily. The dual-display design certainly prevents the device from having manufacturing defects and seems to be the easier design for foldables for now.

As for availability, Microsoft says the Surface Duo will be available in "Holiday 2020," a reference to the Christmas season most likely. With that much time left before the product goes on sale, employee testing will help Microsoft make more tweaks and changes to ensure its success.

Advertisement
Trusted By Millions
Independent, Expert Android News You Can Trust, Since 2010
Publishing More Android Than Anyone Else
0
Today
68
This Week
68
This Month
1358
This Year
111463
All Time
Advertisement