HTC has just announced a new smartphone, the Wildfire R70. This is the company’s very first smartphone announcement this year. The company hasn’t really announced a new phone since November last year, when the Desire 19s arrived.

The HTC Wildfire R70 is an entry-level smartphone

No, the HTC Wildfire R70 is not a flagship phone, not even close to that. Its name suggests this is a budget phone, as it’s a part of the company’s ‘Wildfire’ lineup. If that was your assumption, you’re completely right.

HTC hasn’t really announced a flagship smartphone since 2018. We’ll see if the company plans to do that at some point this year, but for the time being, let’s focus on the R70 Wildfire.

This device got announced in both India and Thailand. It’s an entry-level phone, in fact. The phone doesn’t look half bad, actually. Its ‘chin’ is a bit thicker than you’d expect, but do keep in mind this is an entry-level smartphone.

The device also has a display notch, a waterdrop display notch. All of its physical keys are located on the right, while there are three cameras on the back. Those cameras are vertically aligned, and an LED flash is placed below them.

HTC’s logo can also be found here, and the same goes for the phone’s loudspeaker. Unfortunately, the device has a rear-facing loudspeaker, and that is the only speaker on this device.

The phone includes 2GB of RAM and 32GB of expandable storage (expandable up to 256GB via a microSD card). Android 9 Pie comes pre-installed on this device, with HTC’s additions on top.

A 4,000mAh battery is also a part of the package, and it supports 10W charging. You’ll find two nano SIM card slots inside of this phone, one of which can be used for microSD card storage expansion. A 3.5mm headphone jack is present here, while you won’t get a Type-C USB port here. The HTC Wildfire R70 comes with a regular micro USB port. Bluetooth 4.2 is also included. 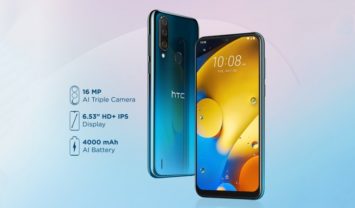