A new leak has popped up that shows what is believed to be the official design of the Huawei P40.

The image looks just convincing enough to make it believable. Especially when you consider the design shown past leaks. One in particular shows the P40 Pro rendered with a case. The only difference being that it has five cameras on the back instead of three.

This new leak shows the three-camera design, along with a dual-camera setup for the front-facing cameras. Other than the cameras on the back, the designs are completely the same. Which shouldn’t be surprising as Huawei and other manufacturers tend to keep the designs mostly the same for standard and pro model phones.

Huawei is sticking with three cameras on the back

Huawei is choosing to keep the camera sensor count on the back of the P40 to three, just like it did with the P30 and P30 Pro. As well as the Mate 30 Pro.

Meanwhile, it’s upped the camera sensor count on the P40 Pro to five rear sensors. Helping to differentiate between the two models, and thus giving consumers the ability to choose between phones with slightly different capabilities.

Of the three back cameras included here, one of them is a ToF sensor, while the other two are your standard and wide-angle lenses. There is also one LED flash sensor to the right side of the camera array.

Based on the design of this render the front side of the phone will also use a punch hole camera setup for the two sensors. With extremely slim bezels that are almost nonexistent.

In addition to the cameras, the P40 has a USB-C port for charging, and no headphone jack. It will also probably come in multiple color options, though only the one pictured here has popped up so far.

Huawei may not announce this phone next month

Huawei might not announce the P40 and P40 Pro at Mobile World Congress next month. In fact speculation is that the company will reveal the new phones in April.

That said it could reveal the timing of the announcement event at MWC. And if the event is in March or April it would make sense, given that the company has revealed both the P20 series and the P30 series in those months.

The last time it announced a P-series phone at Mobile World Congress was the P10 and P10 Pro. 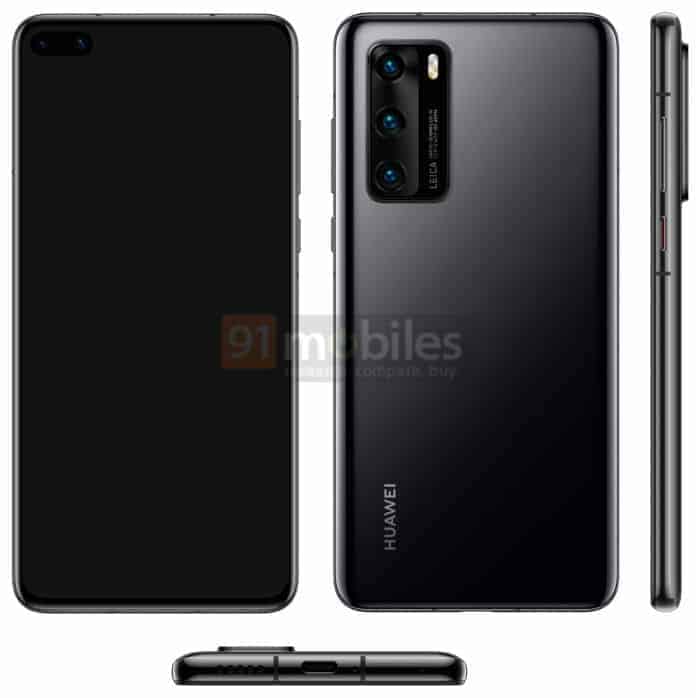