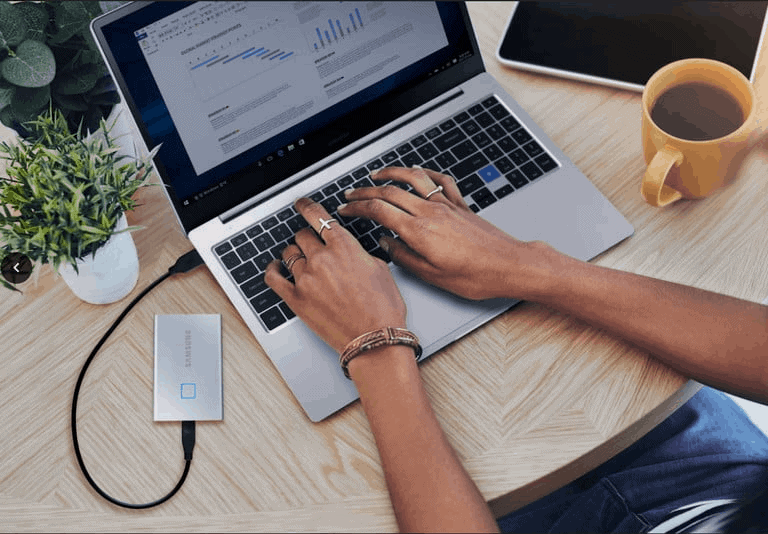 Samsung just announced a brand new Portable SSD, the T7 Touch. It has a feature that many of us didn't expect to see on a portable SSD, likely ever. And that's a fingerprint sensor.

Now while that might sound pretty silly, it's actually a really good idea. By adding a fingerprint sensor, users are going to be able to keep their files secure, without having to worry about remembering a password. Just simply use your fingerprint to unlock the T7 Touch.

The Samsung T7 Touch is small but fast

The Samsung T7 Touch  is pretty small, we're talking about roughly the size of a business card. It's obviously a bit thicker, since it does use a USB-C connector to connect to your laptop. But still mighty small, making it easy to toss into a bag.

Despite being pretty small, the Samsung T7 Touch portable SSD can still hit some pretty insane speeds. We're talking about maxing out at 1050MB/s on the read and 1000MB/s on the write. That is pretty insane, and likely not speeds you'll ever see if you buy the T7 Touch in 2020.

That's because most laptops and desktops don't reach anywhere near that speed. So in order to hit 1,000MB/s speed, the device it is connecting too, will need to hit that speed too.

The Samsung T7 Touch will come in two colors: Black and white. It will also be available in three capacities: 500GB, 1TB and 2TB.

Samsung says that these will be available for purchase later this month. Though no specific date was mentioned just yet.

These are actually some pretty incredible prices for these capacities, especially considering the speed of these drives. Getting 2TB of SSD space for $400 was insane a few years ago. Considering 500GB SSD drives were over $500 just about five years ago. These drives are going to be great for content creators that need to have fast storage, and plenty of it. Since this is a portable drive, it's going to be easy to take it out and work at a coffee shop without needing to plug in something else to an adapter. That's definitely nice.