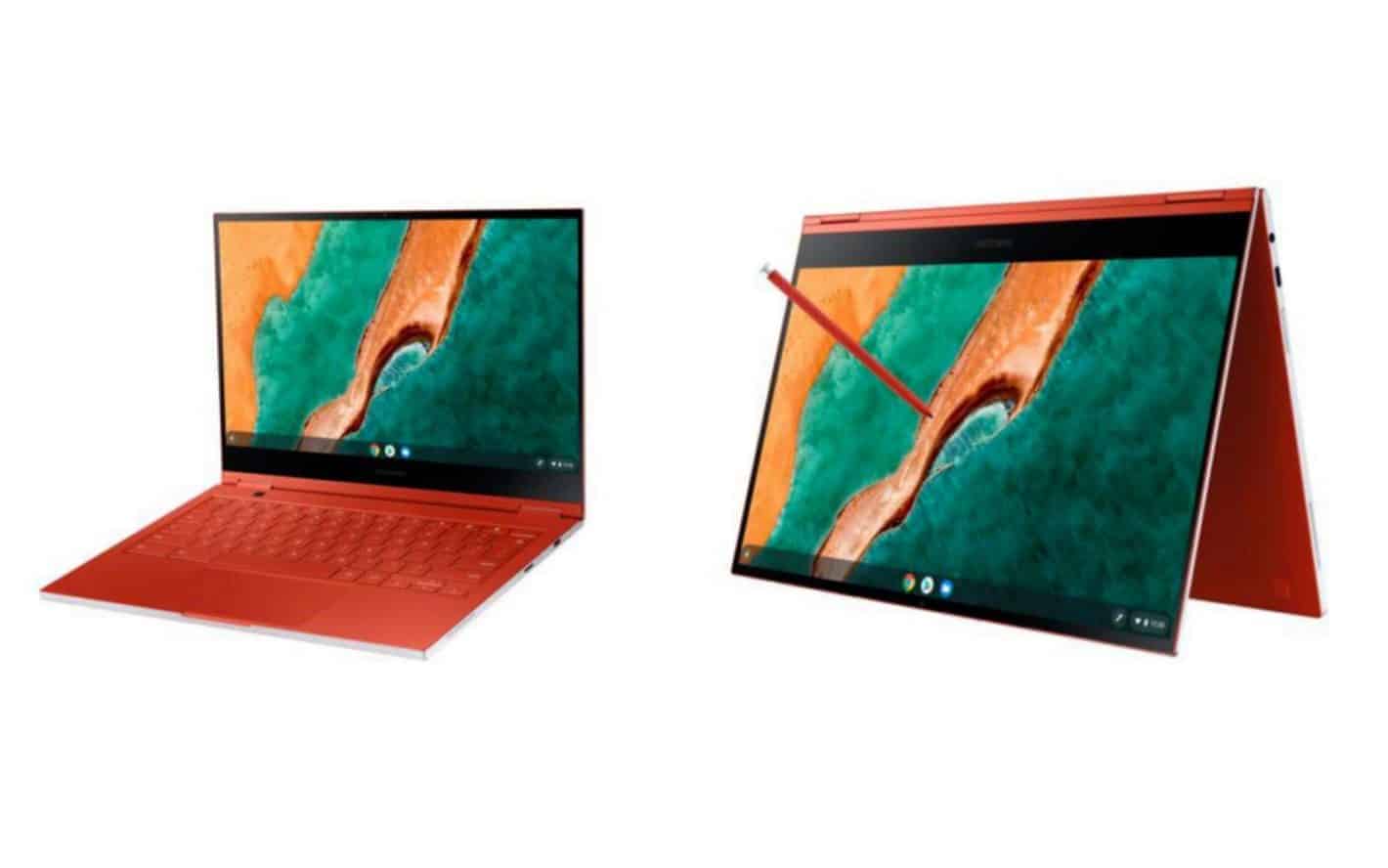 Samsung took to this year's CES 2020 event in Las Vegas with gusto, and that includes the announcement of a brand new Galaxy-branded Chromebook. The company is keeping details on the device slim for the time being. But it will undoubtedly reveal a lot more moving forward and quite a few details can be gleaned from the images the company has released alone.

To begin with, the new Samsung Galaxy Chromebook will continue in the vein of the Samsung Chromebook Plus and Pro models in terms of design. That means it's a two-in-one device that can be folded into a clamshell, tent, stand, or tablet mode. In terms of inclusions, there are clear USB-C ports on either side of the body. On the left-hand edge, the company has that coupled with a 3.5mm audio jack. The right-hand side appears to hold an SD slot.

The image shared by the company also showcases the gadget in a bright red coloration, down to the keyboard and touchpad. A top-facing front camera can be seen above the keys, just as in the above-mentioned late-model Samsung Chromebook Plus. That does seem to have a slightly larger housing this time, suggesting it will be a somewhat better external snapper when the device is in tablet mode.

What details is Samsung providing about the new Galaxy Chromebook?

With regard to the details Samsung has revealed for its Galaxy Chromebook at CES, those are decidedly few and far between. The South Korean tech giant does reveal that it's the most premium Chromebook it has released to-date. But it has also indicated, as shown in the images, that it will ship with a dockable S Pen stylus just like its counterparts.

That's despite that this will also be the thinnest and possibly the lightest Chromebook Samsung has ever released, according to the company.

The central focal point for the device is, of course, productivity and entertainment. That follows closely in line with the company's smartphones bearing the same branding and is less than surprising. However, the company is also indicating that the Samsung Galaxy Chromebook will measure in at 13.3-inches. The display panel will be an AMOLED 4K screen. That could arguably make it one of the best Chromebook screens on the market before it even launches.

While specifics are thin on the ground, it's not going to skimp on performance to make that happen either. Samsung says the Galaxy Chromebook's processor will be powerful enough to handle day-to-day workloads. The battery behind that, the company continues, will be strong enough to last a full day under load without needing to be recharged.

As with the rest of the information provided by Samsung, the launch price of the Galaxy Chromebook hasn't been specified. Samsung's lack of details could be because the company plans to release multiple tiers of its Galaxy Chromebook. Those would presumably pack in different specs, similar to other premium-grade Chromebooks.

Conversely, Samsung may have just not finalized its plans for the Galaxy Chromebook in terms of pricing.

Availability will most likely mirror that of its other Chromebooks. If that's the case, it will be available for purchase effectively worldwide.