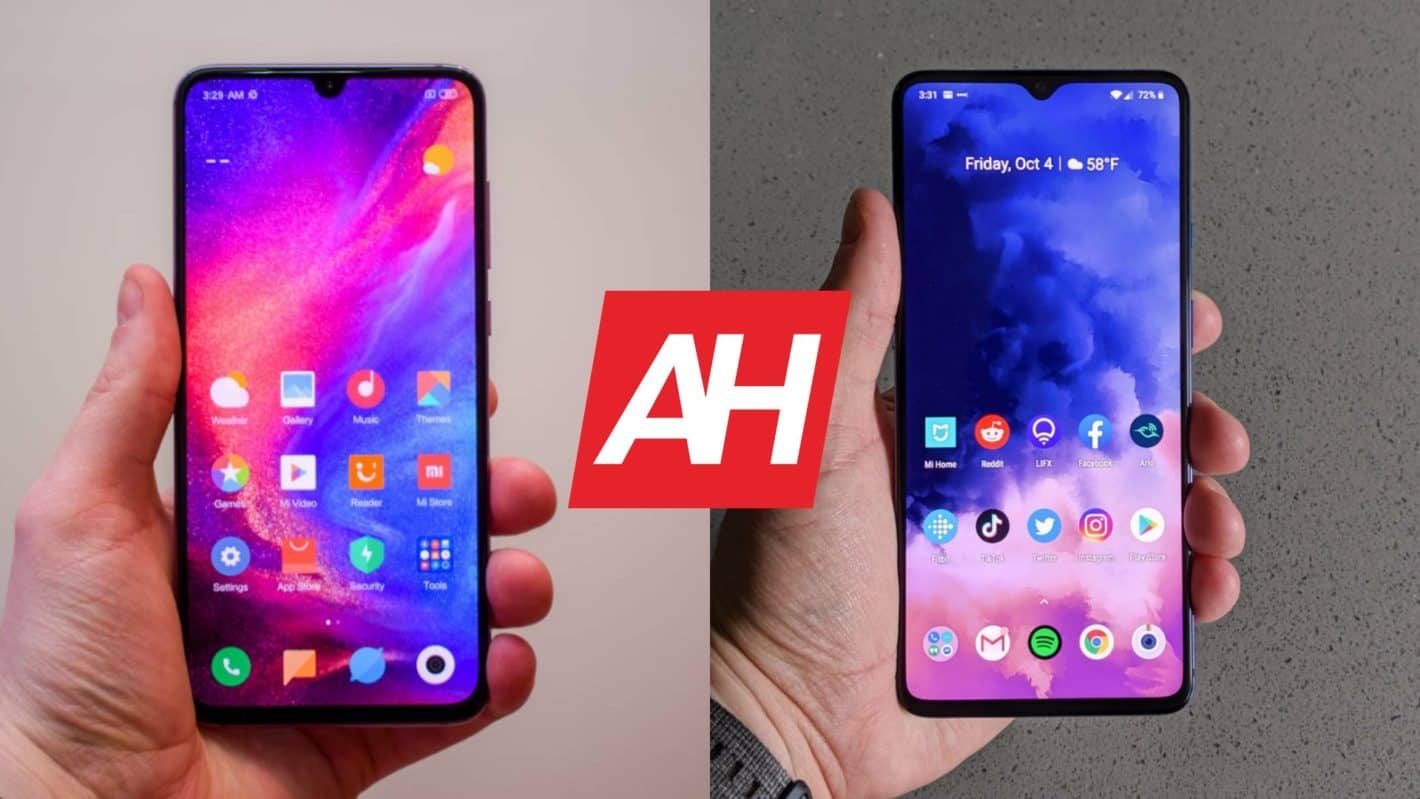 The Xiaomi Mi 9 vs OnePlus 7T comparison is next in line. These two handsets are both great options if you're looking for flagship phones which are a bit more affordable than the competition. In fact, they'd be really solid options even if their price tags were higher, as they can compete with pretty much everything else in the market.

The Xiaomi Mi 9 was announced almost a year ago, back in March. The phone held up really well up until now. The OnePlus 7T is considerably newer, as it was announced in September. The two devices are comparable, though, which is what brings us to this point. Both of these phones are made out of metal, and both have notches, but they don't really have all that much in common.

We'll compare these two phones across a number of categories, as per usual. We'll kick things off with a spec comparison, and then move to design, display, and so on. That's pretty much it for the intro, let's kick off the Xiaomi Mi 9 vs OnePlus 7T comparison, shall we.

In terms of the design, the two phones are not exactly that different. Both phones are made out of metal and glass, while both offer plenty of curves as well. They're both extremely slippery, so that is something you should keep in mind. Very few people will want to use these devices without a case or a skin. They're not huge, but they're not exactly small either, while both offer somewhat tall display aspect ratio. Luckily, their weight is well-distributed, so you'll never feel odd holding them… at least not in that sense.

The Xiaomi Mi 9 offers a dewdrop display notch, while the OnePlus 7T includes a waterdrop one. Both of those are really small, but offer a somewhat different look. These two notches represent the best notch types you can get, basically, as they're the smallest around. Both devices include extremely thin bezels, and have a really thin 'chin' on the bottom. Both devices offer fairly rounded edges, and the same goes for display corners as well.

The Xiaomi Mi 9 and OnePlus 7T both include three cameras on the back. In fact, these two devices have the same main sensor on the back. We'll talk more about that in the camera section. It's worth noting that the Xiaomi Mi 9's cameras are vertically aligned, while the OnePlus 7T's are horizontally aligned. Both include a single camera on the front. That is pretty much it. The two phones are the most similar when it comes to the design, we'd say. Both look great, and have similar characteristics, so we'll end this section in a draw.

On paper, these two phones may seem to be on par in terms of the display, but they're not. The OnePlus 7T has the advantage here for several reasons, even though the Xiaomi Mi 9 has a really good panel as well. Let's get the technical stuff out of the way first. The Xiaomi Mi 9 comes with a 6.39-inch fullHD+ (2340 x 1080) Super AMOLED display. The OnePlus 7T includes a 6.55-inch fullHD+ (2400 x 1080) Fluid AMOLED panel.

Now, the OnePlus 7T's display not only supports higher refresh rate, but also has considerably lower blue light emission stats. That may not seem like much, but it makes the display look sharper than the Mi 9's. The OnePlus 7T has one of the best fullHD+ panels on the market, we'd say, and that's saying a lot. This display even beats out a lot of QHD+ panels in various technical tests, it's that good. This round goes to OnePlus.

In terms of performance, both of these devices are great. The Xiaomi Mi 9 did not slow down at all since launch, while the OnePlus 7T is one of the fastest phones around in general. Both phones are equipped with extremely fast SoCs, the Snapdragon 855 and Snapdragon 855+, respectively. The Snapdragon 855+ has an advantage when it comes to gaming, but the two chips are quite similar.

Both devices also include plenty of RAM. The Xiaomi Mi 9 comes in 6GB and 8GB RAM flavors, while the OnePlus 7T has 8GB of RAM. Both include LPDDR4X RAM, by the way. The OnePlus 7T has an advantage when it comes to storage, as it includes UFS 3.0 storage, compared to UFS 2.1 inside the Mi 9. That basically means that the OnePlus 7T is more future proof, and can transfer data much faster. You won't notice the difference in regular usage, though, so don't worry about it.

Both phones will fly through everything you throw at them. Neither phone showed signs of lag, or anything of the sort while we were testing them. The Mi 9 did hiccup a bit more than the 7T, but that is almost negligible. The OnePlus 7T did feel faster thanks to that super-smooth display, but both phones are really great in terms of performance. The OnePlus 7T wins this category by one small step.

The Xiaomi Mi 9 comes with a 3,300mAh battery, while the OnePlus 7T includes a 3,800mAh unit. Neither of those batteries seem great in size compared to the display size on these two phones. Still, battery capacity isn't everything, right? Well, yes, if proper optimizations are in place, especially on the software side.

The Xiaomi Mi 9 will be able to provide you with 5-5.5 hours of screen-on-time, while the OnePlus 7T will be able to go well above 6 hours without a problem. At least that's our experience. The Mi 9 did manage to cross the 6-hour mark on occasion as well. All in all, though, the OnePlus 7T provides more in terms of sheer battery endurance.

Both the Xiaomi Mi 9 and OnePlus 7T includes three cameras on the back. The Mi 9's cameras are vertically aligned, while the OnePlus 7T's offer horizontal alignment. These two phones even have the same main sensor on the back, Sony's IMX586 48-megapixel sensor. The OnePlus 7T's lens aperture is a bit different, though, f/1.6 compared to f/1.8 on the Mi 9. The other two cameras on both phones are telephoto and ultra-wide shooters, which is kind of a standard these days.

So, what are the results? Well, both phones are quite capable in this regard. Neither of them is the best in the class, but they're both really good. The OnePlus 7T does tend to provide slightly better results across the board. Color reproduction in its daylight images seem to be a bit better, while both phones are on the same level as far as dynamic range is concerned. The OnePlus 7T does have an upper hand in macro photography, though, as it includes a special motor for macro photography.

The OnePlus 7T's ultrawide camera also yields slightly better results, with more detail and sharpness. Telephoto results are quite similar, and they both offer 2x optical zoom, by the way. In terms of low light photography, the OnePlus 7T takes the cake. Its images provide more details and less noise, they look better overall in most cases. The OnePlus 7T offers a better camera setup overall, though the Xiaomi Mi 9 is really good as well.

What about audio? Well, you won't find a 3.5mm headphone jack on either of these devices, just to get that out of the way. You do have an option to hook up Type-C headphones, use a dongle for a 3.5mm port, or simply use Bluetooth headphones. That being said, sound through both that Type-C port and via Bluetooth headphones is really good, as long as those headphones are good enough, of course.

They both provide quite compelling sounds through a decent pair of headphones. There's not much difference here, except the fact that mids are a bit better on the OnePlus 7T. One big minus for the Xiaomi Mi 9 is the lack of stereo speakers. The phone has a single, bottom-facing speaker. That speaker is quite loud and sharp, but you'll notice the lack of a secondary speaker. The OnePlus 7T definitely offers a better sound overall, and it has that secondary speaker in its earpiece. You'll be quite content with the stereo setup on the OnePlus 7T, which is one of the main reasons it wins in this category as well.

Based on the 'winner' tag in the vast majority of these categories, you'd assume that the OnePlus 7T mopped the floor with the Mi 9. Well, that's not true, the Mi 9 is a really good phone, but in most of these categories it's a bit behind the OnePlus 7T. The Mi 9 is a more affordable phone, and that is something you need to keep in mind. If you're looking to save some extra cash, the Mi 9 will serve you really well.

The OnePlus 7T does have an advantage in pretty much every way, though. OnePlus made a really great phone in the 7T, and it also comes with the right price tag. It has a better display with higher refresh rate, a better camera setup, better battery, and so on. It's a great package overall, and it definitely wins this comparison.