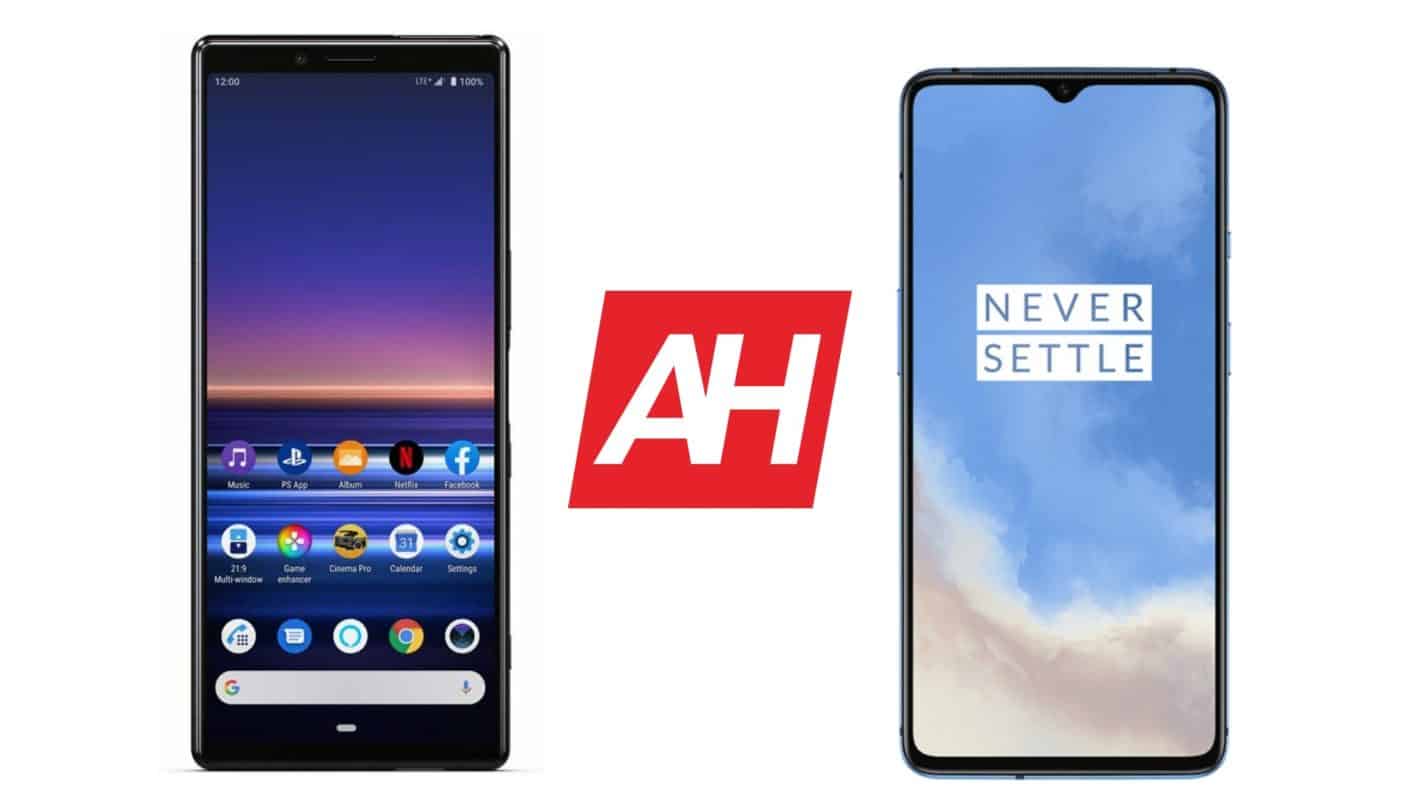 It’s time for the Sony Xperia 1 vs OnePlus 7T comparison. These two smartphones are both high-end offerings from their respective OEMs. The Xperia 1 has been out in the market for quite some time now, and we’ve already compared the OnePlus 7T and Xperia 5.

The Xperia 1 is a more powerful iteration of the Xperia 5, so it seems right to compare it to the OnePlus 7T. This phone is still Sony’s flagship handset. These two phones are fueled by very similar processors, but they do not have that much in common overall.

Both phones are made out of metal and glass, but Sony’s and OnePlus’ approach to design is not that similar. Both phones have a lot to offer, though, so it will be interesting to see how they compare. Let’s pit the Sony Xperia 1 vs OnePlus 7T, shall we.

Both of these phones are made out of metal and glass. Still, the final product is quite different. Both are extremely slippery, which is worth noting. The Xperia 1 is considerably taller, and considerably narrower than the OnePlus 7T. That is mainly due to its thick top and bottom bezels, and its high display aspect ratio. The Xperia 1 ships with a 21:9 aspect ratio, compared to a 20:9 one on the OnePlus 7T.

Both of these displays can provide you with great image quality, no doubt about that. Both displays produce really contrasty images, deep blacks, and overall quality picture. In fact, both support HDR playback as well. Both of these panels are protected by Gorilla Glass, the Xperia 1’s with Gorilla Glass 6, while the 5th iteration of Corning’s protection has been applied on the OnePlus 7T.

The Xperia 1 can produce a considerably sharper image, but that’s not something you’ll easily notice in your day-to-day usage. The Xperia 1 cranks up its full resolution only if you’re watching 4K content. Besides, OnePlus managed to reduce blue light emission from the 7T’s panel a lot, so the display looks stunning, despite it’s “only” a fullHD+ panel. That’s not all, the OnePlus 7T’s panel offers higher refresh rate.

The Xperia 1’s panel comes with your regular 60Hz refresh rate, while the OnePlus 7T amps that up to 90Hz. Because of that, everything you do on that display will seem more fluid. To be quite honest, we’ve enjoyed using the 7T’s panel more than the Xperia 1’s, and due to OnePlus’ tweaks on this display, and its higher refresh rate, we’ll call this a tie.

In terms of performance, both of these phones are quite great. Performance on either is nothing to scoff at. The OnePlus 7T does come with a slightly more powerful SoC, the Snapdragon 855 Plus. The Xperia 1 is equipped with the Snapdragon 855. The OnePlus 7T also includes more RAM, 8GB compared to 6GB. On top of everything, OnePlus’ flagship also sports UFS 3.0 flash storage, which is much faster than the Xperia 1’s UFS 2.1 flash storage.

The numbers are on the OnePlus 7T’s side, but the Xperia 1 keeps up the pace when it comes to performance. We did not experience any significant issues with the device, that goes for both day-to-day performance, and gaming. Truth be said, the OnePlus 7T did feel a tad faster, not only due to its software and hardware, but due to its high refresh rate display

So, even though the Xperia 1 is extremely close to the OnePlus 7T in this category, we’ll go with OnePlus’ offering. OnePlus really managed to optimize OxygenOS quite a bit. The Xperia 1 will hiccup from time to time, and that’s something that we did not experience on the OnePlus 7T. The OnePlus 7T is also more future proof in the performance department, due to more powerful internals.

In terms of battery life, well, the OnePlus 7T has the upper hand. OnePlus included a considerably larger battery in its phone, than Sony did in the Xperia 1. The two phones have almost the same display size, and both are fullHD+ OLED panels. Their SoCs are quite similar in terms of battery drain as well, so those battery sizes and software optimization play a huge role here.

The Xperia 1 includes a 3,330mAh battery, which does seem a bit on the smaller side for a 6.5-inch display. OnePlus opted to include a 3,800mAh unit in the OnePlus 7T. The OnePlus 7T managed to get over the 6-hour screen-on-time mark for us, pretty much consistently. On most occasions, we were able to push it past the 7-hour mark as well. The Xperia 1 does not offer such battery life.

If great camera performance is what you’re looking for, well, it’s worth saying that both of these phones are quite good in that regard. Neither of them is best in the business, but both are really good. Both of these phones include three cameras on the back, and a single one on the front. Those cameras are considerably different in comparison, though.

Both devices can provide you with really detailed images during the daytime. If there’s ample amount of light in a shot, both will do a great job, with punchy colors, lots of detail, and great dynamic range. Both are fairly good on cloudy days as well. For macro shots, the OnePlus 7T has the upper hand, as it comes with a dedicated motor for macro photography. Results are really impressive, and it will allow you to get much closer to your subject than the Xperia 1.

As far as low light performance is concerned, well, they’re both fairly good. Neither of the two phones will bring up as much light as the Pixel 4, but that may not be a bad thing. Images in low light, when these two phones are concerned, look much more natural. Both phones can let it quite a bit of light into an image, and capture more than decent shots. These two phones are more or less on the same playing field in terms of camera performance, so we’ll call this a tie.

Both the Xperia 1 and OnePlus 7T offer stereo speakers Those speakers are really good in both instances. Both phones offer Dolby Atmos sound support, and audio from their speakers is quite clear. Distortion is quite minimal on high volumes, but that is to be expected. The main speaker is placed on the bottom in both instances.

Neither of these two phones includes a 3.5mm headphone jack. You’ll either have to opt for a Type-C port, or Bluetooth audio connection. We did not really notice a major difference in sound output via headphones either. Both phones are up to par in that regard, which is a really good thing. All you need is a quality pair of headphones in order to enjoy rather good audio output here.

The OnePlus 7T is the winner of this comparison. OnePlus’ handset managed to win in the performance and battery departments, while in all other aspects, these two phones were up to par. Truth be said, both devices are really great, and you cannot go wrong either way. We did see some advantages for the OnePlus 7T, but if you prefer taller devices, and prefer Sony’s software, the Xperia 1 is more than a solid choice.