These renders come from 91mobiles, and they’re following the Moto G8 which surfaced yesterday, from the same source. It is also worth noting that the Moto G8 Power specifications surfaced as well, in addition to renders, courtesy of XDA Developers.

Let’s talk about these renders first, shall we. If you take a look at the gallery below this paragraph, you’ll see the Moto G8 Power. As you can see, it resembles the Moto G8 quite a bit.

This phone is made out of metal and glass or metal and plastic, while it comes with rather thin bezels. It has a ‘chin’ below the display, and a display camera hole in the top-left corner.

All of its physical keys are placed on the right, while the phone includes four cameras on the back. Motorola’s logo is placed on the back as well, and it will allegedly double as a fingerprint scanner.

The phone will be available in both black and blue variants, both of which are shown in the provided gallery. The phone will also include a headphone jack on the bottom.

The Moto G8 Power will feature a 6.36-inch fullHD+ display, along with 4GB of RAM and 64GB of storage. A 5,000mAh battery will also be included, along with 18W wired charging. Android 10 will come pre-installed on this phone.

The Snapdragon 665 will fuel the Moto G8 Power, while a 25-megapixel selfie camera will be included. 16-megapixel (f/1.7 aperture), 2-megapixel (f/2.2 aperture, macro lens), and two 8-megapixel cameras (one of which will include a wide-angle lens) will sit on the back of this phone.

The device will include two SIM card slots in some regions. The Moto G8 Power will be 167.99mm tall, and 75.8mm wide. We don’t know how much will it weigh.

Another Motorola-branded phone surfaced, and it’s shown below this paragraph. This is actually the same device that Evan Blass shared a couple of days ago. 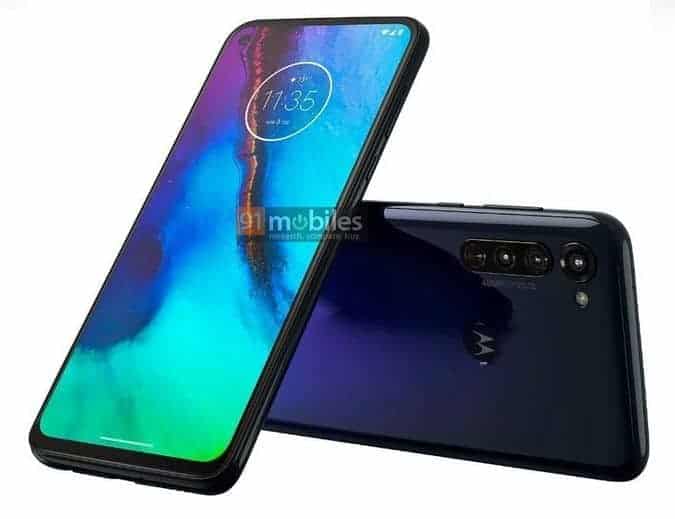 This phone comes with a stylus, and contrary to what people are saying, this is probably not the company’s flagship. Some rumors suggested this is the Motorola Edge+, but even Evan Blass said that’s unlikely.

This phone actually resembles the Moto G8 Power quite a bit, but it includes a stylus. It has a very similar-looking camera setup on the back, a rear-facing fingerprint scanner, and a display camera hole.

This handset will include a 48-megapixel main camera, while Android 10 will come pre-installed on it. Other than that, we don’t have any information yet. We also do not know when either of these two phones will launch, but they’re expected to arrive soon.