JBL isn’t really the name you think of when it comes to gaming audio, but the company is trying to change that with its JBL Quantum lineup.

At CES this week JBL announced the new gaming-focused range of products, which feature various models of headphones and a set of desktop speakers.

And surprise, most of the products come with RGB lighting so you can spice up your setup a little bit. JBL is catering to every budget too. There are seven headsets in the new gaming series of offerings in addition to the speaker set.

Gaming headsets span a wide range of price points and appeal to various groups of consumers. JBL is attempting to hit all of those by offering seven different headsets.

Whether you’re looking for something simple just to have a pair of headphones, or something lavish that has all the bells and whistles, JBL seems to have you covered. 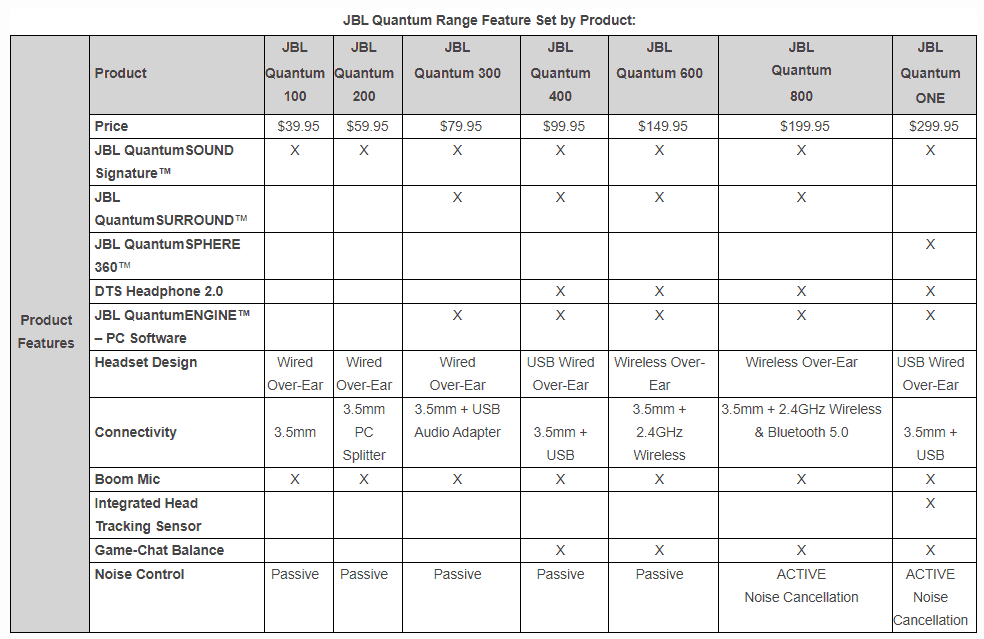 Keep in mind that going with the most basic option will also provide the most basic audio. The JBL 100 connect through 3.5mm audio ports and are an over-the-ear style, but you tend to get what you pay for. That isn’t to say these will have terrible audio quality. Just that they won’t have any extra features like surround sound.

And if you want more immersive gaming audio you’ll probably want to splurge a little. That doesn’t mean you have to go for the most expensive option. Remember JBL is launching seven headsets in the Quantum line, and some of them are still fairly affordable.

All seven headsets are multi-platform too, with compatibility for PC gaming, PlayStation 4, Xbox One, Nintendo Switch, mobile, and VR hardware.

Not a headset person? Go for the JBL Quantum DUO

Not everyone likes wearing headsets when they play games. Yes, they’re generally a mandatory thing if you’re playing games with others where team communication is important.

But for anyone who tends to stick to single player games or avoid team communication, a good set of speakers is all you need. Enter the JBL Quantum DUO.

This is JBL’s PC gaming speaker that the company says will offer immersive sound, allowing players to “pinpoint incoming fire or hear enemies creeping up on them from behind.”

It also features the same lighting as some of the headsets with the ability to “visualize the beat,” which probably means the lights will react to the audio of your games at various moments. The JBL Quantum DUO will retail for $199, and will be available in April of this year along with all of the Quantum headsets.