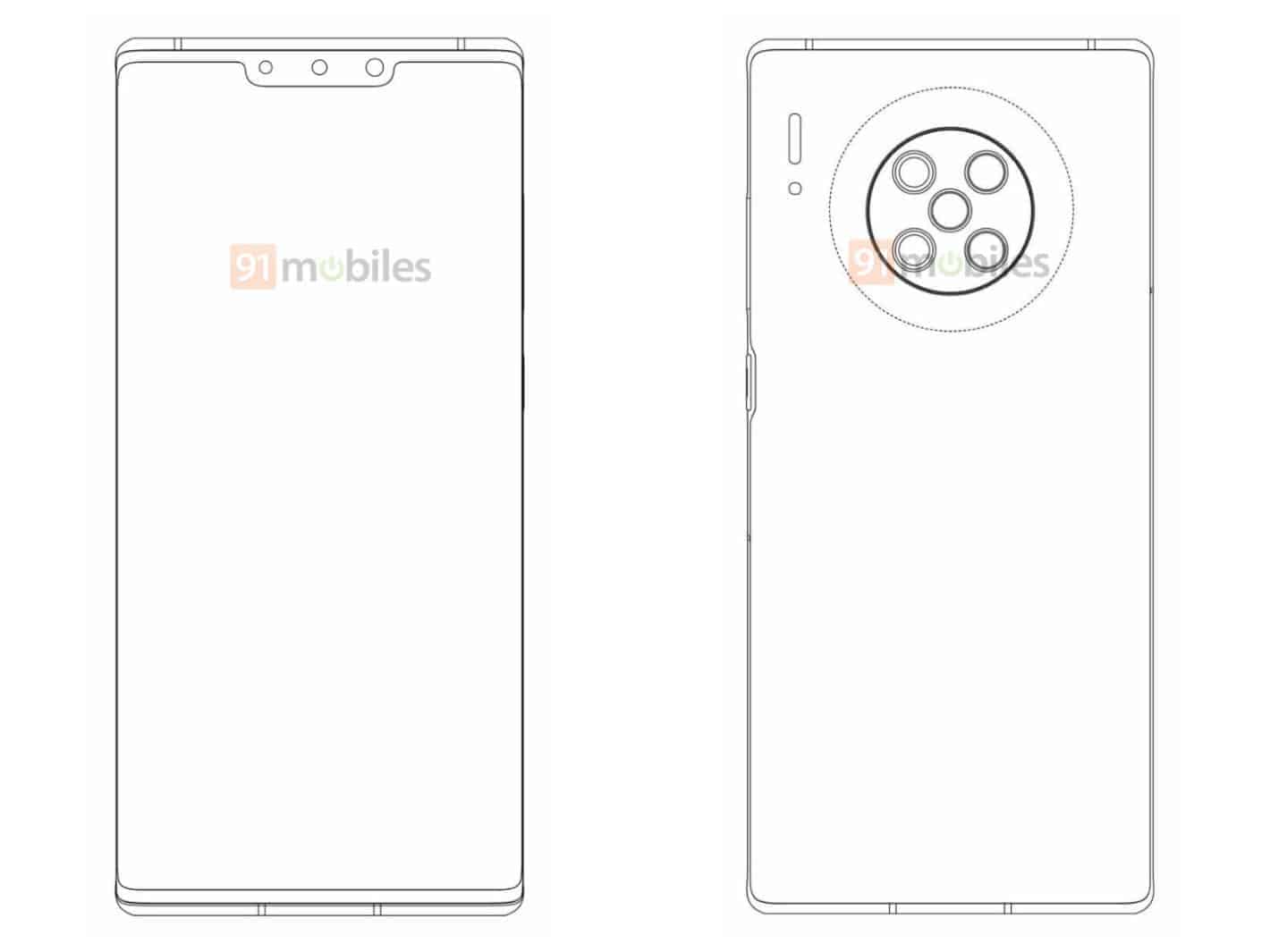 The Huawei P40 series hasn’t launched just yet, and yet we already have some Mate 40 series info to share. A new piece of information surfaced, claiming that the Huawei Mate 40 Pro will include eight cameras overall.

This information comes from 91mobiles, and it is based on a design patent. This is a rather ‘out there’ conclusion based on a patent, but it makes sense, actually.

If you take a look at the provided images below, you’ll see a phone that resembles the Huawei Mate 30 Pro quite a bit. Based on these sketches this phone looks like the Mate 30 Pro with two extra cameras.

You will notice that an extra camera has been crammed on the back, in the middle of the existing four. An additional camera has also been added on the front, inside the notch.

This patent has been filed by Huawei with the German patent agency called ‘DPMA’, reports the source. That patent does not mention the ‘Mate 40 Pro’ or ‘Mate 40’ for that matter. So, we can only guess at this point.

Truth be said, we would have probably never mentioned this patent, if the provided device was not so similar to the Mate 30 Pro. It does seem like either the Mate 40 Pro, or a new version of the Mate 30 Pro. The former is more probable.

The Huawei Mate 30 Pro was announced back in September. It was released in China, but due to the US ban, it did not really make it to a lot of markets around the world. Well, it did not reach them just yet.

Huawei is planning to release its very own alternatives for GMS soon, probably with the Huawei P40 series as the first devices to feature it. With HMS, Huawei will have an alternative for Google’s apps and services to offer to its consumers.

That way, the company will be able to offer its new smartphones in a whole lot more markets. That includes both Europe and India. The Huawei P40 series will probably be the devices that debut HMS in global markets, but the Mate 40 series will continue the trend. All that under the assumption that the US ban will still be in place, and Huawei won’t be able to use GMS, of course.

The Huawei Mate 40 Pro, if this is its patent, will resemble the Mate 30 Pro quite a bit. You can expect it to sport a curved display, and be made out of metal and glass.

The Huawei Mate 40 Pro will include two extra cameras, eight overall, and while the notch will still be there, it will be fairly thin. Leica’s lenses will almost certainly be a part of the device as well.

If everything goes according to plan, the Huawei Mate 40 series will become official in Q3 2020. The Mate 40 and 40 Pro will probably launch, and we’ll guess they’ll arrive in September. It is possible that Huawei may push their release date to October or November, though.