Editor's Note: Spoilers ahead for the Terminator mission in Ghost Recon Breakpoint

Ghost Recon Breakpoint launched its first-ever live event yesterday featuring the Terminator event mission. And it's live on all platforms at the same time including Stadia.

The event is stretched across two parts, one of which started on January 29, and another which starts on February 1.

Each part of the event includes a special mission, too. Which you will want to complete if you want your chance at acquiring some unique items that could be useful during other parts of the game.

Completing the mission isn't too difficult if you know where to start. And while the mission may be a bit of a challenge at first (it's been giving me some trouble my first couple attempts), it's easy enough if you stick it out.

If you're unsure how to begin the Terminator mission in Ghost Recon Breakpoint this guide is here to help. In fact getting to it is rather quite easy. Keep in mind that the live event only sticks around till February 6, so finish it while you can for the exclusive rewards and gear.

Where to begin the Terminator mission in Ghost Recon Breakpoint 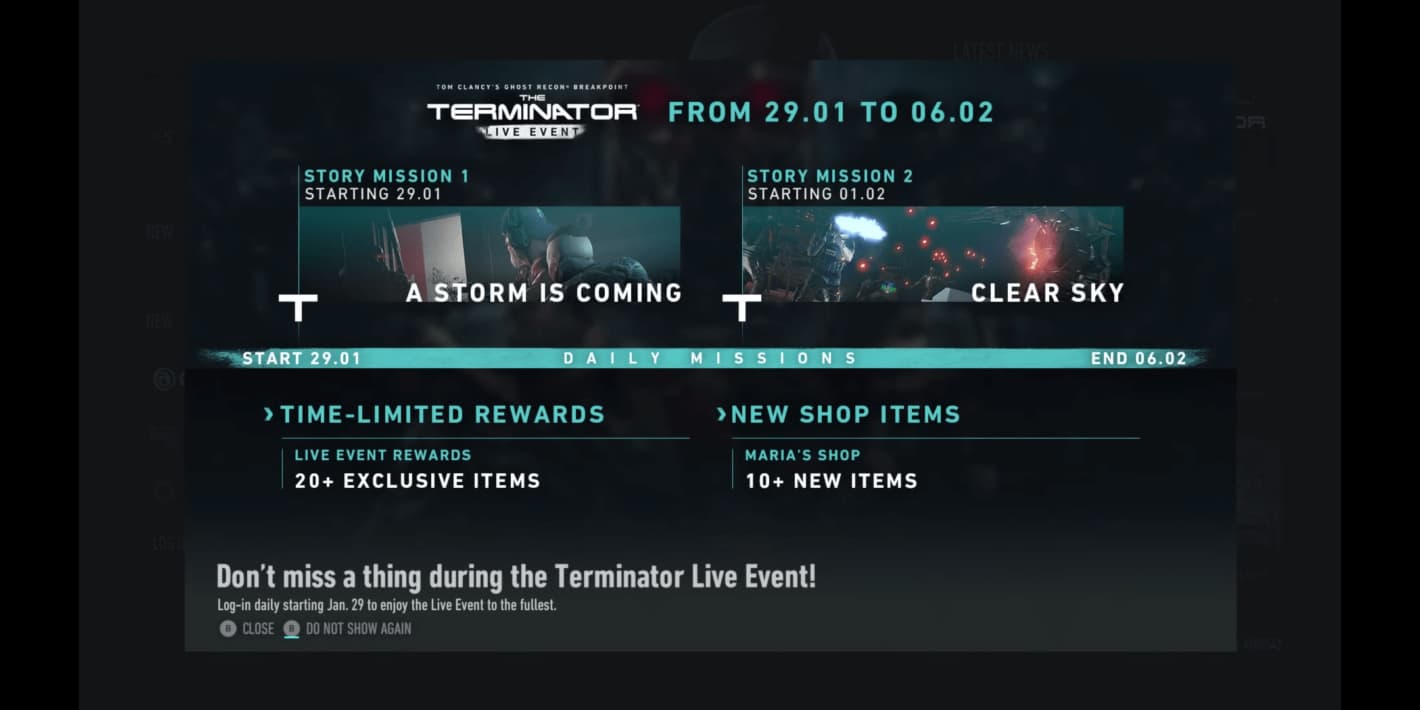 For starters, you'll need to head to Erewhon and talk to Maria at the shop. She will tell you about a "protector" who was arrested for shooting down some drones to protect homesteaders.

After you finish the conversation with Maria the location you need to investigate will pop up on the map. It should automatically pin to the map as well, unless you already have the max amount of things pinned.

In which case, open the menu and unpin something from the Objectives tab, then navigate to the right part of the Objective board to find and select the Terminator mission. Simply hover over it and pin it.

That should then allow you to see the highlighted point on the map (and mini map) for where you need to go. And since everything in this game as far as objectives and missions goes is color coded, it'll be even easier to spot.

Use the helicopter to fly to the Sentinel Corp. Base

After starting your mission you'll figure out that the first clue you have to the "protector's" whereabouts are at the Sentinel Corp. base.

If you leave Erewhon proper, that is through the main entrance that you came in at when you first arrive there, you can hop in the helicopter and fly to the base, landing somewhere nearby and within walking distance.

This will be a whole lot faster than running or driving. Though, if you like to explore the landscape (and why wouldn't you? It's HUGE with tons of cool stuff to see!) you can take either of those modes of transportation.

If you take the helicopter, land outside of the base somewhere that makes the vehicle easy to get to. Place a beacon on it so you can get back to it easily if needed, and then proceed to head towards the base.

The missions instructions inform you that either documents found within the base or commanders may have the intel you want on the mystery person. Seek out either of these to progress the mission.

Once you move past this step, it'll tell you to look elsewhere as the prisoner will be verified as having already been moved.

Inside the base there are now two new buildings you will need to investigate to find where to go next and progress the mission.

There's no foolproof way to get inside completely unseen as you will eventually have to encounter someone. You can however minimize the amount of enemy encounters you have to deal with.

For starters, it's a good idea to begin searching the building that is at the northernmost tip of the base. There is a ladder you can climb up that will allow you easy access to the roof and once there, you can slip in mostly unnoticed through an open skylight.

Here is where it gets a tad tricky. To get to the ladder you will first need to slip by some roaming guards. If you take your time watching the patrols with your recon drone, you can gauge how much time you'll need.

You can get into the base through an open doorway alongside the Northwest wall. That is if you're not already inside. You can easily get to this doorway if you simply fast travel back to Erewhon first, then fly back with the helicopter and land near it.

This not only allows you to restock on ammo if you need to, but you can also restock your sync shot drones. Which brings us to the next point. Take out any snipers or rooftop guards.

Snipers are never fun to deal with if you're trying to minimize combat engagement. This is where the sync shot drones come in handy.

You can use the drones to pick them off one by one. But you're limited to holding five in your inventory, so you can't just sit back and take out every guard.

Take your time, focus on the ones on rooftops. Then you can time your way to the ladder to get inside the building.

Realistically, you really only need to take out the one sniper in the tower near the building you're going into, and the one rooftop guard that is next to that building.

Once you get through this first building, you can always fast travel back Erewhon and stock up on more sync shot drones before moving to the next step.

Yes, this involves a lot more travel time, but it makes things a breeze. If you prefer the challenge of battling anyone you come across, by all means do so.

Once you climb the ladder and are able to get onto the roof of the northwest office building, either jump straight down in through the skylight, or safely check to see if there are any guards inside first.

You can check using your recon drone again and if it's safe, drop down and proceed to move to the checkpoint while taking out any enemies you need to along the way.

Intercept the convoy that patrols around Smuggler Coves 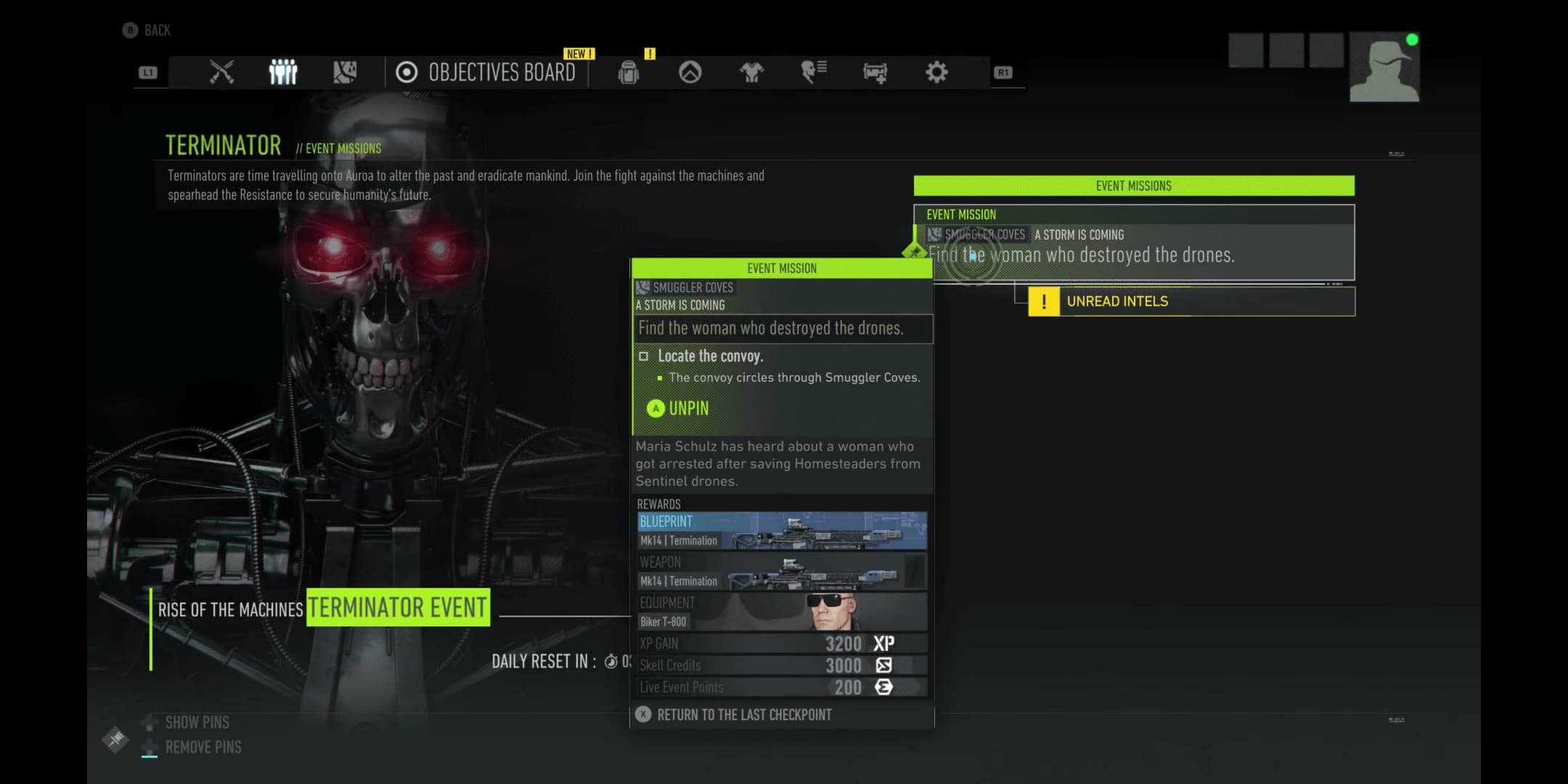 After infiltrating the Sentinel Corp. base and finding the intel you needed, you'll discover that the prisoner is potentially being transported to a new location.

You'll need to find the convoy that's supposed to be doing the transport and interrogate one of the guards. Be a tad cautious here as the convoy patrol route will occasionally pass other guards.

It always travels along the same route, but it's a fairly long one. So if you miss it then you'll have to cut it off somewhere further along the route. You could also wait for it to come back around again.

There are some spots along the route where the convoy will more or less be on their own. Leaving you to intercept it without much opposition.

It has two vehicles, one heavily armored truck, and one SUV. It doesn't matter which guard from which vehicle you interrogate. You only need one of them, so kill the rest.

I found it easiest to shoot one of the vehicles which should get them both to stop temporarily. From here you can pop one or two of the tires on each vehicle. Then take out three guards and if the last one fights back, simply shoot his leg a few times until he drops. Don't kill him though.

Run up, grab him, then interrogate him to find out that the prisoner has now been taken to the emergency center. You now have your next location.

Head to the emergency center in Smuggler Coves

Since you're already in Smuggler Coves, it's a short trip to the emergency center where you need to go next.

You could also take this time to fast travel back to Erewhon again and stock up on anything you need. Whatever you decide, once you're ready head to the emergency center to find intel.

You can find this out by checking laptops, or by interrogating specific people. Keep in mind that this is an emergency center, and there will be other civilians inside. So avoid accidentally killing any of the doctors or non-hostiles.

If you're looking for an easy point of entry, there's an unlocked door on the northwest side of the building that can be reached by walking up a flight of stairs. Be careful of the guard that patrols near this door.

Before trying to enter, take out the two guards at the nearby helipad first. Killing them doesn't seem to alert the two by the door.

This will alert the other guards around the entire area. So wait for things to cool down out of the red before heading inside.

Search the room inside the second building for the prisoner

Once inside the building, head upstairs and find the room with a guard in front of it. It'll be hard to miss as the prisoner (Rasa Aldwin) will be yelling through the door at the guard. Take out the guard then enter the room.

You'll go through a brief cutscene here, at which point you finally come into first contact with the T-800 model Terminator. When the cutscene finishes the mission will update and you'll need to now fall back.

Fall back and escort Rasa to her workshop

Rasa says she has a place to escape to (her workshop) and this will be marked on the map and mini map. You'll need to fight your way out of the emergency center building and make it to the marker.

Once you get far enough away your alert status should change. From here just run to the marker. Once you get there you'll be met with a little bit of opposition. Clear out the enemies before you proceed.

Once inside the workshop you'll enter another cutscene. In it, Rasa will hand you a weapon called the MK14 Termination. This is a marksman weapon that was designed to kill Terminators by piercing their weak points.

At this point the event mission for the Terminator live event is over. It will continue on February 1 when part 2 starts though. So it doesn't hurt to be prepared.

Now that the main Terminator event mission is over, you have new missions that are part of the event. These are called Interceptions, which will have you hunting down T-800 model Terminators. Completing these will allow you to acquire special materials. You can then use these to upgrade the rifle Rasa just gave you.

They'll also increase your tier for the live event pass which you will need to redeem the even-specific rewards.

So it's recommended that you do these before completing the second part of the mission that shows up. Once you have the necessary parts, you can upgrade the rifle at Maria's shop Erewhon.

You'll need to talk to Rasa here to start each Interception. Lastly, completing this part of the Terminator event mission will also give you a handful of new rewards. You can acquire these from the objectives tab.

And that's it! The first part of the Terminator mission in Ghost Recon Breakpoint is done. Be sure to check out out other guide on completing part 2 once it launches.