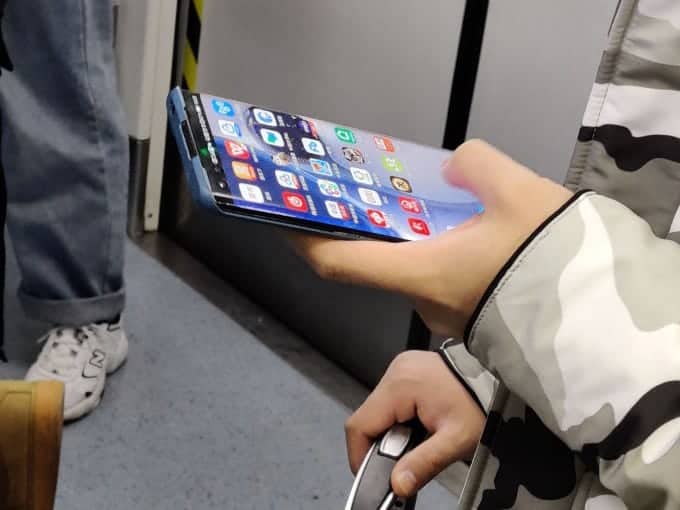 The Huawei P40 Pro will become official at the end of March, and some real-life images of this smartphone have leaked. Do note that this seems to be the P40 Pro, but this is just a leak, so it’s possible it’s fake.

In any case, these images have been published via Weibo, by ‘Digital Chat’. Do note that the original post has been deleted, though. We’ve seen a number of leaks from that source before, so the source itself is not new, which gives some credibility to this leak.

In any case, if you take a look at the gallery below, you’ll be able to see two images attached. This mysterious device is running EMUI, and it does seem to be the company’s upcoming P40 Pro smartphone.

The device has really thin bezels, a curved display, and is covered by a case that is meant to hide most of its design. You can see that pill-shaped camera hole in one of these Huawei P40 Pro real-life images.

The status bar on this phone is set to black, for one reason or the other, but it’s probably to further hide the phone’s design. These images were obviously taken in a subway, or something of the sort. The person using the phone was not aware they're on camera, at least it looks like that.

You will also notice that this case is made especially to hide this particular phone’s design, as the back of it hides the camera module completely.

We’ve exclusively shared some renders of the Huawei P40 Pro quite recently. Thanks to that, you can check out most of the phone’s design.

The Huawei P40 Pro will be made out of metal and glass. A special edition ceramic variant will become available as well. The phone will include a curved display, and that pill-shaped camera cutout.

A periscope-style camera is included in the package

It will feature quite a few cameras on the back, along with a dual-LED flash. A periscope-style camera will be a part of the offering as well, and the back side of the phone will be curved.

All the physical buttons will be placed on the right-hand side of the phone. A 3.5mm headphone jack will not be included, while the phone will almost certainly be IP68 certified.

The Huawei P40 Pro will be fueled by the Kirin 990 64-bit octa-core processor. Chances are we’ll see both 4G and 5G variants of this phone, but a 5G model is coming for sure.

The Huawei P40 Pro will be announced with its sibling, the P40, on March 24. Huawei will host a separate event for those two phones, though we may see some additional hardware.