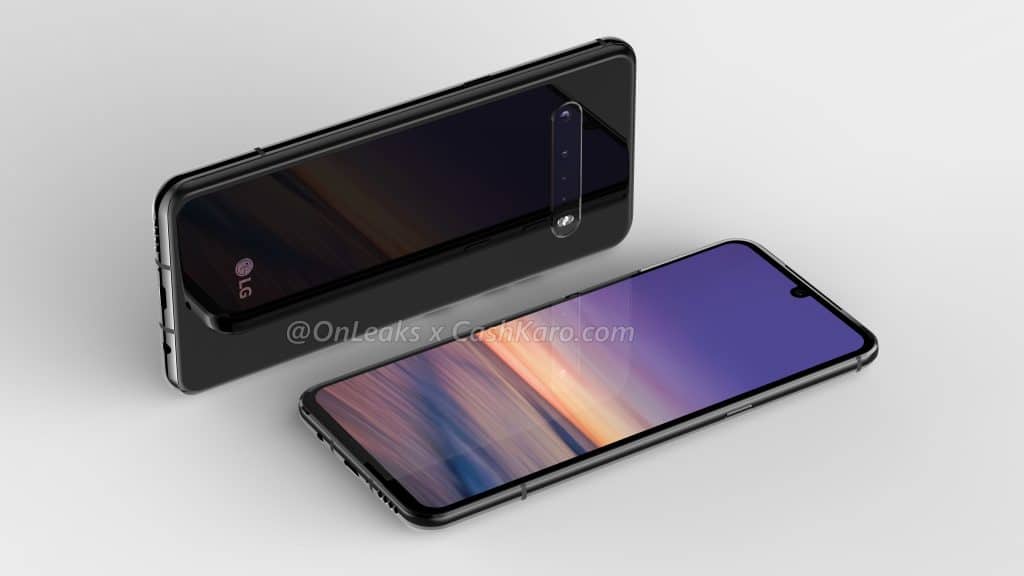 OnLeaks and CashKaro have now teamed up to bring us some CAD-based LG G9 images. Interestingly enough, the source did not include 'ThinQ' branding, even though it will probably be a part of the final product. Looking at the LG G9 renders, the phone doesn't really seem all that exciting from a design perspective.

If these images accurately depict the phone, it will look like a mash-up of the LG V50 ThinQ and the G8X ThinQ. While that isn't necessarily a bad thing, it's nothing new.

These LG G9 renders don't look all that exciting

According to the images, the phone will have a tiny waterdrop notch on the front. The bezels are quite slim, and with a rumored display of 6.7 to 6.9-inches, the screen-to-body ratio will likely be pretty high.

Per a previous report, this will be a 4K screen. The phone will supposedly have the sound on display technology too.

Since the notch of the smartphone is quite small, it doesn't seem like it will be packing in the sensors for Air Motion and Hand ID. And apparently the lack of these components is the reason why the phone looks quite slim.

The handset seems devoid of any physical fingerprint scanner, which means it will be beneath the screen.  The display itself looks flat, and that makes the handset pale in comparison to phones touting waterfall screens.

The images also show the power key, the volume rocker, and the dedicated Android Assistant button. The 3.5mm headphone jack has been retained and can be seen at the bottom, alongside the USB-C charging port and a speaker. It also seems like the phone will have a SIM card slot on top.

The LG G9 renders also seem to imply that the phone will have an all-glass design. There are four cameras on the back, which is a major improvement over the dual-camera LG G8 ThinQ. The snappers have been aligned horizontally and a dual flash unit can also be seen. Camera specs aren't known yet, but we can expect one of the units to be a periscope module. According to rumors, the phone will measure 169.4 x 77.6 x 8.8mm (9.4mm if you count the camera bump).

Specs are still a mystery

Since the LG G8 ThinQ was announced during the Mobile World Congress 2019, we can expect the LG G9 to arrive in February. LG's smartphone unit has been struggling since the past few years and reports had even suggested that the G series will be discontinued. Of course, that doesn't seem to be the case.

The dilemma with the company's flagships is that although they are pretty decent, they have nothing on competing handsets. As a result, they usually fail to make a mark. The LG G9 renders hint that history will perhaps repeat itself this year.

However, since the specifications of the phone are still largely unknown, there is still hope. The handset will likely have the Qualcomm Snapdragon 865 under the hood, which means it will be 5G-ready. It will also probably ship with Android 10.

Other possible improvements include improved battery life. Beyond that, it's hard to say what LG has in store to make the G9 standout.