This benchmark listing reveals that the device managed to score 717 points in the single-core test. It hit 2,784 points in the multi-core test, on the other hand. These scores could be a bit off, as this may not be the final version of the device.

Geekbench claims the Mi MIX 4 will have 6GB of RAM, at least this variant

This listing reveals that the phone has 6GB of RAM, but the Mi MIX 4 will probably arrive in more than one variant. The device is expected to pack 8GB or 12GB of RAM as well.

Speaking of which, the Mi MIX 4 was expected to launch alongside the Mi MIX Alpha, but that did not happen. The Alpha arrived back in September, as the company’s new concept smartphone.

That device is expensive, and it will be available in limited quantities. The Mi MIX 4, on the other hand, is expected to become a direct successor to the Mi MIX 3. It will be considerably more affordable, and sport a more streamlined design.

The Mi MIX 4 did surface several times thus far, but all those leaks have proven to be fake. We don’t really know what the phone will look like, but we can guess, of course.

The Mi MIX 4 will probably be made out of metal and glass. The device is expected to have really thin bezels, and no display holes or notches. It remains to be seen if it will include a pop-up camera, or not.

The Snapdragon 865 SoC is expected to fuel the device

The Snapdragon 865 will probably fuel the Mi MIX 4, though that processor hasn’t been announced just yet. Qualcomm is expected to introduce it this month, though.

The Mi MIX 4 is also expected to include at least three cameras on the back, and an in-display fingerprint scanner. Stereo speakers are also expected, but not a 3.5mm headphone jack.

The Mi MIX 4 will probably become official in China first, and make its way to other markets after that. The device is rumored to arrive before the end of this month.

We’ve received quite a lot of conflicting information when it comes to the Mi MIX 4, so take what was said with a grain of salt. The device is expected to arrive by the end of December, but it remains to be seen if it will happen or not. 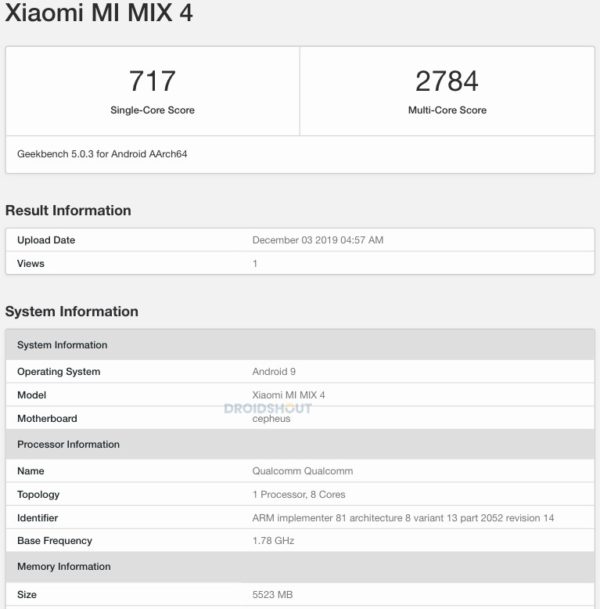