You might be asking yourself “what’s the perfect gift to give this Holiday season?” If that’s the case, we’ve got the answer for you: a Roborock robot vacuum.

Why you might ask? Picture this scene: in 24 hours, your entire family will be at your front door. Mom, dad, siblings and their kids, grandparents and maybe even your eccentric uncle, too. Meanwhile, you’ve still got full bins of laundry, meal prep, fixing the leaky toilet, wrapping all the presents, finishing up the Christmas decorations, and somehow still have to shove vacuuming into that schedule.

Sound familiar? Even if it’s not quite this crazy every year, we’ve all been in a similar situation. Wouldn’t it be nice to not have to worry about one of the biggest time-sinks in modern home life? I’m talking about vacuuming. You know, that annoying thing you have to do every week that takes up at least an hour of your precious time? Even if you only spend 30 minutes a week on vacuuming, that’s at least 25 hours in a year you could have spent doing anything else.

Regardless of whether or not this amount of time seems substantial throughout a year, it’s likely you never look forward to this chore at any given point in time. Wouldn’t the perfect gift seem like something that would give you back more of your time? We certainly think so.

That’s why you should have a robot doing the vacuuming and mopping for you.

While we’re not quite at the stage where Rosie the Robot Maid can do all of your household chores, Roborock makes the finest robot vacuums on the market, and all of Roborock’s models are designed with one goal in mind: to make your life easier. That’s exactly why it’s the perfect gift.

The one you want under the tree 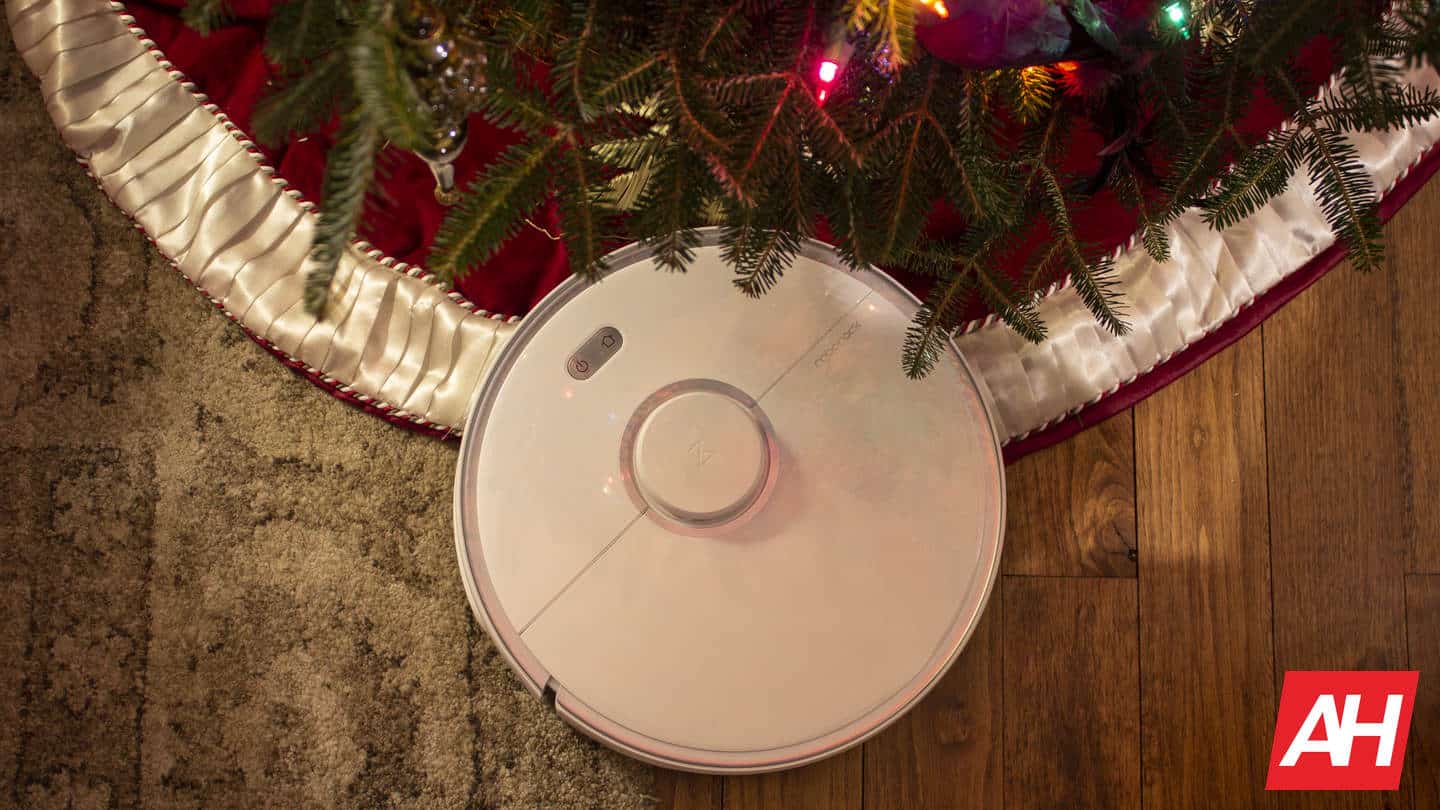 Giving a vacuum for Christmas sounds like a good way to end up in the dog house, but hear me out for a minute. This is more than just a vacuum. In fact, it’s probably one of the coolest pieces of technology you could get right now, and who doesn’t want some cool new piece of technology for the Holidays?

Seriously though, what’s cooler than having your own robot that does your household chores for you? Not much, that’s for sure. And like any good piece of technology (or perfect gift), there’s plenty of awesome things to show off.

How about the fact that you can watch the robot cleaning your house right from the app? That means you can make sure the job is getting done even while you’re at the office. That’s some serious peace of mind when you’ve got big dinner plans with family, or trying to impress that special someone who’s coming over for dinner.

But for now, let’s focus on your family dropping by for extended periods of time. While regular vacuuming might be manageable for just you or your significant other, the mess is an entirely different beast when Uncle Joe and Aunt Marge are over with their messy little dogs. Or how about having the entire extended family over for a few nights for the big unwrapping event?

However you’ve got it scheduled this year, Roborock can help with the touch of a virtual button, or just by asking Alexa to vacuum your home for you. Since Roborock’s smarts can link to Amazon’s Alexa, you don’t even need to open the app to clean your house. All you have to do is ask your house to clean itself!

Now that’s living in the future. 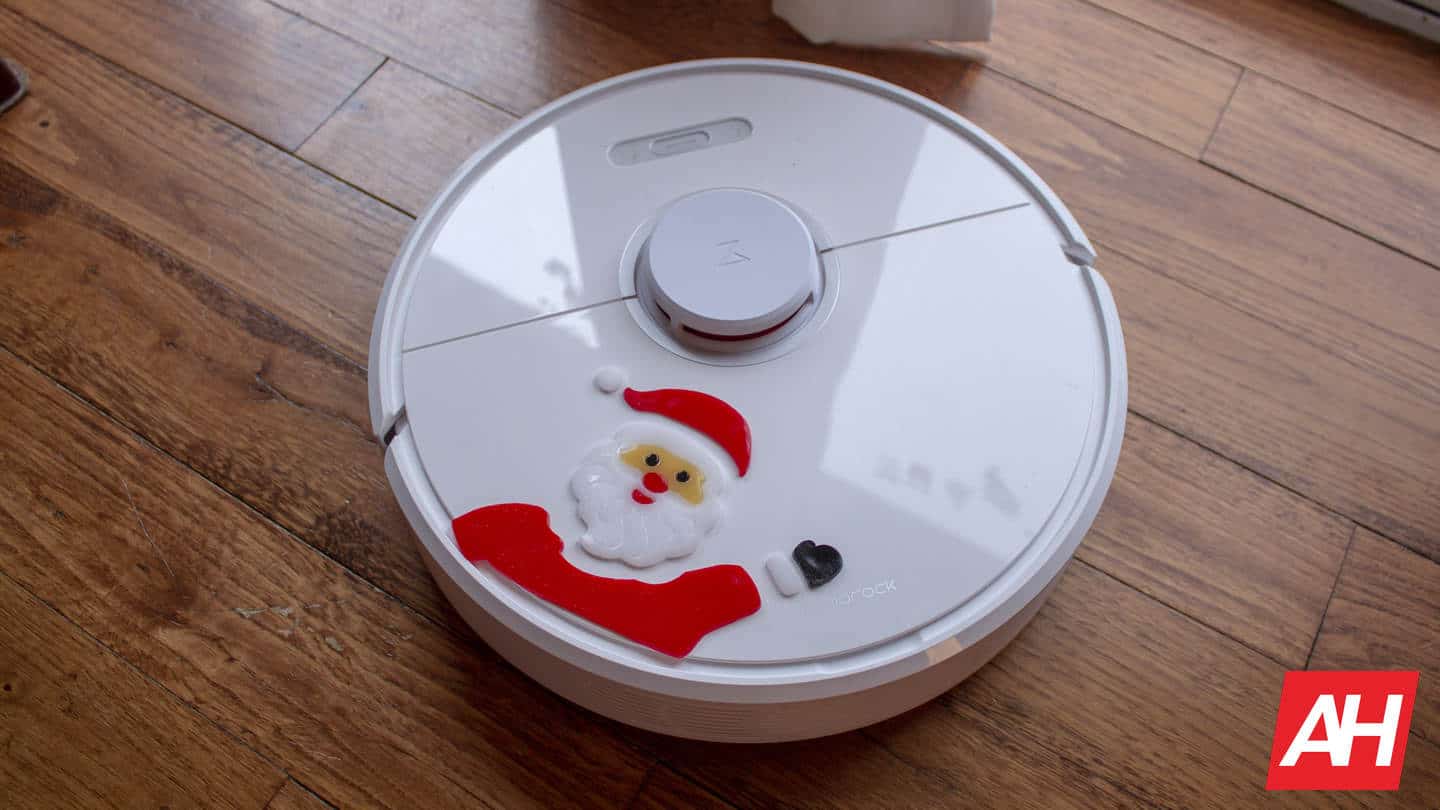 So you’re looking at your tiled entryway and wondering how the heck 30 leaves and a smattering of muddy footprints ended up soiling the beautiful grout lines. Oh yes, likely that’s to do with the group of people sitting at your dining room table at this very moment in time.

You could choose to ignore it and allow the mess to get worse, or you could get to vacuuming it before anyone notices.

Of course, if you use a regular vacuum there’s no way your guests won’t wonder what’s going on, and it’s likely some of them might even be a little offended you’re prioritizing your entryway over cuddling their baby.
While you were playing this scenario out in your head, your Roborock could have already begun cleaning up the mess. In fact, with Roborock’s versatile robot vacuums, you could easily have started a zone clean on the entryway and set it to make 3 passes, ensuring all those leaves get sucked up. At this point, you’re surely understanding why this is, indeed, the perfect gift.

Don’t forget to drop the mopping attachment on to clear away the mud though, and be sure to check that it’s set to quiet. The 35dB generated by the vacuum is quieter than the conversation that’s going on at the dining room table, and it’s likely your guests will think you’re brewing up some magic as they make their way around your spotless home at the end of the night.

Once everyone’s out, it’s easy enough to schedule a thorough cleaning for the morning, set at the maximum suction level, to make sure all the nooks and crannies of your home are back to their normal conditions. You’ve got to do something to stay sane when so much is going on!

Decorating won’t freak it out 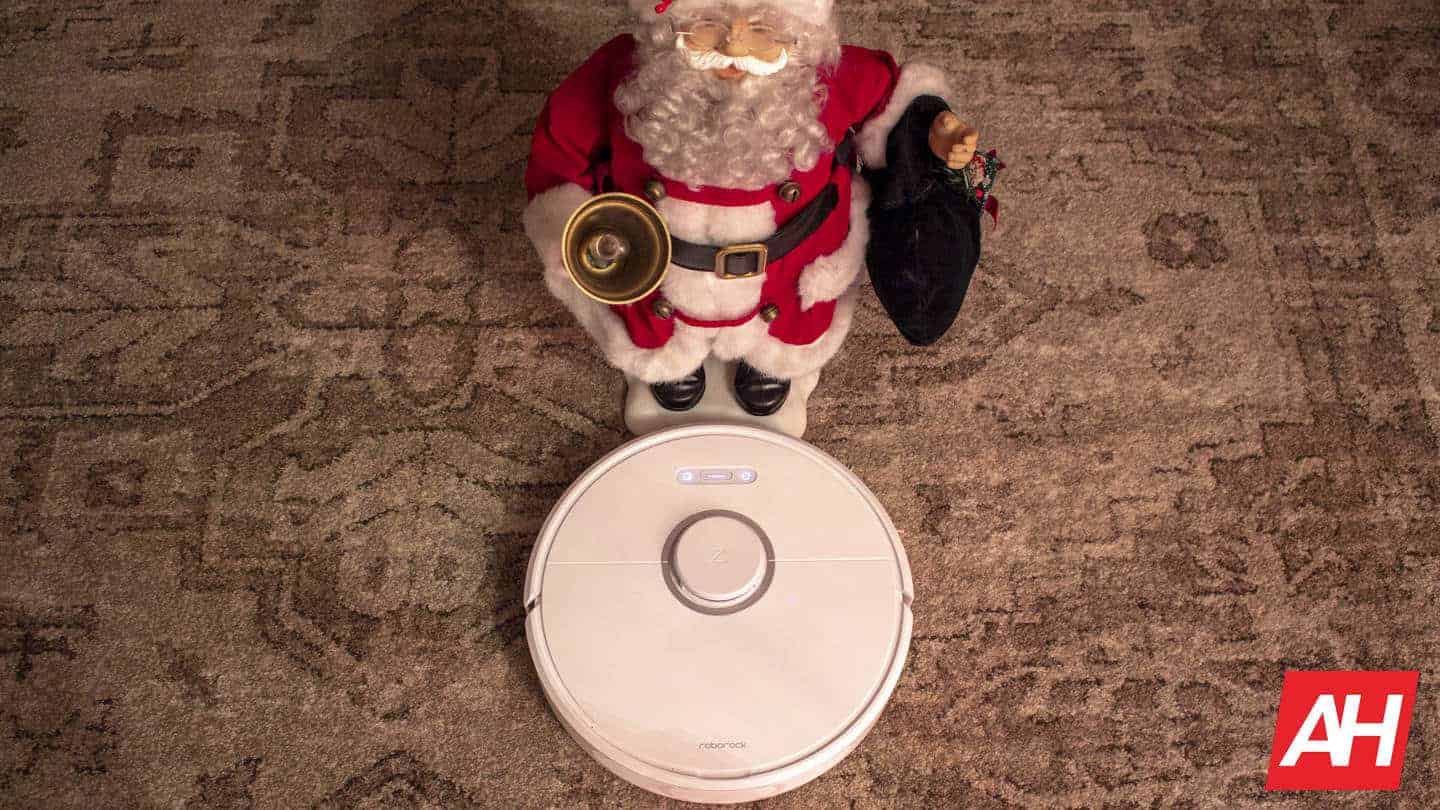 Let’s back up to the time just after Thanksgiving when you started decorating for the Holidays, though. While many intelligent robot vacuums will now map your home and give you the ability to clean individual rooms, not every company’s software is as smart as Roborock’s.

Moving furniture around and adding a Christmas tree to the living room could be enough change to freak out some robot vacuums. We’ve reviewed every major robot vacuum there is and this exact scenario has happened before (here’s looking at you, Neato).

Furthermore, what if you had to move the vacuum itself and didn’t feel like rebuilding the map? In many cases, Roborock can handle these changes without issue, as it knows exactly where it’s at in the house at all times thanks to the advanced laser-guided navigation and the years of experience behind Roborock’s team. 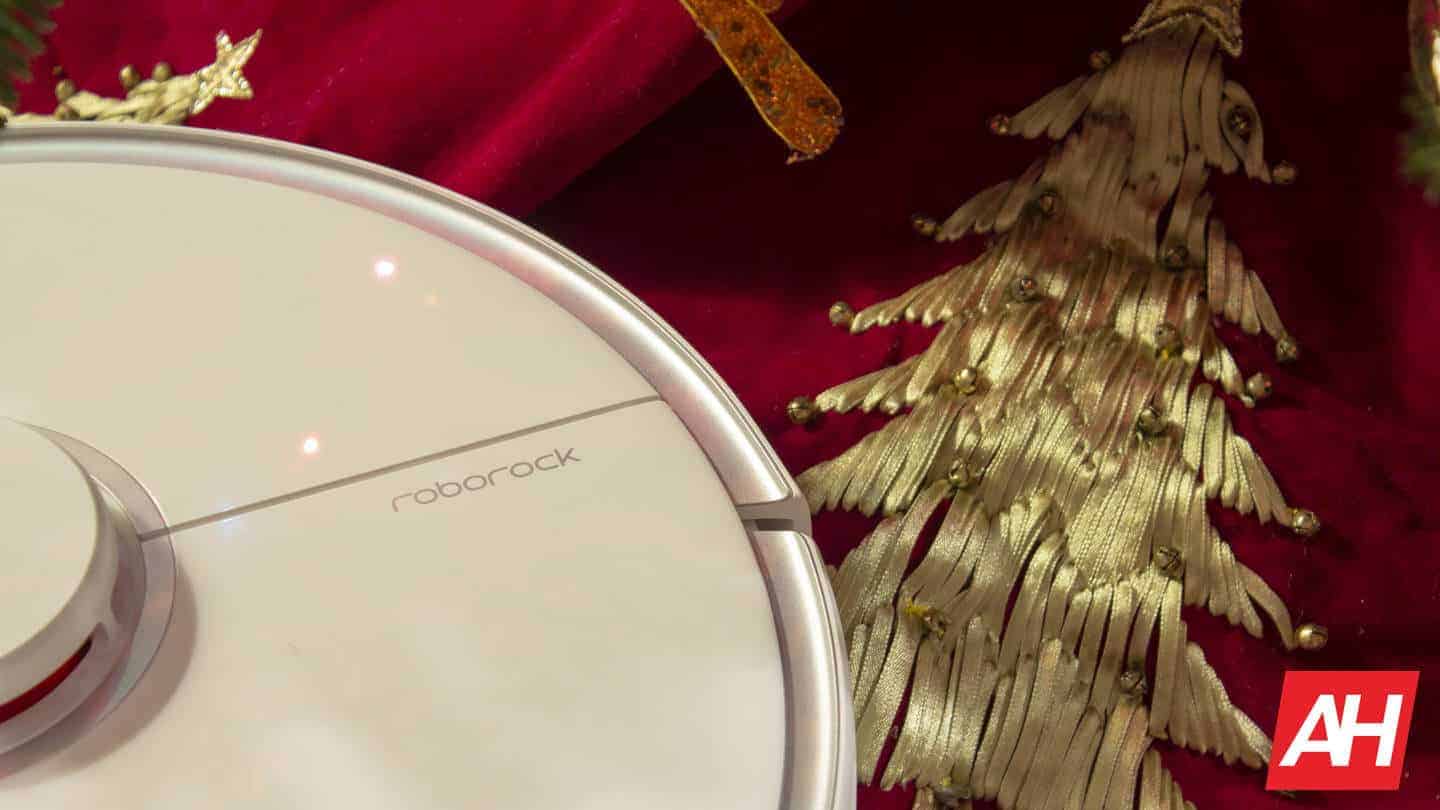 You may have had a robot vacuum before and don’t think that Roborock can get the job done, or maybe you’re just skeptical that a little roving circle can actually complete the task of replacing your regular vacuum. Be prepared to be surprised though, because Roborock will, most certainly, exceed your every expectation.

Aside from being generally impressive, though, having a small robot do the work for you is an unbelievable convenience. Larger vacuums are big and bulky. They’re heavy, and they’re really just a pain to deal with. This constant inconvenience leads to less usage, and less usage means a house that simply isn’t as clean.

With a robot vacuum, there’s no daily setup. You won’t have to drag it out of the closet and, depending on how bulky your vacuum is, you won’t pull your back trying to lug it around the house. The most you’ll have to do on the regular is empty the (relatively) small 600mL bin that weighs next to nothing.

You’ll find there’s also not very much in the way of routine maintenance. Roborock’s vacuums can run hundreds of hours before needing any kind of cleaning itself, and the app will help you keep track of these rudimentary tasks, too.

At most, you’ll need to remove a bundle of hair from the main brush or wash out the air filters to ensure suction stays at its peak. Even these tasks are simple, though, and Roborock offers the only washable filters in the business, meaning you won’t have to buy new air filters every other month to keep your vacuum sucking properly.