Skip to content
Advertisement
Trusted By Millions
Independent, Expert Android News You Can Trust, Since 2010
Publishing More Android Than Anyone Else
3
Today
3
This Week
502
This Month
4523
This Year
114552
All Time
Advertisement

It seems like Sony is planning to announce a new mid-range Xperia smartphone soon. That device has surfaced on Geekbench under the ‘K8220’ model number / codename.

This listing does not mention the company’s name, at all. There is good reason to believe this is one of Sony’s Xperia phones, though.

The model number shown by this listing is in line with Sony’s naming scheme. Sony’s model numbers usually start with a letter, and are followed by four numbers.

In 2019, a letter ‘J’ was used for the company’s phones, so we’re expecting the letter ‘K’ to be used in 2020. Presuming that this phone will become official next year, it fits.

At first, it doesn’t seem like this listing is very revealing, but you may be surprised. The CPU identifier used in this listing suggests that the phone will be fueled by the Snapdragon 765 or 765G.

Those two processors are almost identical. There is one notable difference, though, the Snapdragon 765G will be used in 5G smartphones.

In addition to that, the phone will ship with 8GB of RAM, and Android 10 out of the box. That actually suggests that this will be an upper-mid-range smartphone from Sony, not exactly your ultimate budget offering.

This phone’s benchmarking scores should be much higher

Benchmarking results of this phone seem to be a bit off, though. This listing suggests that the phone managed to score 465 points in the single-core test. It also says that it scored 1,757 points in the multi-core test.

As you can see, that is quite a difference, while the two phones should be extremely close in terms of benchmarking results. Well, it’s quite possible that Sony’s phone is limited in terms of performance at this stage of its testing. That also suggests that it will launch next year, as it doesn’t seem to be ready just yet.

We’re not really sure when exactly will this phone arrive, but it sure seems like we’ll have to wait until next year. This may be one of the devices Sony will announce at MWC 2020, if it doesn’t launch sooner than that.

Sony has been focusing on flagship phones lately, so this will be a nice alternative for those of you who are looking for something more affordable from the company. 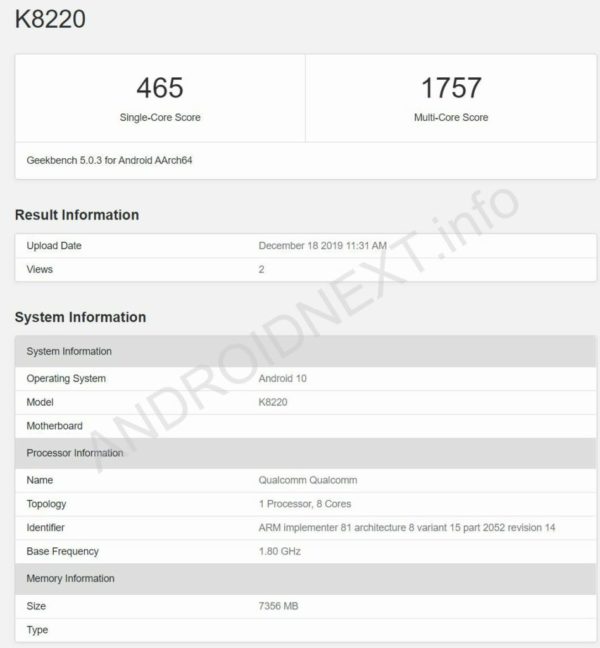