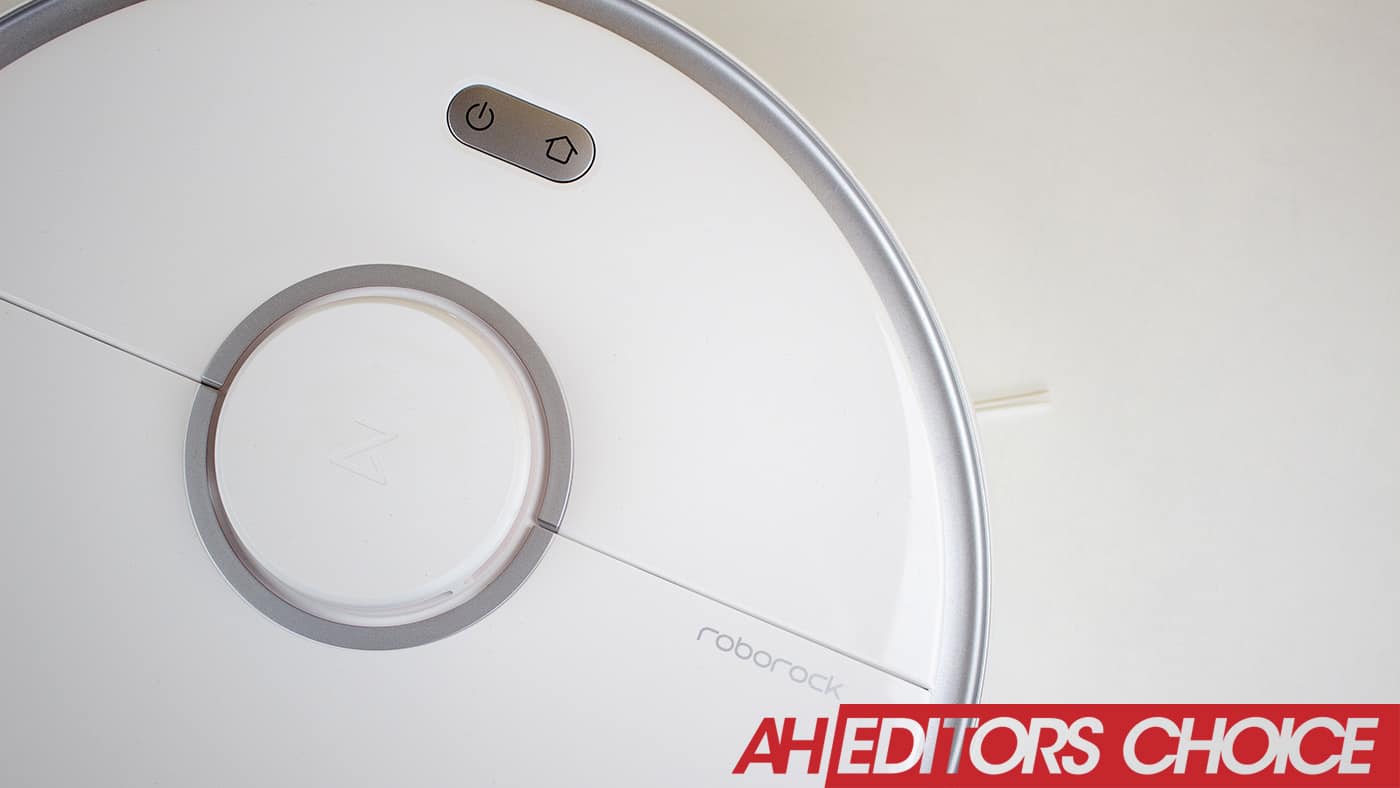 There's a new king in the world of robot vacuums.

The Roborock S5 Max represents the third major robot vacuum that Roborock has released in 2019, and it's in this latest product that we see the culmination of Roborock's R&D take form. Paramount to the product is a brand new mop attachment that works better than ever before, and a software update that perfectly parallels the hardware improvements for the Roborock S5 Max.

Roborock is no stranger to the robot vacuum market, but 2019 is the year the company really ramped things up and began providing a huge range of products; a stark contrast from previous years where they might have launched one or two robots. From the $200 to $600, Roborock has a robot vacuum that fits just about every need and budget out there, and we've seen nearly half a dozen new robots from the company just this year.

Rounding out the year, the Roborock S5 Max represents the biggest technical achievement since Roborock stuck a mop on a robot vacuum and, before that, laser-guided navigation with real-time mapping. The cornerstone of this latest release is the new mop attachment which, on the surface, doesn't appear much different from previous Roborock models.

That all changes the moment you first attach the mop onto the Roborock S5 Max.

A spring in its step

If you've used most robot vacuums, especially other Roborock vacuums, you might have noted that the mop attachments sit a bit loosely on the back. That's because they're designed to let gravity do the work of pressing down on the floor and to also help with variations in surface height.

The Roborock S5 Max changes all that by adding a spring-loaded mechanism to this mopping attachment. That spring presses down at a pressure equivalent to a 300g weight and represents a similar force to a human manually mopping with a wet Swiffer.

Simply put, that means the Roborock S5 Max will actually scrub your floors it passes over them, delivering a better clean.

It also means that the mopping pad isn't reliant on gravity to get the job done. If you've ever used another robot vacuum with a mopping attachment, you might have noticed that the floor is evenly wet when the robot first starts cleaning, but there are obvious tracks and spots where the pad didn't quite reach the floor near the end of the cleaning cycle.

This is because other robots with mopping attachments rely on the weight of the water tank to push the mopping pad down. As the water tank empties, the amount of pressure pushing against the floor decreases, creating an uneven clean as the vacuum progresses.

This won't happen with the Roborock S5 Max since that mopping attachment is constantly pushing down at an even rate.

The mopping pad is also completely separate from the large 280mL water tank, which has multiple positive implications. First off, you'll be filling the tank less often than ever before thanks to the generous size when compared to most other robot vacuums.

You'll also be able to leave the water tank on the back of the robot, even if you don't have the mopping pad attached. That's less work to have to do on a regular basis and means you're more likely to want to mop your home on a regular basis, given that you'll normally just need to slide the pad attachment on the bottom.

It knows where to mop

This mode changes the behavior of the vacuum in a way that it obeys any "no-mop zones" you might have set up in the app.

As a recap, all Roborock vacuums utilize laser-guided navigation that can map your home in real-time. While it's vacuuming, it generates a detailed floorplan that's rated to be 98% accurate to the actual floor space measurement of your home. It will also automatically break this floorplan up into individual rooms and spaces, which can be later customized if needed.

You'll be able to set no-go zones, which are red rectangles drawn on the map to keep the vacuum from entering a specific space in your home (such as under the entertainment unit where there are cables). You can also set no-go lines to block off entire rooms or parts of your home, such as the hallway or the pantry.

The new Roborock app, which launched alongside the Roborock S4 in October, debuted a new feature called "no-mop zones", which act similar to no-go zones but are designed specifically for when that mopping pad is attached to the vacuum.

While the Roboock S6 is able to use the no-mop zones as well, the Roborock S5 Max packs in a brand new special set of features that rely on its ability to regulate the amount of water that makes its way to the mopping pad. This new hardware feature utilizes a peristaltic IV-style pump that can be precision-controlled via the app.

While controlling the amount of water flow to the pad via the Roborock app is cool, that's not the ground-breaking feature. What's incredible here is the ability to customize the settings for each and every room of your home.

That's full independent control of both vacuuming suction strength as well as the liquid flow for mopping, both of which can be set individually for each and every room of your house. Yes. Every. Single. Room.
That gets me more excited than it probably should, but it blew my mind to see this in action.

A total of four suction modes can be chosen from: quiet, balanced, turbo, and max. Four water levels can also be chosen from: off, light, medium, and heavy. You'll select one of each of these settings for any rooms you wish to customize cleaning for, otherwise, it'll just use the global defaults for cleaning.

This per-room settings behavior can also be paired with scheduling routines, meaning you can drop the mop onto the bottom of the vacuum before you go to work and have all your hard floors vacuumed and mopped without effort every single day of the week.

Alongside the aforementioned four modes of suction power, a new "gentle" mode can be selected when performing a whole-home or a zone cleaning. This new gentle mode is intended for when you just want to mop one of your tile, laminate, or wood floors and don't want or need the vacuum to suck much up.

This doubles as a way to keep the noise down, as the vacuum is whisper quiet when in this mode. In fact, the only real noise generated is from the motor as the wheels move, and from the pump as it shoots water into the mopping pad. It's as quiet as it gets.

While it's not quite as quiet as the Roborock S6, the Roborock S5 Max is still one of the most powerful, quiet robot vacuums on the market. I love to run a test where we watch a movie while the robot does its thing, just to test the noise level. While you can definitely hear the Roborock S5 Max operate in the house, it's not going to ruin the movie.

The 2,000Pa suction also means it'll suck up anything in its path, even on thick carpets.

The vacuum is also able to run up to 3 hours on a single charge and, for those very large homes, can head back to the dock and top up the battery in order to finish the job.

Battery charging is as efficient as everything else Roborock makes, and you'll find that the vacuum will return to the dock when 20% battery is remaining, and it'll charge up to the 80% mark in order to finish the home. This 60% range charge happens quickly; much more quickly than if it were to return to the dock near 0% and waited until 100% charge to resume.

This ends up reducing the final cleaning time by reducing the charging time between cleaning cycles. You'll also find that Roborock's navigation is just plain smarter than other robot vacuums, as it can measure the size and shape of an area and plan a path that's most efficient for the space.

Take a long hallway, for example. Many robot vacuums would clean the hallway in short lines, going from the left wall to the right. This is inefficient because it takes extra time to take a 180-degree turn and drive back again.
Roborock would recognize that this long hallway is better cleaned by driving down the hallway and back up again, reducing the number of times the vacuum has to turn around, better filling in the space.

This sort of calculation means that Roborock vacuums won't just get into more areas of your home without trouble, it also means they'll finish cleaning the entire house quicker as well.

That large 280mL water tank for the mop means that, even if you have up to a 2,600 square foot home that's entirely covered with hard floors instead of carpet, you can mop the entire thing on a single charge and a single tankful of water.

Roborock's 2019 vacuums (S4, S5 Max, S6) all include a brand new main brush design that makes it easier to remove hairs, carpet strands, and other long strings that normally get wound around the bristles. Aside from packing a tool under each vacuum's lid, the sides of the brushes can be unlocked and removed so that these strands can be effortlessly slipped off the brush.

Roborock also built the filters and mopping pads to be environmentally friendly and reusable without sacrificing performance. The anti-allergen filter can be washed several times to help remove stubborn dust that gets stuck inside, and the cloth mopping pads can also be machine washed to ensure a sanitary cloth is cleaning your floors.

The biggest downside for me is the continued inability to actually sanitize your floors, as the water tank is only rated for water usage. You could always spray your floors with some kind of cleaner before mopping them, but this isn't a recommended practice and could lead to slippery floors.

I also didn't really like the new dock design. Previous designs have rubber feet on the bottom and clip onto the charging base to keep the mop from soaking your floor while the vacuum charges. This new design has sticky tape on the bottom that keeps the pad in place permanently. On the bright side, this design mitigates the possibility of your dock or floor protection pad from slipping or being dragged to the wrong place.

The one to beat

If you've got hard floors in your house at all, whether it be tile, linoleum, vinyl, wood, or some other material, this is the absolute best robot vacuum you can buy. The new per-room cleaning features are a game-changer in many respects, especially when it comes to mopping and scheduling, and being able to control the mop's wetness level straight from the Roborock app on your phone is oddly satisfying.

If you don't need mopping functionality or just want to save a cool $200, the Roborock S4 is the only other choice that makes this much sense right now. It's really just a no brainer to pick between these two.