Gree Electronics is a Chinese company that not many people outside of China are familiar with, and yet, the company is planning to release a foldable smartphone, it seems.

This company has patented a new design for a foldable smartphone. Gree Electronics has applied for this patent back in April, and it has finally been approved.

The company is manufacturing home appliances, and it’s really good at it. I manufactures air conditioners, heating equipment, ventilation equipment, refrigerators, and much more.

Based on this patent, though, Gree Electronics is planning to come back to the smartphone space. Interestingly enough, its comeback could be marked by a foldable smartphone.

Gree Electronics may see a way to become far more relevant in the smartphone space this time around. It has tried to make an impact, but it failed. That may change with a foldable phone, though.

This is a brand new form factor, and companies who get it right fast could have quite an impact. It is a general belief, more or less, that foldable smartphones will take over sooner or later.

Samsung, Huawei, and Motorola had announced their foldable phones already, and the same goes for Royole. We’re not sure if Gree Electronics will announce its foldable smartphone anytime soon, or at all, but this patent gives us hope.

That’s not the only patent that the company submitted lately, though. Gree Electronics also submitted patents for facial recognition, and a new graphical interface. So, it definitely seems like it is planning to get back to the smartphone space.

If Gree Electronics is working on this foldable handset, however, chances are it will become official sometime in 2020.

Speaking of foldable phones, Samsung is expected to announce the Galaxy Fold 2 in February. That phone will become official with the Galaxy S20 series, almost certainly.

Huawei will also introduce its revamped version of the Huawei Mate X. That announcement will take place at MWC 2020, most probably. 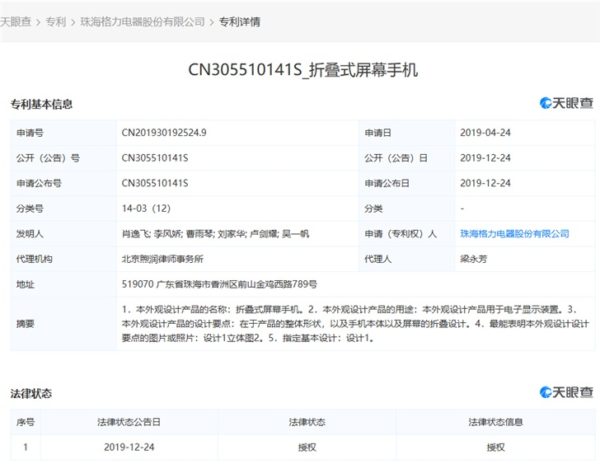