App Annie has published some fresh new information regarding the state of mobile apps and games. In this article, we’ll focus on apps, while the games portion will be left for another piece.

That being said, the company has announced that consumers, on a global scale, are on track to download a record of 120 billion apps across the App Store and Google Play Store in 2019.

That marks a 5-percent year-over-year (YoY) increase, compared to 2018, of course. Do note that App Annie stats do not include apps that are installed via third-party sources. It is also worth noting that these are new downloads, re-installs and app updates are not included.

App Annie also notes that 2019 marks the highest point in consumer spending as well. It grew approximately 15-percent YoY, and will approach $90 billion worldwide by the end of this year. Once again, this does not include apps from third-party sources.

Games are, of course, the largest source of income for developers. Outside of games, though, it seems like Photo & Video and Entertainment categories raked in most profit in 2019. That trend is expected to continue with the release of Disney+ and similar services.

App Annie highlighted the most popular apps of 2019, along with some additional info 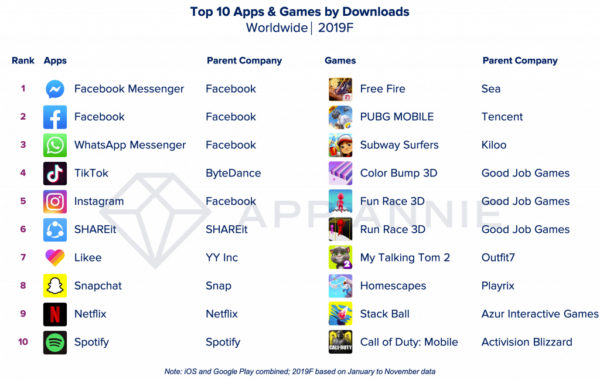 That trio is followed by TikTok, Instagram, and SHAREit. Likee, Snapchat, Netflix, and Spotify complete the top 10 list.

In terms of consumer spending, Tinder is number one. It is followed by Netflix, Tencent Video, iQIYI, YouTube, and Pandora Music. Youku, LINE; Kwai, and LINE Manga complete this list. 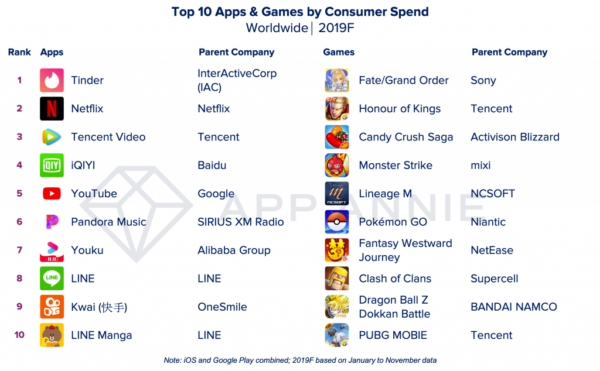 At the end of its report, App Annie once again highlighted that 2019 has marked all-time highs in terms of app downloads and consumer spending. 2020 will be even higher, according to the market research agency.

The mobile app industry is still growing at an incredible pace, and it seems like there’s no stopping it, at least not anytime soon. It’s never too late to release an innovative app to the market, and grab everyone’s attention.