Call of Duty Mobile has been a worldwide success since its launch in October, so much so that it has made App Annie’s breakout games list for the year. Alongside lists for most downloaded apps and most consumer spend.

Granted, it didn’t take the number one spot. Or even the second, third, or fourth spots. It actually sits right in the middle as the number five most breakout game.

That’s still an accomplishment though considering how many games were released this year. And, an important thing to remember is that Call of Duty Mobile still has other accolades. It’s still the second most downloaded mobile game in history, for example, in its first week. The top spot for that goes to Pokémon GO.

Call of Duty Mobile wasn’t the only anticipated breakout game

Call of Duty Mobile wasn’t the only highly anticipated mobile game of the year to make the breakout games list. Nintendo’s Mario Kart Tour was also on the list, coming in at number eight.

This is after numerous complaints from fans after finding out that Nintendo was charging for things like a Gold Pass. And implementing various micro transactions. Despite these things that some players hate, the game has still been a major success for Nintendo. And perhaps to no surprise. Mario Kart is one of Nintendo’s most beloved franchises. And the game is very good even with its flaws.

Mario Kart Tour wasn’t one of the games where people were spending the most money this year. Even if it was extremely popular. Call of Duty Mobile wasn’t on the list of top consumer spend in games either.

PUBG MOBILE was though, which is another game that was published by Tencent. It comes in at number two on this list, where another Tencent game, Game for Peace, takes number one.

Subway Surfers was the most downloaded game of the past decade

Call of Duty Mobile and Mario Kart Tour may be two of the more popular new games, but older games still impress.

Subway Surfers is that game. According to App Annie’s report it was the most downloaded game of the past decade. An accomplishment that should be more impressive simply because of how old it is. 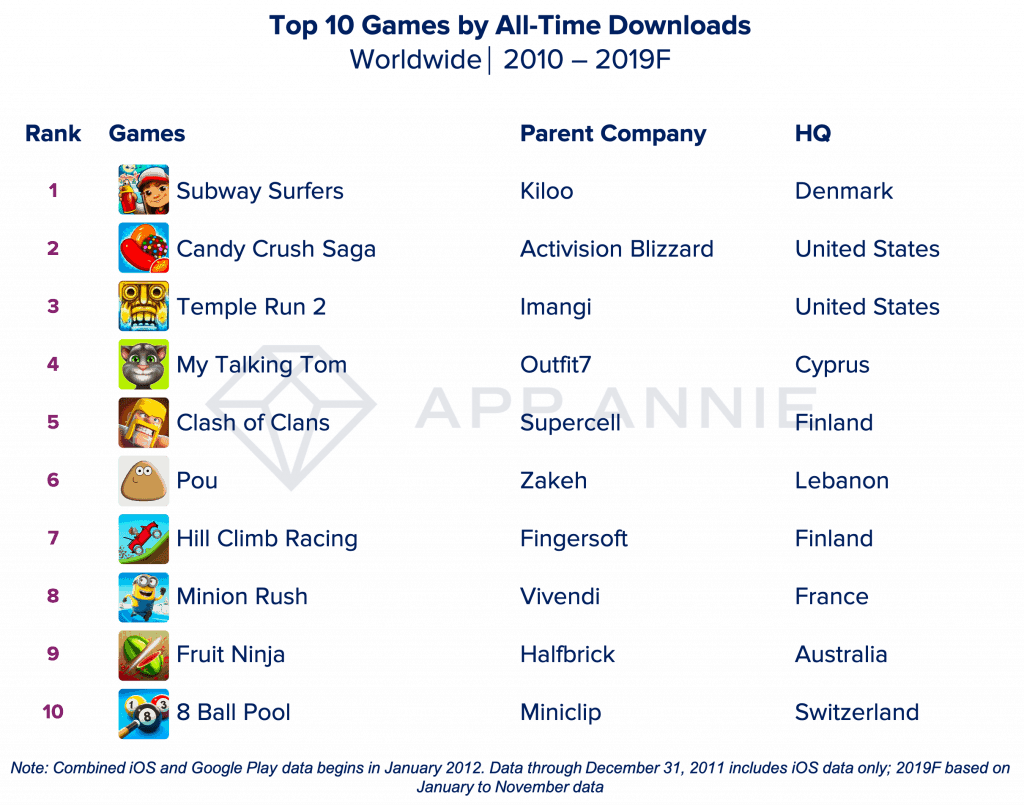 Then again maybe not. Kiloo, the company behind the game, has continued to keep it updated and relevant. It’s brought in new players with new content over the years. Which in turn seemed to be keeping long-time players engaged as well.

Now these aren’t just Android numbers. The numbers are pulled from both Android and iOS, and this is also global. Still, it just goes to show that people still love older games too.

This is all the more evident when you look at the other games on the list. Temple Run 2, Candy Crush Saga, Fruit Ninja, and My Talking Tom are all fairly old as well and have been around for years.

Going into 2020, users should expect to see games like Call of Duty Mobile make the list for top consumer spend. It might even be at the top if it stays popular enough. Though PUBG MOBILE would be a tough game to beat here.